So, not a great one to talk about this time, but here goes.

I had made contact with Scott, a CIA-contributor from Washington DC, who is in London for a fortnight, and made arrangements to meet up with him. He arrived into London on Saturday afternoon.

Drove into Frome, picked-up Glenn at 8.30am and then to Dave and Karen’s…Karen doesn’t mind driving and so she drove us up. We had to recalculate petrol surcharges in light of the increases of late. Negotiations were long and hard, but a compromise was eventually found!

Into the Yadana Café on Lillee Road, just as four other Frome boys were leaving. I sat myself down to my first Yadana Fry-Up of the season…just as Scott arrived on the scene. I launched into the breakfast ( for all the expats, I include this for you…do you miss home? Bacon, sausage, fried egg, fried bread, grilled tomatoes, baked beans, black pudding, bread and butter, £4.60, thank you very much, matron! )

Scott looked a bit queasy when I offered him some of my black pudding, with full explanation of ingredients of course.

I believe that this was Scott’s third game at HQ – we chatted about previous visits, then hot-footed it a few yards into the cozy confines of The Goose. Good news – as promised Scouser Reg had opened up early at 10am and a few of the boys were already on their second pint when we arrived at 11am.

Four pints in two hours isn’t particularly heavy, but they went down really well. The air was dead muggy outside and the occasional slight drizzle meant that the beer garden was sparsely-populated…most people were crowded inside. Only two hours “pre-match” meant that a lot of ground had to be covered. There was obvious chatter amongst a few of us about plans for European travel to foreign lands…Gary, Alan and me are off to Rome in November, but Rob from Essex is off to all three…can you believe this? He is going to Cluj via Dortmund and the LGW to Dortmund route via Easyjet is just £1. It’s obvious that all of the CL regulars are well-honed in European travel now and – if you look in the right places, bargains can be found! Alan had booked us into a good Rome hotel for our trip, so we were sorted.

Tried my best to include Scott in as many conversations as possible. Difficult to get to know someone while chatting to ten other chaps at the same time! I had brought up my NYC photo album and I went over to show it to Daryl and Neil ( brothers… Daryl a Yankee fan, Neil a Mets fan ) while Glenn took care of Scott. I think Scott was loving the pre-match beers – his Carlings were going down very well. I had brought Neil a few things over from New York. The pub got busier and busier. Had a quick word with the guvnor – I told Reg that his pub has now reached mythical status amongst the CIA board members. I should get a discount, the amount of Americans I have got to drink chez Reg.

Good news – the dodgy toilets have been refurbed over the summer. You no longer need to wear Wellington boots…and there is no longer a “shallow end” and a “deep end” in the Gents.

1pm soon came around and, with the taste of the lager still in my throat, I made a bumbling approach down the North End Road, chatting to Scott about the road’s brief cameo role in “The Football Factory” – the cab ride, in case you are wondering. We called by the stall infront of the town hall and I made sure Scott purchased a copy of CFCUK. I bought a copy of Mark Worrall’s “One Man Went to Mow”, on sale for just a tenner. It details the exploits of his bunch of mates in travels around the UK and beyond. It’s easy to read and doesn’t delve into the hoolie side of life which I guess is to be commended. Some fantastic photos in there from the dark ages of the eighties. I will enjoy reading it and may well do a review.

Got in to the MHU a bit late again…still problems with the new swipe cards. I have learnt my lesson – will leave the pub ten minutes earlier from now on.

Spurs had the larger 3,000 away allocation, but I spotted ( with my zoom lens ) many empty seats.

I had seen the opener against Pompey in the Shed Upper, so I said “hellos” to the familiar 15 or so faces around our seats in “Sleepy Hollow.” So good to see Tom again – he had suffered a heart attack just after the United league game in April…then again the day after Moscow. Two trips into the hospital over the summer has sorted him out though.

What shall I say about the match? I was surprised to see Belletti in the holding role. Overall, the performance by Chelsea wasn’t good at all…only Essien – possibly Belletti in his unfamiliar role – did OK in my book. It reminded me so much of the game, not long into Mourinho’s reign in 2004 – when they “came on the bus and parked the bus in front of the goal.” Certainly as frustrating as that game…but more so…we were without invention, without too much enthusiasm…this was almost a sub-Grant performance. And it wasn’t as if Tottenham were that great. In the second-half, they hardly threatened at all.

I couldn’t help but think about the positions of the two clubs going into the game…Chelsea Top Tottenham Bottom ( how good does that sound ) and how nasty it would be should we lose. February 1990 remember!!! Eighteen home league games unbeaten! Where were you in February 1990? I was in Canada…so – get this – the last time I had seen Chelsea lose at home to Spurs was in 1986 I think!

My second ever game, in October 1974, was against this lot…and although I am not sure, I think I have seen Chelsea play Spurs more times than any other team…maybe them and Liverpool.

There’s just something about them. They virtually relegated us in 1975. But there’s more than just one reason!

The game drifted along…we went 1-0 up, but the crowd didn’t seem energised. I commented to Alan that the place was dead…and he said that the pace of the game tends to die I the last few minutes of the first period…the crowd were certainly quiet. Then it happened – a mix up and the game is tied at 1-1.

Great to see Claude Makelele on the pitch at half-time. A true Chelsea legend.

The second period was worse than the first…I developed a four pint headache in the summer sun. I became annoyed with our lack of cohesion. The Wigan game was better – at least they gave us a fight.

I texted a few Americans – you know who you are – as the game petered out. Of course, the Spurs supporters celebrated as if they had won the league. Ho hum.

I walked back to the car and bumped into Dutch Mick again. We had a good old chat to each other about things…Beth – he can’t believe you are fifty!…but the talk was mainly of a poor Chelsea performance, one that leaves more questions than answers.

Got back to Frome at 6pm, just in time for me to play five-a-side in the Sport Centre. However, after just five minutes, I pulled a calf muscle and hobbled around for the rest of the game.

It was one of those days. 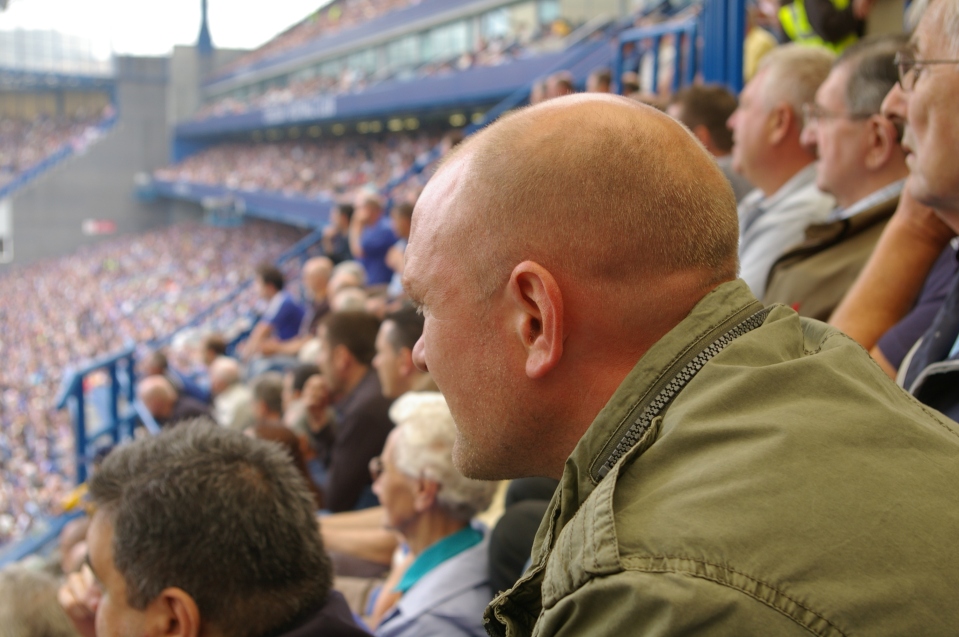