I don’t know who decides which games are brought forward to 12.45pm on Saturday lunchtimes, but I would imagine that they must be having trouble getting by with half their brain missing.

I don’t object in principle to early kick-offs, but why not limit it to local derbies…heaven knows there are enough this year, with clusters of teams in London, the Midlands, the North West and the North East. It’s just crazy to expect Chelsea fans to turn up for an away game on Teeside on a Saturday lunchtime.

However, with all that said, I was looking forward to the trip north. I am not a big fan of cars per se, but I love driving. This jaunt would be the longest round trip I have ever done following Chelsea in my own car, on my own steam, me at the wheel all the way…well, in the UK anyway. A couple in the US were much longer.

Up at 4.30am and I pulled out of my drive at 5.10am, everyone else still slumbering. Made myself a coffee for the first part of the trip and that went down well. A little drizzle as I raced through the deserted streets of Bristol. I texted my good mate Alan to let him know I was “on the road.”

He was “Reg Varney” ( on the buses )… in fact on the sole CFC official bus, which pulled out of The Bridge at 4.30am. Although he only lives eight miles to the south of Chelsea, down near Palace’s ground, he had to be up at 2am. Thank you Mr Lobotomy Man at the FA. Alan told me that Radio Five Live were going to interview “Eileen” at 6am, giving her a platform to air the views of the disgruntled fans on board. As it happens, I just missed her on the radio. Five Live were doing a section on long-distance fans and one guy phoned in to say he lives near Manchester, but is a season ticket bolder at Hamburg. I’m sure that a fair percentage of Saturday traffic on the UK motorway network is made up of football fans, each on their own particular pilgrimage to far flung outposts.

It was quite a sight to observe the sky lightening in the east, just as I drove past Worcester. Then around the M42, by-passing Birmingham. I was making good time and stopped for a McBreakfast at 7.20am, just before hitting the M1 at Nottingham.

A brilliant, dazzling sunrise at Nottingham, the sun piercing the sky behind the immense cooling towers at Nottingham. An amazing sight.

After about twenty minutes, I pulled into Tibshelf services for ten minutes as Alan’s coach had stopped there for an hour. Said “hi” to our mate Gary – Alan’s away day partner – and also Mark from Sudbury, who I first met in that 1983-84 season. Spotted Gill, who I first met at Nevada Smiths on the 2005 US tour. She travels up from Kent to all away games with her son Graeme.

Anyway, onwards and upwards, past Mansfield, Chesterfield, Sheffield, Doncaster, signs for dirty Leeds, then skimmed past Wetherby and Thirsk. Light drizzle again as the North York moors loomed ominously on the horizon. Some of you may remember that last season I stayed at Whitby with Judy and met up with my old college room mate Chris for the ‘Boro game. This year, much the same story. I soon reached Thornaby On Tees, Chris’ home town, at about 10am and soon found myself at Chris parents’ house.

Now, I don’t go along with the strongly-held view, cherished by a lot of southerners ( especially Londoners ) that anywhere north of Watford is a hole. I love travelling to each of the cities for away games and try my best to find some nice aspects to each place I visit.

But Middlesbrough is tough. When I first met Chris in 1984, even then he told me that Thornaby wasn’t a great place to live. This was my first visit really…it’s an overspill town for Middlesbrough and is completely characterless and charmless. The town centre, currently being dismantled and rebuilt, was 1960 ugliness to a tee.

Anyway, his Mum had brewed-up and we had a chat with a nice cuppa tea.

We then drove to his sisters before getting a cab to the ground, only about three miles away. It was the same scenario as last year – Chris, his Dad, his son Michael and his brother in law, Richard, ‘Boro fans the lot of them…and me.

On the way to the Riverside, the huge, sprawling ICI chemical plant to the east of Middlesbrough could be plainly seen. This is the plant that gives Middlesbrough fans their self-deprecating nickname of Smoggies. I think if you come from Teeside, you need to laugh at yourself. Smoke billowing out from a few chimneys could certainly be seen. Not pleasant.

The stadium is located on land which was obviously where wharves and warehouses had been located, adjacent to the massive frame of the Transporter Bridge, straddling the Tees. ‘Boro used to play at Ayresome Park and I like the fact that the original gates from their former ground have been relocated in front of the bright red entrance to the main stand at The Riverside. There are two statues of former players in the same area…a nice touch. I wonder when our Peter Osgood statue will be appearing at The Bridge.

Unlike in previous visits, where the away fans were located in the SE corner, away fans now are more centrally located behind the East goal. Alan, Gary and myself were in the back row of the front section. I took some nice close-ups of the boys during their pre-match stretches and shuttle runs.

Our mates Andy and Neil, from Nuneaton, were two rows in front. Had a quick word of sympathy with Cliff, the guy fined for protecting his son from police brutality. Pathetic.

I noted many many flags and banners dotted around the rear of the four stands of The Riverside. One said “Our Team, Our Club, Our Teeside.” Yeah, and you’re bloody welcome to it. One said “Spirit of ‘86”, a nod to the year in which the club were almost wound up…those Ayresome Park gates were memorably locked amidst fears of liquidation…hard to believe that the team then won consecutive promotions from the Third and Second Divisions, including an infamous play-off victory against us…for a few years, I hated ‘Boro…the 1997 FA Cup Final win eased the pain!

‘Boro’s signature tune “Pigbag” ( a dance track from 1982, years ahead of it time ) welcomed the teams onto the pitch. The home end held up cards to say “One ‘Boro.” The Chelsea support rallied with songs about meadows and celery.

Alan made the very pertinent point that through the use of mosaics, banners and piped music, the clubs these days do all they can to promote a “happy, feely, bouncy” atmosphere at games…but stand up and step out of line – and you’re out! A real paradox, eh? My mate Andy was almost banned from football four years ago on a visit to this stadium when he had the temerity to celebrate a Chelsea goal a little too near the perimeter fence ( he didn’t go onto the pitch ) but after two court appearances, he got away with a warning. Andy is a fine CFC fan, he goes everywhere and this really got to him.

What a performance, eh? Yep, Middlesbrough were pretty poor, but we did play some sweet stuff. I think all the plaudits have gone to Malouda, Kalou and Super Frank, but I would like to say a good word for Mikel, who broke up a lot of ‘Boro’s moves, especially in the first half. He seems to mature with each game.

What a strike from Juliano…so similar to the goals against Wigan and Spurs last season. That boy can certainly hit a ball. We had a great view of that one, but an even better view of Frank’s glancing header which was the endpiece of a beautiful flowing move. We scored four goals in just 16 minutes and the Chelsea choir responded in the only way we know –

It really was a top-notch performance and it equalled my highest ever Cherlsea away win ( 5-0 at Wolves in 2003 ). Loads of positives – lovely passing and movement…long may it continue.

I was soon out of the ground and quickly met up with Chris’ family. His ten year old son Michael was inconsolable. I really felt for him. I joked that they must be sick of the sight of me. Next year, I won’t meet up with them, I promise! Luckily, our cab was waiting ( how good was that! ) and I was soon saying my cheerios to Chris’ family. His Mum had prepared a little packed lunch for my long drive south and I left Thornaby at 3.30pm, feeling very pleased with the result.

The traffic was fine on the long drive home…I began listening to the football on Five Live, but after wins for the Goons and Liverpool, I couldn’t face listening to a United win. As I raced south, I listened to a few bands from my youth. Echo and The Bunnymen at Tamworth, The Stranglers at Tewkesbury, The Buzzcocks at Bristol.

As I drove through Midsomer Norton, Pete Shelley was singing “Everybody’s Happy Nowadays.”

Well – Chelsea fans are, for sure.

I reached home at 8.15pm…560 miles on the clock and another three points in the bag.

Roma – you are next. 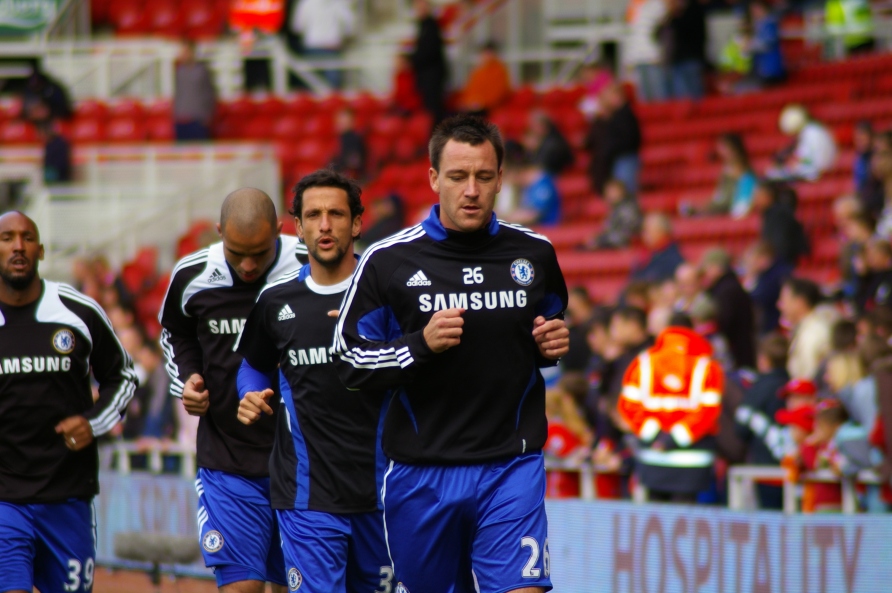