We rode our luck a bit, but so pleased we didn’t lose to United.

We all left Frome at 8.45am and were soon zipping east up the A303 and M3 into London. A beautiful Autumnal morning.

The others were off into the caff for a fry-up, but I made a bee-line for Fulham Broadway as I had heard that both Mickey Thomas and Paul Canoville were doing book-signings at both the “Borders” bookshop and the CFCUK stall opposite the tube station. I popped into McDonalds, where Alan, Daryl, Neil and Ed were polishing off a McBreakfast…they had just come from the stall themselves where they had a natter with Mickey.

Mickey Thomas was signed from Stoke City in January 1984 and he, ironically, took Paul Canoville’s place on the left wing in that fabled promotion team. He added that extra dimension, a ball-winning left-sided winger whose all-action style and infectious personality sparked extra life into an already rampaging club on its progress to Division One that season. He had previously played for Manchester United, of all teams, and so I was slightly dubious of his play…his move from Stoke involved him moving down a division, so maybe I thought he had passed his peak.

I couldn’t have been more wrong – I saw his home debut against Wednesday and was immediately smitten. He scored the first two goals in our 3-2 win ( a massive 35,000 gate when the average top flight gate was only around 25,000 ) and he ran his heart out. Instant affection from us in The Benches. He developed an instant rapport with the thousands of pastel-wearing Chelsea lads that day and it was a match made in heaven…or actually Wrexham, where fellow team mates Joey Jones, Eddie Niedzwiecki and manager John Neal had first encountered this wayward genius.

I bought Mickey’s new book “Knockups, Hiccups, Lockups”, had my photograph taken with him and mentioned that I had last seen him in the away end at Blackburn in 2006, when I mentioned that he was in my all-time Chelsea XI. On that day, he seemed genuinely pleased with my comment and he thanked me again for that. I know he does some match day work for Century FM in Manchester and so I said that, despite doing work for United, I wanted him to know that he is loved at Chelsea.

And, yes, another echo of that 1983-84 season…Twenty-Five Years ago. Where does the time go?

Paul Canoville had not yet shown up ( Daryl joked that he was probably still phoning all of his children to see how they were! ) so I sped back to The Goose where I joined the boys in the beer garden for three cold pints. I gave a truncated match report from the U18s 4-1 defeat at Bristol City on the Saturday morning. It wasn’t great.

Spent a nice and relaxed two hours in the pub, looking ahead to the next few games, trying to plan who would pick up match tickets for who, planning on meeting Simon and Milo in Stoke next week.

Daryl, Neil and myself – the baseball trio – had a quiet few moments of reflection on Yankee Stadium’s last ever game in the small hours…I’d tape the game, but also see how far I could get watching live.

Myself and the Frome boys were saying that we would be happy with a draw – that unbeaten run means so much. But Simon and Daryl were having none of it – their view was to take the game to United…they thought that at times the unbeaten run had cramped our adventurous spirit at times. An interesting opinion. We also talked of Zola at West Ham. I mentioned that I read about a bloke in CFCUK say recently that he was happy when the little man scored against England at Wembley in 1997. I had to agree…I was sat next to Daryl at that game and we both did a little “yep” as he scored past Walker ( ? ) in the England goal. I would imagine the same thing happening should Tevez score against England, if the “Argentina” choruses are anything to go by at Old Trafford.

We walked to the stadium and at long last I got in with time to spare.

Rob had tipped me off that several key supporters ( and Roman ) had paid for a new bigger “Pride Of London” flag and this was being passed over the heads of the MHL as I took my seat. It’s not as big as the 1994 one, but way bigger than the 2007 incarnation. Rob tells me Roman has stumped up for a new away flag too. That’s good to hear.

The game? United bossed the first thirty minutes. They took a deserved lead, but thankfully seemed quite content to let us back into the game. To be fair, I thought we struggled for long periods. I lost patience with Malouda, who seemed unable to get in the right position…too often he would stray inside, drop deep, generally show little positional sense. Mirroring his approach play at Eastlands, Anelka, too, often came too deep.

A shame we lost Lord Percy, but Alex was my man of the match. JT – I have to say – has had a few ropey games and was again at sixes and sevens at times.

But we kept going – I was getting behind the team, urging them one…a few nice moments when the crowd got it together, but it wasn’t that loud.

Thought the free-kick which led to our goal was over-hit, so I was in a state of shock when Kalou got his noggin on it.

A very tense game. Why do we do this to ourselves, eh? 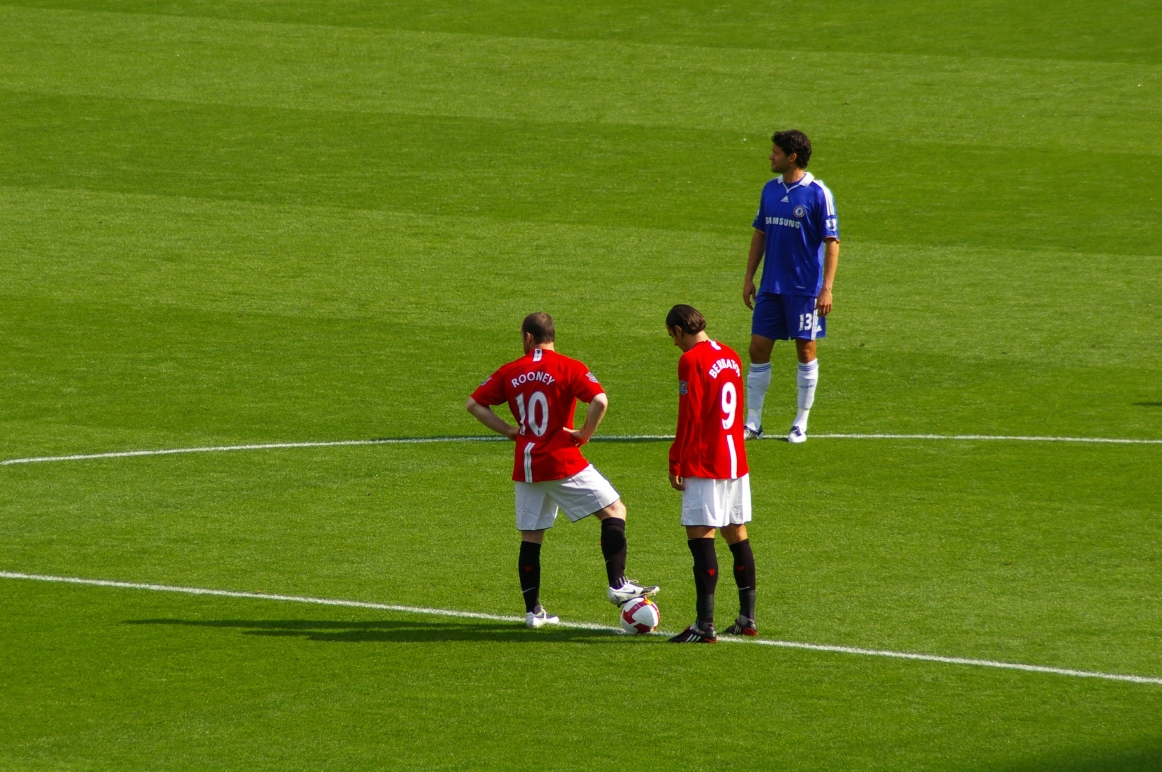