Glenn drove up to HQ for a change. Plenty of Chelsea-related chat with Glenn, Dave, PD and Terry from Radstock, whose normal lift was unavailable. I’ve known Tel for about twenty years and last saw him at passport control at Gatwick on the way to Moscow.

We were soon parked up on an overcast morning and were banging on the side door of The Goose at 11am. Bob from California joined us for the first pint of the day, plus an all day breakfast which went down well. I had to rush down to HQ, though, so I excused myself. I got to the area outside the hotel at 11.45am and met a few people…Chopper from New York ( with his daughter’s bloke Shawn ), Rory from Fort Lauderdale ( with three Londoners ) and Jeff from Orlando ( with his brother in law ). I pointed out that Peter Bonetti was in close proximity and so they all rushed over to get photographs and autographs. We had just missed Ron Harris, though. I picked up my Juve away ticket and bumped into Hoss, who was still reeling from the excitement of Wednesday’s game. I stopped to chat to Mark and Dave at the CFCUK stall and Dave wanted me to do an abridged version of my personal journey into Italian football so he could print it in the next fanzine. Cutting 3,500 words down to 1,000 will be a challenge.

Chopper, Shawn, Jeff ( flrr100 ), Mick and myself had quick pint in The Wellington, presuming Cathy would soon show up. However, Cathy was running late and would meet Chopper elsewhere. This was my first ever visit to The Wellington and it seemed fine. We are so well blessed for pubs and bars around Stamford Bridge, you know. Walking down the North End Road and up the Fulham Road alone, you could have a nice pub crawl from the Seven Stars, The Elm, The Oak, The Goose, The Arbiter, The Cock & Hen, The George, Belushi’s, Havana’s, The Malsters, Brogan’s, Bar 6, The Slug and The So Bar. There must be just as many in the King’s Road. We’re lucky – you go to places like Leeds and there are just a couple of pubs near the ground. I had a nice chat and it was good to meet Jeff for the first time – this was his first game at The Bridge in about fifteen years.

I excused myself and headed on back to The Goose for three more lagers. It was another busy one and there was the usual assortment of friends in our corner. I had left Bob my recently-completed photo album of the 2007-2008 season – it’s bloomin’ heavy and full of around 200 Chelsea photographs. I have been doing these for each season since about 1984-85, apart from the 1990 to 1993 period when I didn’t take my camera to every game. I think I would come out in a cold sweat should I forget my camera these days, though I do have a camera phone should that happen. I popped out into the crowded beer garden to have a few words with Dutch Mick. He told me that the Turkish airlines plane crash at Schipol on Wednesday had caused massive flight delays and so he decided to drive from his home in The Netherlands, through Belgium, to Calais and over on a ferry, not arriving to Chelsea until 6.30pm. A fine effort!

I was chatting with Bob and my mate Rob from Essex. For those of you who have not realised yet, we’re all into the gear at football even after all these years. Both Rob and myself were sporting Lacoste polos…for Bob, these past twelve months have been a personal voyage of discovery – and he was wearing a nice newly-acquired olive green CP shirt. Just don’t tell his wife how much it cost. Rob pointed out that there was a flier doing the rounds which was advertising a ( wait for it ) Chelsea versus Millwall golf day to be hosted by Ron Harris and Terry Hurlock. The mind boggles – forty Chelsea and Millwall loons playing golf…let’s hope that the clubs are only used for their intended purposes!

As usual, 2.30pm came around way too fast and it was time to make a move. I walked down past the street market on the North End Road with Bob and we said our “goodbyes” by the West Stand. I’ll see him in Seattle, hopefully, though neither of us has ruled out the chance of seeing each other in Rome in May. That’s beyond our control, though. Our destiny in the hands of others.

As predicted, Wigan’s away following was pitiful – about 300 maybe. They’re still intrinsically a small club. However, never mind that, they gave us a hell of a run-around in the first thirty minutes. We couldn’t seem to get in and amongst them. We were lucky not to be losing in fact. And I was lucky I saw our goal. I had presumed that Frank’s over-hit free-kick was off out for a goal-kick and so I made my way to the gents…I looked up and saw the ball was still “live” so stopped by Gate 10. The resultant corner was knocked out and JT marvellously scissor-kicked the ball back into the middle of the Wigan goal. The finish was a little similar to Poyet’s goal in 1999.

From then until Kapo scored a deserved equaliser for Wigan, we seemed to drift along with no real desire to increase our lead. Is our fitness really that bad? Very worrying. We all enjoyed the mad dribble down below us from The Captain. But, really, a lot of poor performances throughout. Yet another bloody hopeless show from Michael Ballack, always playing the easy ball, never dominating. When he broke though late on with a quick burst down the left wing, I thought it was Lampard and was totally gobsmacked to see the number 13 on his back.

We upped it in the last ten and although we should be grateful that we found that extra spirit to dig deep, isn’t that really frustrating? We should have killed the game off earlier. Steve Bruce was moaning about an alleged push on Mario, but Frank’s leap looked fine to me. The ball looped in and we went ballistic, but I soon settled my nerves to take about five shots of the boys celebrating down below us, fifteen yards away. With both Liverpool and Arsenal dropping points, we are looking good for a second place now. Wigan must hate us – they have given us nine tough games since they came up in 2005.

The atmosphere was generally quiet, but the MHL and MHU was stirred to life in the second-half when the PA asked the fans in the MHL to sit down…there was a barrage of booing and “stand up if you love Chelsea” and the place was bubbling along nicely for about five minutes. We ought to get the same bloke to do this every game! It goes without saying that the Liverpool result was met with roars too.

On the drive out of London, I texted a couple of Liverpool “fans “ ( ten games between the two of them ) and then fell asleep, as Glenn battled the traffic.

Not a great game at all, but another three points nonetheless. 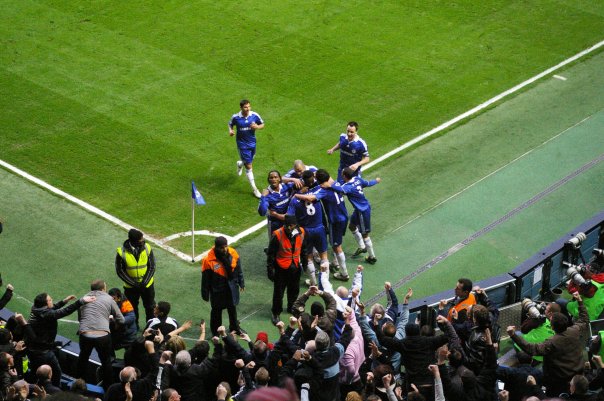