I live in a small village in rural Somerset, nestled in a valley to the east of The Mendip Hills. Like most of the UK, the village has been hit with a couple of heavy ( for us ) snowfalls the past week. On the local news on Friday, the weatherman advised “if you don’t have to travel on Saturday morning, please don’t.” Icy roads were to be expected.

So – a bit of a dilemma for me? No, of course not. Chelsea were at home and I was going.

I woke up at 6.45am and peeked outside. The snow was still thick on the front lawn and the fields, but the roads just looked icy with no fresh snow. I had to park the car on the road on Friday night because the driveway was too slippery, or rather, too steep. Got my things together ( wallet, camera, coat ) and defrosted the car. I didn’t like the look of the roads. I set off for Frome at 7.30am and tentatively edged my way down through the village, the road completely covered in a sheet of ice. Apart from a spell at college and a ten month stint in North America, I have lived all of my life in Mells ( claims to fame…the home of Little Jack Horner, the final resting place of WW2 poet Siegfried Sassoonand the home of TV presenter Kirsty Young)…as I crept past the village pub and church, which date from the fifteenth century, I thought back to my first ever game, March 1974…and here I was, doing the same trip, thirty-five years on.

Up Wadbury Hill, made it…nice one… and down through Great Elm. Here, I was faced with a real dilemna, whether or not to go straight on to Mutry and chance a dodgy hill, or head through a country lane which was probably less risky. I took option B and drove slowly over packed ice. I made it to Buckland Dinham, home of my maternal grandmother, and gave a little “woop” of congratulations to myself. From there, down through Lower Street, past the homes of my two aunts, and out onto the clear A361. I had made it. Phew.

I collected Glenn at 7.50am although the roads on his estate were pretty bad… then PD and Dave at 8am. Karen was missing this one and Tuna The Fishy Boy was using her ticket. To be honest, the road from Frome to Warminster was surprisingly bad. I felt my wheels slide as I made my way through Corsley. We noted that some skiers and snowboarders had been busy on the slopes of Cley Hill, just opposite the gate to the Longleat estate. To be honest, the fields were a picture. Once onto the Warminster by-pass, down the clear A36 and then past Stonehenge on the old 303, the roads were fine. They had been gritted and caused no problems. I relaxed and could now enjoy the drive.

Burger had been in touch. The clans were gathering. I stopped at Fleet for a coffee, but was parked-up at Chelsea by 10.30am. Three hours of driving and I breathed a deep sigh.

As always, our first port of call was The Yadana Café and their breakfast hit the spot. Glenn and myself walked down past the markets stalls on the North End Road and reached a sunny, yet cold, Stamford Bridge at 11.15am. Burger and Julie were spotted taking photos by the Chelsea mural. It was great to see them again – I have a feeling the last time our paths crossed was the debacle at Barnsley last season. They were visiting with Julie’s sister and her bloke. The ubiquitous Mr. Coden was there too. Trouble was – where was The Fishy Boy? Was he making his way inland from The Thames, flipping away madly? Where was he? He eventually emerged from The So Bar and we were all together for the first time since LA.

That sounds terribly jet-set doesn’t it?

We made a bee line for the hotel where I had hoped that Tuna and Burger could meet up with Mr Chelsea himself, Ron Harris. Thankfully, he was sat in a quiet booth with his brother Alan and Barry Bridges, both team mates from the ‘sixties. The legendary Mick was nearby too and Burger met him to discuss plans for Spain vs. England in Seville on Wednesday. Ron was his usual relaxed and charming self and posed for snaps. Luckily, Peter Bonetti soon arrived too and so more snaps. As Tuna stood with Peter Bonetti, both Burger and myself made a quip at the same time about “The Cat eating Tuna.” I could sense that they were both very happy to be able to meet these great Chelsea personalities. Job done and we headed off for a beer at The So Bar.

I was just about to suggest a team photo outside the megastore, when I heard someone shout “Chris” and of course it was Jordan, who was also in town. Good job he recognised me…he was in London with his girlfriend Christine and was looking forward to his first ever Chelsea match, although they had already been on the stadium tour. While the others headed for some beer, we went back to the hotel foyer. Unfortunately, Ron had disappeared, but Peter Bonetti was joined by top-scorer Bobby Tambling. Jordan and Christine were in luck and I was able to get them to pose for photos with Peter and Bobby. I also managed to mug Mick for a classy black and white photograph of Peter Bonetti so he could sign it for Jordan. I had a quick little chat with Bobby and his wife, who remembered me from the CPO event in November. A lovely time – the Chelsea Family, all together, smiling and laughing.

We dipped into The So Bar, which was stating to come to life. Had a little chat with Jon for the first time in a while. Things were a bit tight at his place of work and so I wished him well. Glenn was chatting with Tuna and I noted they were on the Guinness. Tuna, Glenn, Jordan, Christine and myself then walked back to The Goose, which was already heaving. In our little area, tucked next to the back section of the bar, there was over thirty people that I knew, all chatting away, drinking, partially-watching the City versus ‘Boro game on Sky. It was pretty manic and there was nowhere to move. Burger’s party soon joined us and the drinking continued apace…well, apart from me…of course I was driving. I explained to Jordan that The Goose was the cheapest boozer in SW6 by far. My home area was well represented, with eleven fans from Frome, Westbury, Trowbridge and Melksham…the others had travelled up by train. Wimps!

Parky was amongst the Trowbridge lot and we spoke about going to the Chelsea Old Boys game at nearby Swindon on Wednesday evening. Watch this space.

Jordan and Christine left early to make sure they could see the pre-match. They had seats in the Shed Lower. I went around to chat with Burgs and Julie, but there were conversations flying around everywhere. As is so often the case, the pre-match was the best part of the entire day.

Tuna and myself made our way to our seats in the Shed Upper and we bumped into CFC Cathy by the CFCUK stall. Perfect timing. Thank heavens, unlike the season opener versus Pompey, there were no queues at the turnstiles. We reached our seats just as the “Chelsea – Pride Of London” flag was wending its way along the Matthew Harding lower. It was a magnificent sight actually. We were pleased to see Ricardo Quaresma starting…but I am sure Glenn wasn’t. He was having trouble pronouncing his surname and I am sure I heard five different versions, ranging from Querro to Quasimodo during the day.

We began brightly and of course JT should have scored within the first few minutes. Quaresma looked lively, but we all found it bizarre he chose to cross using the outside of his boot on four separate occasions. The first-half was quite promising and I was enjoying being close to the action in the Shed Upper. It does afford great views. However, as the game progressed, I kept looking at the clock and couldn’t believe how quick the time was passing…a bit like the school holidays when the first two weeks are spent frittering away time and the rest is spent thinking how soon the end would be in sight. We frittered away too many chances in that first-half and later paid for it.

I phoned Andy so that Tuna could say a few words just as a “Zigger Zagger” began…this was probably the highlight of the entire game.

We were all dismayed that Q was taken off to be honest. He looked a threat. There was no change in tempo throughout the game. The midfield three didn’t dominate. Ballack drifted. Our defence, too, seemed to be disjointed and Hull so easily could have won it. Tuna was bellowing his disgust, but the atmosphere was again morgue-like. I felt for our guests from North America. At least Lovejoy stayed awake.

I am going to find it terribly difficult to remain buoyant and positive about this. I am neither a champion of Scolari but neither a great critic of him. At this moment in time, it is obvious that things are not right within the club. However, I sincerely hope that we do not become a “slash and burn” club, with hirings and firings taking place every year. Of course, I am not convinced that Scolari has the stomach nor the skill-set to manage Chelsea in this league. However, at the moment, I feel we need to give him the full season. I loathe the idea of managers being fired ( Ince and now Adams ) after four or five months. If he goes, who can we get to replace him? No, let’s work through this. Supporting Chelsea was never easy and these things are tough, but let’s stay with it. Again, I think the entire club’s support has been spoilt since 2003 and the spectre of Mourinho looms large. I personally think United will walk it this season. Is coming second a reason to sack the manager? I don’t know…I really don’t know.

Set off from London at 5.30pm and – thankfully – no more snow. Infact, the weather had been quite sunny and a lot of the ice on the roads close to home had turned to brown slush. My three passengers slept for most of the drive home. I listened to England capitulate to 51 all out in the West Indies and Liverpool edge a win at Pompey with two late late games. It was one of those days.

Eventually home at 8.30pm after six hours of tiring driving. I must be mad. 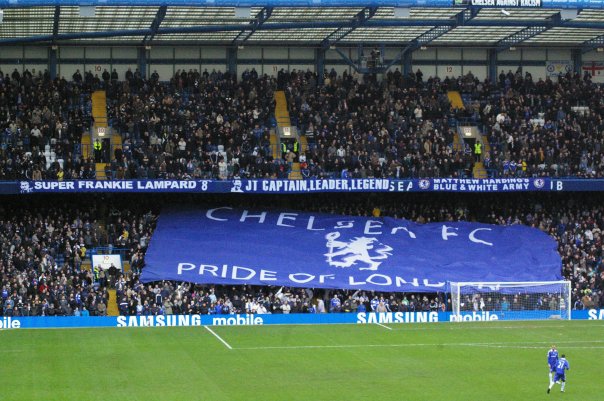