I picked up Glenn in Frome at midday – the autumn colours now prevalent – and it felt pretty weird leaving so late for a Chelsea home game. The kick-off, of course, was not until 5.30pm. It reminded me of Mourinho’s last league game in charge of us…another 5.30pm start, another game against Blackburn Rovers. Was it really two years ago? How time passes. We had a right old natter on the drive up to Chelsea. I have known Glenn since 1977 – his brother Paul was in the same class as me and he had “warned” me that his younger brother was Chelsea. Our friendship blossomed in that 1983-84 season and we have been the best of mates ever since. We looked back on some of the memorable times we have had over the years in our support of the team…we’re lucky people. There was a traffic accident heading over a minor road on Salisbury Plain, so I had to divert down the A36. We also encountered some heavy traffic on the M3.

I was in contact with two Texans on the drive east…Wes from Austin, who is over here at college in London until next September, and David, from Houston, who was en route to a work assignment in Africa, but had arranged to have a stopover so he could see Chelsea. That’s what I call good planning.

I parked-up at about 2.45pm and we headed for The Goose. Wes was already there, lager in hand. The place was pretty packed and I said a few “hiyas” to some mates as I edged out to the beer garden. I expected rain, but the weather was mild…just as well. On rainy days at The Goose, with no overflow into the beer garden available, the place gets rammed solid. Glenn, Wes and myself stood in a quiet corner and had a good old yap. David was running late, but arrived at about 4pm. He joined in the chat. David’s son Adam has a notorious claim to fame amongst CIA circles…it was his piece of celery, aimed towards Landon Donovan, which caused him to be ejected at half-time at the Chicago 2006 game. David and Adam lived in London from 2000 to 2003 and got addicted by the Chelsea bug. This was to be Wes’ third game at HQ. We spoke about the time he had arranged to meet up with Cathy for a game in Manchester City in 2007, only to spend a nervous hour in an incorrect pub in Moss Side, one of the most dangerous estates in Britain. It was in City territory and Wes had great difficulty in understanding the locals’ broad Mancunian accents.

“We can laugh about it now, but at the time it was terrible” as someone once said.

Wes, Davis, Glenn and myself had a fine time, chatting about all sorts of nonsense. There were a few other clusters of mates both in and outside the boozer, but we stayed to our little group…it was perfect really. I always like to spend a bit of time with any “new fans” and chat to them about what footy means to me. In a bigger group, with conversations firing away at all angles, this can become difficult. We were also joined by Mo, who Wes remembered from various US tours. Mo put my support to shame – she hasn’t missed a Chelsea game, home or away, since the Matthew Harding game in at Bolton in October 1996. Some record. As always, it was a shame for the pre-match to end. We also agreed to meet up after the game and head off for a meal and a few drinks. This meant I wouldn’t leave London until around 9.30pm. This allowed me enough recover time to go for three pints, even though I was driving.

At just a shade before 5pm, we set off down the North End Road and dipped into The Cock. My friend Daryl was there with his son Edward, now eighteen ( and now able to buy the beers! ). They had been to Kingston University during the day to look at Ed’s degree options. In fact, talking of college, Wes is studying for a masters’ degree at the same college that Daryl frequented from 1982 to 1985. Small world. On the march to the ground, we had heard that Spurs had lost at home. Lovely stuff.

Despite the predictable line at the gate, I got to my seats with a few moments to spare.

I surveyed the scene. Yet again there were sizeable gaps in the “comps” section of The Shed Upper, right behind the goal. That never ceases to amaze me. Blackburn’s away support was predictably small. I always used to attend most Chelsea vs. Blackburn games ( and vice-versa ) with a mate from Darwen, just a stone’s throw from Ewood. However, Mark would be foregoing the delights of watching his team play, instead choosing a Morrissey gig in Swindon in the evening. I remembered back in the mid-to-late nineties, Rovers were a real thorn in our side and it took us ages to defeat them at The Bridge. Alan commented on this – apart from Arsenal, no team had taken more Premiership points off us at HQ.

I had a quick scan through the programme and quickly noted the Tim Loveloy column. Not to be confused with my mate Lovejoy ( he of the perfectly constructed hair-style and tendency to fall asleep at games ), this Lovejoy used to host “Soccer AM” and now has a column in every home programme. He tends to love himself and I don’t class him as a particularly great Chelsea fan as I never see him at away games. However, his column was entitled “Football and fashion go hand in hand” and he went into detail about casualdom, illustrated by two photos from the ‘eighties. One line made me realise how much it all meant back in those days –

“We often sat there talking about the latest casual clothes rather than the football, like something out of the gossip pages of a girls’ magazine.”

Yep – I’ve been guilty of that. And Glenn. And Alan. And a few thousand more.

My clothes of choice for the Rovers game included a Henri Lloyd polo, Nike Cortez trainers and my new spanking CP Company jacket ( discarded, due to the mild weather. ) Oh, and a Royal British Legion poppy, pinned to my lapel for good measure. I had explained the significance of this to Wes in the boozer.

And so the game began. It was fantastic to see Little Joe back in the team and he almost headed us in front during the opening attack. The first twenty minutes was noticeable for Alan moaning about Anelka’s distribution. To be fair, it was poor. Then, a break down the left following a great Ballack pass and Anelka stroked a perfect cross into the danger area. We all thought Drogs scored, but it was an own goal.

You were saying, Al?

The first half was noticeable for pretty constant home pressure. I expected greater things from our support though, buoyed by extra pints surely…it was surprisingly quiet. Paul Robinson made a sublime save and our chances mounted up.

Paul Canoville was on the pitch with Neil at half-time. Top man. I bet he used to wear some gear back in the ‘eighties.

In that purple ( or should that be royal blue? ) period in the second-half, we scored four more goals and it was easily our best spell of the season. I was lucky enough to capture Essien’s curler and Frank’s penalty on film…plus the celebrations. I also snapped Ballack’s delivery which led to Drogba’s header. During this period of euphoria, The Shed did their biggest Bouncy yet…soon followed by the MHL. It didn’t take them too long to realise that one part of the ground was not so forthcoming.

A few West Stand Lower fans even joined in. Incredible. Actually, there was a moment early in the game, when a few souls in the West Upper began a song. This hardly ever happens.

Alan and myself were enjoying the goals, enjoying the laughter. We had already gone through our usual repertoire of gags ( too personal and, of course, too corny to repeat here ) and I commented that we really needed a variation to our standard –

“Come On My Little Diamonds.”

Alan came up with “Come On My Little Diamond Formation.” I’m not sure if I laughed or groaned.

By the way, the highhlight of the whole game ( if not the season! ) was Joe’s sublime “reverse” cross, with the right foot coming from behind his standing foot. How we have missed his genius and his ability to Take The Mick!

Glenn, David, Wes and myself met up outside “The Butcher’s Hook” ( rhyming slang for “look” in case anyone is wondering ) and we set off in the crisp autumn air. We marched past a few T-shirt sellers and a couple of pubs and soon found our way up to Salvo’s for Peronis and pizza. The Inter vs. Catania game was on the box and Mourinho’s brooding presence glowered over us. Yet more chat about various football topics ( The 39th. Game, AFC Wimbledon, Rangers at Liverpool vs. Chelsea in 1985, the 2010 World Cup, Mourinho…) and the inevitable toast to “Friendship And Football.”

It had been a perfect day. We left London at 9.45pm and headed home. However, I heard worrying news from three different friends who were at the Morrissey gig in Swindon. Had it not been for the 5.30pm start, I too would have see Mozzer collapse after a rousing “This Charming Man.” Well, if my mate Mark was not miserable after his team had lost 5-0, heaven knows he certainly was now.

I dropped Glenn off at his house bang on midnight.

“Top of the league mate.” 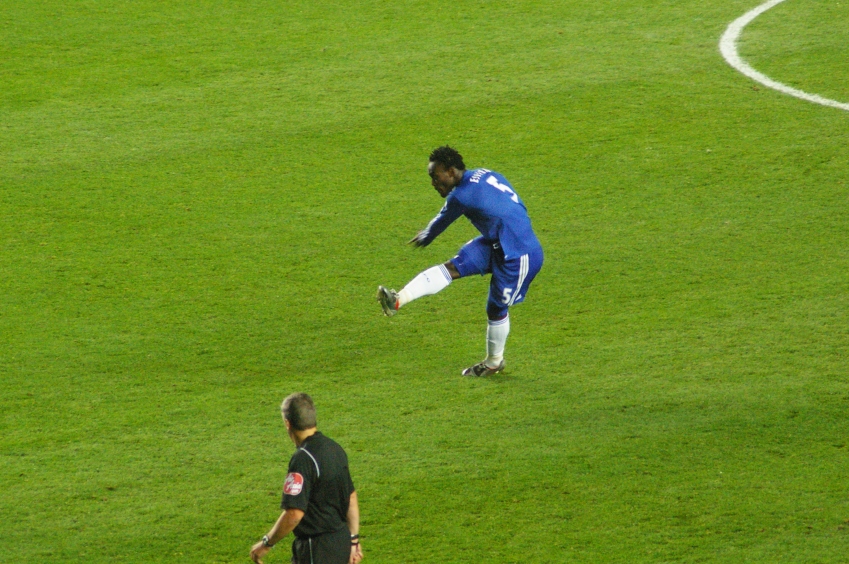