As a pre-curser to the United game on Sunday, I watched Paulton Rovers play Norwich City in the FA Cup on TV on Saturday lunchtime. Paulton is a village about eight miles away and they play in the same division as Frome Town. In fact, I watched Frome defeat Paulton in the Somerset Senior Cup back in the spring – the day after we lost to Barcelona in the CL semi-final. Two more contrasting games you could not wish to find. But that’s the joy of football, eh? An extra element of interest was that my next door neighbours’ grandson Ben Lacey was the young star of the Paulton team. Unfortunately, Norwich romped to a 7-0 win and Paulton’s five minutes of fame was over.

On the Sunday, I collected Parky at 10.30am and drove up to London via the A4 and then the M4. As this was Remembrance Sunday, we were both wearing poppies as a mark of respect. As a child, I used to love watching the Remembrance Service in London on TV. The Cenotaph was designed by Lutyens and the plain marble war memorial and a few other statues and plinths in my Somerset village were designed by him too. I remember that on one occasion, the BBC also showed film of a service from the large obelisk on the Marlborough Downs, near to where my father did his training at RAF Yatesbury in around 1941. As I drove between Devizes and Marlborough, I spotted the large monument and we had a chat about Remembrance Day. We knew that the Chelsea Pensioners would be involved in the ceremony at The Bridge and I knew it would be a sombre and understated affair.

Something the British do well. I remember being in downtown Las Vegas ( admittedly not the most typical of American cities ) in November 1989 and watching aghast at the Veterans’ Day Parade, awash with smiles and dancing girls. It left an impression on me and I longed for the quiet reverence of the Royal Albert Hall and The Cenotaph.

A few of us have a joint Chelsea / Poppy badge which we wear around this time of the year and I think the contrast of the blue badge with the red poppy is just right. We also heard that the Chelsea team would be wearing special shirts with embroidered poppies.

We arrived at The Goose at around 1.30pm and the pub wasn’t too busy at the start. I had brought up some photographs from Madrid to show the lads and we had a good chuckle recollecting a few of the funnier moments. I had heard that Tuna was over for a week or so – sadly, his mother hasn’t been too well – and he had miraculously sourced a match ticket. We found out that our respective mothers will be celebrating their eightieth birthdays within five days of each other in January. Weird, eh? He trotted off at around 3.15pm in order to collect his ticket from a bloke in “The Cock And Hen.”

Over the years, we have tended to do well in Manchester and United have had the advantage in SW6. However, the last seven games at The Bridge resulted in four Chelsea wins and three draws.

I noted to Alan that the all of the usual Chelsea banners which usually adorn the balconies had been turned back to front so that they were plain blue. I think this was so that the focus would just be on one white banner, draped at centre-stage at The Shed. It simply said –

“Chelsea Supporters – Will Remember Them” with club crests and a poppy.

Just before kick-off, the teams entered the pitch and gave a guard of honour to some active servicemen and seven Chelsea pensioners. Even though their tunics are red, I love that contrast too. I personally think we should go back to our pre-Ted Drake nickname of “The Pensioners.”

For vast parts, United ran the show, especially in the first-half. No question. Ferguson played just Rooney up front with a band of five in the middle. United were all over us like a rash and they closed us down at will. Pre-match, I had predicted that our midfield would be too strong for United, but I had to eat my words.

There was a lovely piece of football in the first-half involving Wayne Rooney and John Terry. Rooney ran at JT, teasingly keeping the ball on his toes and JT was back-peddling but was able to push him out wide and eventually forced Rooney to play it back to a waiting midfielder. It was pure theatre – one versus one – and I loved it.

Only Anelka – love the way he keeps possession – and Riccy – reading the game well and bursting forth at will – were above average in the first-half. I thought Frank was as poor as he had been for a while. Not one tackle and not one telling pass. Deco was below par, too. We improved in the last ten minutes of the first-period and we expected a big shake-up at half-time.

I spotted a large Canada flag in the East Stand, just above where the Chelsea Pensioners always watch every game. Chelsea gives the Royal Hospital free tickets and this is a tradition which goes back years and years. We can be rightly proud of this.

There was the usual red/ white / black United flags in their section including one lampooning our captain.

Oh dear – memories of that night came back. To be fair, the United fans did make a constant din throughout the game, including their noisy “Viva John Terry” chant.

We were awarded a free-kick right down below me after a rash challenge by Fletcher. Frank had been his usual frustrating self with dead-balls all day. I steadied my camera and pointed it towards the phalanx of players in the box. Frank floated on in and I snapped just after JT connected.

Oh you beauty – Get in! I screamed. You probably heard me.

It brought back memories of the same combination – Frank corner, JT header – which had resulted in the winner in the 4-2 game versus Barca in 2005. JT was euphoric and raced towards Frank and I followed up with a few more snaps, but the large CFC flag tended to get in the way.

We were all convinced that United would equalise – especially when the ball zipped across the box on more than one occasion.

I watched the referee as he blew up and the noise echoed around The Bridge. We had certainly rode our luck – make no mistakes about it. I think United deserved a point. Still, the game had swung our way and we had held on.

The fact that it had been a sub-par performance from us stayed with me, though.

As I walked back to the car, it seemed as though everyone was celebrating wildly apart from me. Maybe, after all those United games, I am getting game-weary, too many big games…too many wins against Manchester United? This haunted me on the way home…maybe I need to re-fuel my batteries…

So – it’s good we have a fortnight, now, to recharge those batteries and to enjoy “Life At The Top.”

Five points clear – sit back and enjoy the view! 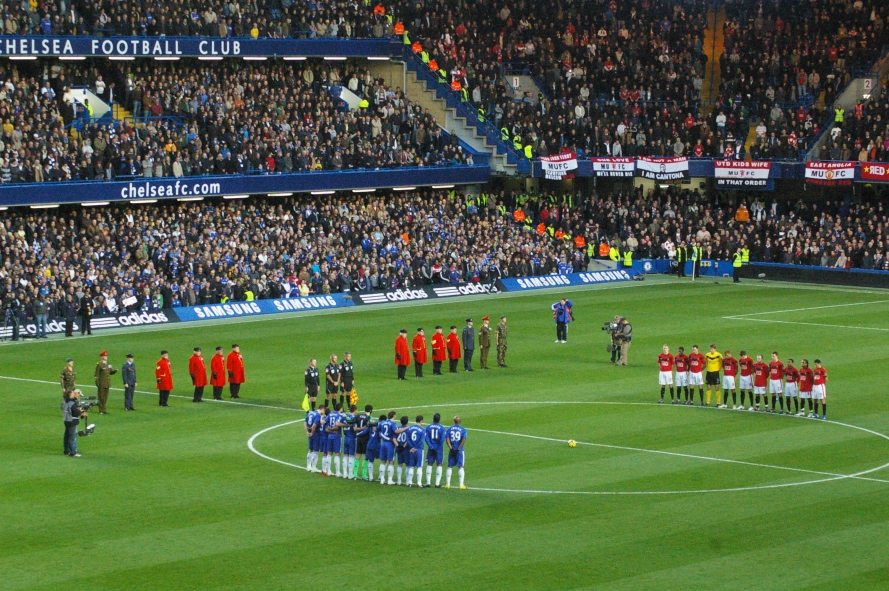