From Stamford Bridge to Wembley…

I had been looking forward to this FA Cup game throughout the holiday season because it coincided with my mother’s eightieth birthday. After looking at some options, I booked the two of us into the Copthorne Hotel at The Bridge on the Saturday afternoon, ahead of the game on the Sunday. I was a bit concerned about the cold weather, but Mum was really looking forward to it. We began with an Italian meal at West Brompton on Saturday evening and Mum was clearly enjoying her time in London.

However, at 2.30am on Sunday morning, we had a major scare!

Our sleep was rudely interrupted by the wailing of a fire-alarm at the hotel and for a few scary moments, I wondered what would befall us. I put on some clothes and did my best Corporal Jones “don’t panic, don’t panic” impersonation…I peeped out into the hallway and noted a few indifferent Italians giving loads of hand gestures…I hoped and prayed that it was a false alarm. Thank heavens it was. Phew.

However, I was unable to get back to sleep for ages and for some reason all I could think about was Jamie’s question about our team of the decade…in the small hours, I toyed with a few ideas…the troublesome right-back berth, could I really leave out Duff and Robben ( only two good seasons apiece? ), I had to find a place for Eidur, Jimmy and Drogba upfront ( blimey – I don’t think they’d get on! ), I couldn’t put Dan Petrescu in as he only played five months into 2000…decisions, decisions. We were over-stacked at left-back with Le Saux, Bridge and Ashley, but oh that right-back place…

So, a right old mixture of names, eras and formations. With that sorted, I fell asleep.

The match day morning began lazily – we were in no rush. I peered out of our hotel room down at the old Shed wall, the winter sun lighting up the South London horizon beyond. A few fans were already clutching Megastore bags.

With the cold weather showing no signs of letting up, we sat in the hotel foyer / bar area from 11am to 2.15pm. It was a lovely time. The place gradually filled-up with Chelsea fans. My two mates Glenn and Parky arrived at about 11.30am and we sat in a cosy corner with Ron Harris and Peter Bonetti, chatting about all sorts. Peter was there with his daughter and grand-son. We spoke about our shoddy form of late, but we didn’t let it spoil our time. Autograph King Mick showed up too and I was able to chat to him for a bit. A couple of pints, a coffee for Mum…nice. At 1.20pm, we heard a yelp from a gaggle of people watching the Manchester United vs. Leeds United game on the bar TV…Leeds were 1-0 up. Lovely stuff. Nobody at Chelsea likes Leeds, but we put our dislike of them to one side for one day only. I thought of those 9,000 Leeds fans going doo-lally.

I had briefly popped into the megastore on the Saturday, but only bought one item. I flicked through a Stamford Bridge Tour Brochure and was chuffed to see a full page photo of some US-based CFC fans at the Milan game at Giants Stadium in 2005.

I went to the Frome Town versus Paulton Rovers game on New Years Day and I chatted to Glenn about it…it was a dire game, no goals, freezing cold, but a bumper crowd of over 600 showed up. Good times at Frome Town, up to fifth place now. The first ever “professional” game I saw was a Frome home game in around 1972 and I went with my mother…my Dad was working in his shop and so was unable to attend. I remember nothing of the game apart from a heavy Frome defeat and Mum buying me some cherries to eat at half-time.

Of course, Mum has been to Chelsea many times before and I guess she has been to The Bridge around twenty-five times…mainly in the 1974 to 1979 period, when Dad would drive us up from Somerset twice per season. Mum also went to games at the two Bristol clubs – and Swindon. The last game Mum saw at Chelsea was the Birmingham match in 2005, our centenary championship!

We left the hotel, coats buttoned, scarves on. We battled against the crowd. The 6,000 away fans were out in force. The weather was brutal, but Mum wasn’t complaining. There was the usual ten minute wait to get inside the MHU. Leeds had hung on to the lead at Old Trafford. Great stuff. We managed to take the lift up to the top tier. Mum is in good health, but six flights of stairs is too much ( sometimes for me! ).

Once inside the stadium, it didn’t seem so cold. A full Shed End of away fans, but only three paltry flags. They didn’t make much noise. No balloons!

The big surprise that Anelka wasn’t playing and I wasn’t sure of the formation…was it not a “Christmas Tree” ( with Malouda and Joe behind Sturridge )? To be honest, after three early goals, I was far from caring…whatever formation it was, it was definitely working. What attacking options down the left with Ashley and Zhirkov and Malouda! I was very pleased that Sturridge scored his first goal for us, but the other two were scrappy. Not to worry – coasting. I think I counted just two Watford shots in the entire first-half.

At half-time, more congratulatory handshakes and kisses for my mother. Anna brought us some coffees and Russ gave some mince pies. It was a lovely feeling for Mum to meet my match day mates.

Loads more Chelsea pressure in the second period and what a strike from Frank – especially for Mum! I was really impressed with the cool finish from Sturridge for his second goal…very nice. We all thought it a shame that Carlo took the lad off when he was “on” for hat-trick.

The Chelsea support was quiet and were only really roused after each goal.

I was so pleased when I glimpsed Mum singing along to “Chelsea, Chelsea” to the tune of “Amazing Grace.” How sweet the sound. She could teach a few JCLs a lesson or two!

Carlo made a few substitutions but it stayed at five. I shan’t make any further comments about our performance because – after all – it was only Watford. I was impressed with Sturridge and Zhirkov. JT seemed intent on going on more mazy runs in the attacking third. Maybe he’s a frustrated striker. I’m convinced that one day he’ll score a goal of the season contender from forty yards. Towards the end, our former left-back Jon Harley ( he of the scuttling runs ) came on as a Watford substitute and was given one of the noisiest songs of the game. That was a nice touch. The “referee has added on a further five minutes” announcement was met with frost-bitten groans.

We walked back to the car, stopping off for a good old-fashioned plate of pie and chips and a mug of tea on the North End Road. We eventually thawed out. On the drive back home to Somerset, we listened to the FA Cup draw and I was elated that we face an away jaunt to Preston. At last a new stadium to visit ( well, actually a very old stadium, but a first-time visit for me. )

Later in the evening I opened a couple of my books on football stadia and “read up” on the history of Deepdale. The National Football Museum was once based there, but I heard recently it was going to be moved to “more fashionable” Manchester. I hoped it will be open – and still in Preston – for our visit later this month.

From Stamford Bridge to Deepdale…to be continued. 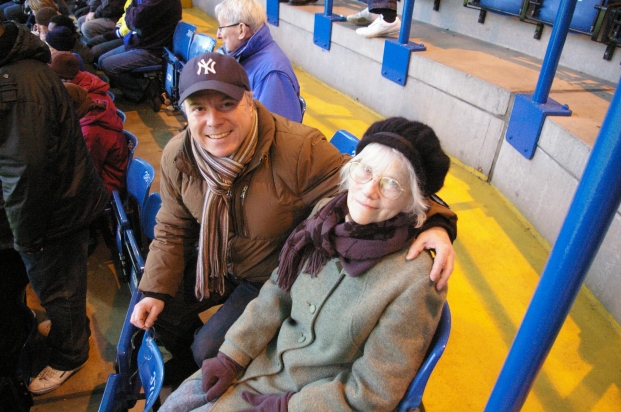