It feels great to be back at the top of the league once again – with a few laughs along the way, too.

This turned out to be a long day spent at HQ. I collected Parky at 8am and met up with a few others in the café at 10am. Bob from San Francisco had been in town since Thursday and had gone to the “Star On A Stool” event with Petr Cech, Daniel Sturridge and Paolo Ferreira that night. After a bacon sandwich apiece, we joined up with the boys in The Goose beer garden. This was another rushed pre-match and I only had time for a few pints.

The talk in the beer garden was off European trips in the autumn. Six of us have booked flights and two nights’ accommodation in Madrid for only £130. That’s a great price. I visited Madrid – for just one day – in 1987 and so can’t wait to back and see it again. A few of the lads are doing all three group stage games. We were like kids at Christmas time on the Thursday and I received around thirty emails during the day, talking about possible trips and it was so funny. The buzz grew with each new email. This was even before the draw took place! A few of us said that the day of the CL Group Phase draw is one of the most exciting days of the season.

Rob even said he gets more excited about the draw than some games these days and I, for one, knew exactly what he meant.

Porto and Atletico were easy places to book, but Cyprus was proving to be more difficult. Parky chimed in with the comment that one of his mates works at RAF Lyneham and he wondered if he could get the RAF to take a few paying guests over to Cyprus in a Hurricane troop carrier.

Parky was serious. I had visions of Rob, Gary and Alan getting parachuted in!

Unlike Hull City, we left in good time. I needed to call in at “the stall” to pick up a Kerry Dixon-signed copy of Mark Worrall’s new book “Chelsea Here Chelsea There.” I got to know Mark Worrall over the last year because I had learned that a mutual friend had been gravely ill – thankfully fully recovered. One thing led to another and I heard that he was bringing out a book to mark the silver anniversary of our iconic game at Highbury in 1984. He asked me to contribute and so I penned a three-thousand word piece, along with around fifteen other fans. Bob bought a copy – his was signed by Kerry Dixon, too. We made our way into the ground, my head full of Europe, the book and God knows what else.

One sight made me jolt. As I queued up for a couple of programmes, I saw a young lad in a claret and blue shirt and it was only when I saw “BFC” sewn into the back, I remembered that we were playing Burnley. I had simply not thought about the game nor our opponents in the pub. I was simply, as the song goes, there for the Chelsea. It made me laugh.

I was inside the stadium with plenty of time to spare, unlike for the home-opener. This would be a special day for me. This would be my 500th game at Stamford Bridge, going all of the way back to 1974. Glenn asked me what I could remember about my first game and I was full of memories but mentioned that we had Topic chocolate bars at half-time and that “I would never have imagined I would have reached five hundred.”

As the last few minutes ticked away, Alan and myself noticed some “European style” streamers being held from the MHU balcony wall. There were three together at either end and they formed the framework for the Chelsea – Pride Of London flag as it was passed along. I think the display needs more work ( more streamers for a start ) but at least the effort wasn’t lost on me. Further updates to follow as the season progresses.

The game began and it was a thoroughly entertaining first-half. Nikolas Anelka spurned an easy chance as he took one touch too many. Then, Frank uncharacteristically gave the ball away and the industrious Paterson shot wide after a great square pass. Had he struck the target, I am sure Cech would have been beaten. At the other end, we forced “The Beast” Jensen into making a range of excellent saves. I was surprised that Burnley only brought around 1,000 fans, especially since they brought 6,000 last season in the League Cup. However, Burnley is a really small town of only around 60,000 and so I suppose 1,000 isn’t too bad. The £50 tickets were another valid reason, as Alan pointed out.

This was a wide open game, though Chelsea were dominating the play – and chances. Our midfield was passing the ball around with glee and I remember thinking that at last we have round pegs in round holes in that all-important diamond. Deco was full of guile and touch, probing away. Essien gave so much more than Mikel in the withdrawn role, driving on in the way that only he can do. I noted that Frank Lampard and Herr Ballack kept changing flank and were very dominant. Our first goal came when Ballack pressurised a Burnley player into losing possession, Essien picked up the loose ball and set Drogba away with a perfect pass. Drogba cut the ball back for his strike partner Anelka to prod the ball home.

Yep – Drogba to Anelka again. More of the same please.

Half-time came and I showed a few close friends the new book. In addition to the 3,000 words in the book, there are also two photos…one of me at Chelsea in 1984 and one with my favourite ever player Pat Nevin in Moscow last year. There were a few shrieks of laughter at the 1984 one. Well, as if my some magical quirk of fate, who should be on the pitch with Neil at half-time but none other than Pat Nevin. Glenn, who travelled up with me to all those 1983-84 games, recognised the significance of Pat being on the pitch at my 500th game and I smiled in acknowledgement.

It was a perfect moment.

I read the programme during the rest of the break and was pleased to see an article on another of my favourite players from childhood – another number seven, Ian Britton. He played for us from 1972 to 1982, but also played for Burnley for three years. He even scored one of the most important goals in Burnley’s history in 1987, when his goal made it 2-0 in a game that Burnley had to win to avoid relegation from the Football League. He remains one hero I am yet to meet. I wonder if Beth can pull a few tricks at the CPO this November!

We continued to purr in the second-half and were rewarded with two lovely goals from Ballack and Ashley. During the build up to the third goal, Frank burst from midfield in a way that he simply would not be able to do had he been at the top of the diamond.

This was great stuff indeed and we could have scored six, maybe more.

We had twenty-five shots and Burnley had three. Men against boys. If I had to chose our best player, I would say that nobody played better than Deco.

After the game, I met up with San Francisco Bob ( unagi1 ) and we stopped off at The Finborough for a couple of pints of Becks Vier. He had watched a game from the MHL for the first time. We had a lovely chat about Chelsea and our respective home towns. The immediate post-game crowd drifted away until there were just the two of us, chattering away about Baltimore, Madrid and various other football cities. It’s a great life. We dropped in for a pizza and some Nastro Azzurro at Salvo’s, but the owner was in Italy. We watched, half-heartedly, the United vs. Arsenal game.

We then back-tracked and caught a cab down to The Imperial on the Kings’ Road, the former watering hole of Matthew Harding and The King. Rob had been there since 2.30pm and it was now 7.30pm. The drinking continued and we chatted with a few of the stragglers who were showing no signs of wanting to go home.

Sambucas were ordered and the night continued. I bumped into Mark’s mate Olly, who I had briefly met in Texas. Small world. He told me he had started the Chelsea Hairhunters group on Facebook and it made me chuckle. Two members of The Youth were there too. We left The Imperial at about 11pm and, via a quick chat with Digger at The Morrison, Rob, Bob and myself ended-up back at The Goose, the full circle completed.

We stayed on past midnight – more lagers, more sambucas, some amoretto for Rob.

“Amoretto – Chelsea Amoretto” we sung continuously. We were invited to stay behind for a “lock-in” and Reg started pouring out some free drinks. He poured Rob and me a lethal cocktail and I knew the end was in sight. We departed at about 2am and I crashed – literally – in Bob’s hotel room, while Rob headed down to the Broadway for a night bus.

It had been a top day in London Town.

I was awoken by a text message from Rob at 8am. He was now back home, but had woken up at Hammersmith Hospital at around 3am. He had suffered a cut on the head and wanted to know what on earth had happened. I phoned him and we tried to piece it all together. I guess he had fallen – after all, he had been drinking for 16 hours!

The final shame, though, was this…in an attempt to check him out, the nurses had cut away his Lacoste polo and he had to travel home on the night bus wearing a hospital charity shirt. 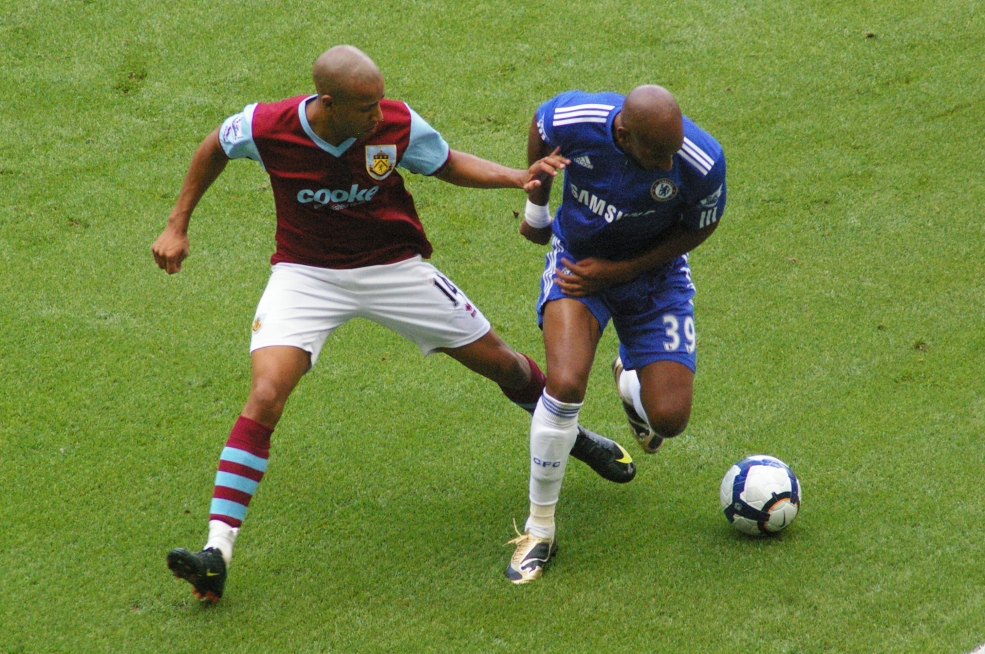