This was to be a monumental night in deepest SW6 for one CIA regular – Jules ( ChelseaChickSoCal ) is over for a week or two and is staying with her brother Steve in Cheltenham. The game against Olimpique Marseille would be their first game at Stamford Bridge. Additionally, Jules had arranged for John ( who also posts on CIA ) and his brother George to meet us in The Goose and this, too, would be their debut at HQ. We had arranged for Jules and Steve to drive the hour or so to Chippenham and then travel up with His Lordship and yours truly.

Luckily I had arranged to negotiate an earlier-than-usual “escape time” from work, so there was no stressful scurry up to London. The timings were perfect and we left bang on 3.30pm. Lord Parky had been drinking across the road at The Pheasant from 2.30pm and was already four pints to the good…or bad…for those who know Parky, take your pick.

I made good time amidst the M4 traffic as we chatted about all things Chelsea. I remember reading Jules’ first few posts on CIA and her story is pretty amazing…via a conversation with dear Vic on a stadium tour, she was put in the direction of Andy’s OC Hooligans and Jules hasn’t looked back. Stories of football, Chelsea, fandom and England were swapped between the four of us and it was a perfect pre-curser to the night’s game.

I posed the question to Jules –

“Which three football stadia can be seen from the M4?”

At 5.30pm, we had reached The Goose and the first pints were soon ordered. A few of my mates were already there, soon to be augmented by others as the evening progressed. The Spartak vs. Zilina game was on TV – unfortunately, as I looked at all those empty bright yellow seats at the Luhzniki in Moscow, all I could think of was a certain game in 2008. As Alan said, it looked like the rain hadn’t stopped since.

John, who I briefly met in Baltimore, arrived at about 6.15pm after battling his way through the pub regulars. I reintroduced myself by saying –

“Yeah, photographic evidence would suggest that I was in Baltimore, but I’m really not convinced.”

For anyone who survived Baltimore, you’ll know what I mean.

John had kindly collected the tickets for the four of them at the box office. Within a few moments of arriving in our little corner, tucked under the TV screen, the historic handing over of Jules’ first ticket took place. Jules was beaming as she grabbed the ticket and uttered one word.

There was much laughter from us both. You can take the girl out of California…

John and George had been staying down in Winchester and had been doing the tourist trail, including visits to Salisbury and Portsmouth. It’s a nice part of the world. John was trying to talk George into extending their visit an extra week past their planned Monday departure. I immediately made the comment that there was no Chelsea games next week, so why would anyone want to hang around? I was only half-joking.

“Get yourselves home and start saving money for the next Chelsea trip!”

At just after 7pm, Jules, Steve and myself set off down the North End Road, leaving Parky, John and George guzzling with a few of the lads in the boozer. It had been a fine pre-match. I pointed out all of the pubs on the walk down to the stadium – one day we’ll do them all on the best pub-crawl of all time. I took a photo of Jules and Steve outside The So Bar, then headed off inside. I left them with two instructions –

The CL match programmes this year are slightly different…white and not blue, with a spine, like the monthly magazines. The content is the same as the normal ones, though. Same price, too. That’s unlike Chelsea. I’ll talk to Roman about that.

Another midweek game, another full house.

As I settled in my seat, I spotted the four US visitors in row two of the Shed Upper, right behind the Peter Osgood “Born Is The King” banner. Dead central. I had mentioned to them that not only did I want the team to perform, I also ( probably more importantly ) wanted the Chelsea fans to perform too. I wanted them to be buzzing with the noise. For me, that’s what Chelsea is about…the team may not always be title-challengers or cup-winners, but there’s no reason why Chelsea fans can’t make the ground shake.

There were a few empty seats towards the rear section, but the c.3,000 Marseille fans stood the entire game and were in rollicking good form. The balcony was festooned with various banners – one Ultra flag was the largest, but I noted two strange ones, heralding two of the club’s fan groups.

At the front of the lower tier – “DODGER’S”

I had to text a few choice individuals in California with the news that two of baseball’s teams had been spotted in deepest London.

“Who are these people?”

It was baseball’s biggest intrusion into SW6 since the New York Giants and the Chicago White Sox played an exhibition game at Stamford Bridge in the ‘twenties.

The game began and there were no complaints from me with our early form. Of course, this was an injury-weakened team, with several first-teamers missing through injury and suspension. Kakuta was given a start again and I hoped he would shine. The Marseille fans wasted no time in hurling tons of abuse at the former PSG striker Anelka and it instantly reminded me of the night in 2004 when 40,000 PSG fans made life very unpleasant for Didier Drogba, as the former Marseille player returned to the Parc Des Princes. Of all the rivalries in France, the PSG / OM one is the most bitter.

Yet another early goal – JT toe-poking in a corner – but I annoyingly missed it as I was mid-text. Ironically, Alan alongside me missed it due to the same reason. We’ve been varying it a bit recently and our “THTCAUN” and “COMLD” contained a horrid mixture of French and English words on this particular occasion. ( Against Newcastle, our two trademark phrases were said with a Geordie twang. ) Anyway, my French teacher from school days would not have been happy…

The away fans were making a hell of a racket – pointing, chanting, swaying – and were at their noisiest just before we were awarded a penalty. We didn’t get a good glimpse of the handball which lead to the penalty, but I steadied my camera as Anelka – with the OM fans baying – took the smallest of run-ups and scored again via another impudent finish. Two goals right in front of Jules, Steve, John and George – lovely stuff.

We played the ball around nicely for the rest of the first period, with Mikel and Essien dominating the midfield nicely. Not much from Kakuta, though. We missed Frank’s forward runs on a few occasions, especially when the ball dropped loose on the edge of the box a few times.

At half-time, who else but Didier Drogba appeared to a great reception from home and away fans alike…the Marseille fans sang their “tra, la, la, la, las” and everyone was happy.

What happened in the second period, eh?

Marseille began strongly and kept going…probing away, moving the ball nicely. Over the course of that second forty-five minutes, we found it difficult to put two passes together. Ironically, though, although Marseille out-shot us, we had the best two chances. On 66 minutes, we were chanting again for Alex to take a free-kick and the resultant whiz-banger crashed against the post. Then, a lovely pass from substitute Ramires found Essien who blasted against the same post. Despite only glimpses of fluid play, we could have won the game 4-0. Despite Marseille’s dominance, all of their ensuing shots seemed to be down Petr Cech’s throat.

Our support seemed to be both frustrated, yet quiet. Where was the passion of last week’s throaty performance against Newcastle when we were 3-1 down and the crowd responded magnificently? I was feeling for our four Bridge Virgins in row two. The Shed Singing Section were quiet for most of the game and the MH too. The Marseille support had one more trick up their sleeves, though. With just a few minutes left, everyone turned around with their backs to the game, linked arms and starting bouncing. It was quite a spectacle, believe me. I had never seen that before I must say.

An Essien chance – the last one – whizzed past the goal and the game petered out.

Everyone reassembled back at the car and, despite typical road works on the M4 ( welcome to England! ), I made good time on the return journey. We stopped for a Scooby Snack at Reading Services – yes, a can of Red Bull for me – and with Parky sleeping in the front, dialogue was minimal on the way home. We had won, of course, but our second-half performance wasn’t great. Steve was philosophical though – the defence was strong – and it goes without saying that Jules had enjoyed herself…no question!

And on Sunday, we’ll do it all again. 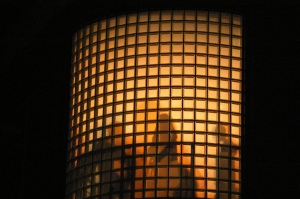