What an amazing week. I don’t mind admitting it, I was quite deflated on the drive home from Blackburn last Sunday. In my mind, the two upcoming games with a spirited Portsmouth and a resilient Aston Villa would represent a tough challenge for us.

Little did I know.

The pre-match was as per usual…Lord Parky, Folsom Steve and the usual suspects enjoying pints and chat in The Goose. However, on this occasion, we were joined by another Northern Californian visitor, San Francisco Starla, who flew in for the Villa game on Thursday. It was great to see her again. She joined in the pre-match banter as we giggled away like fools. We took a few photographs outside the stadium – a Starla Rose between two thorns – and Steve led her away to pick up her match ticket, albeit for the silent wilderness of the West Lower.

Into the stadium and Alan told me that Didier was on the bench…not quite sure what I made of that. I noted a huge area of around 750 empty seats in the Shed Upper, in the Villa section. I would imagine that the “Villa faithful” ( ha! ) had decided against coming down for two Chelsea games in a fortnight. I was far from impressed. The sad thing of course is that no CFC fans could use those empty seats due to segregation.

In the match programme, I spotted some CFC / Emporio Armani charity T-shirts on sale for £20. I would surely buy one. To avoid it would be akin to King Canute trying to stop the tide.

The game began in nice sunshine, but with clouds present too.

In the first-half, there were predictable grumbles of discontent when Chelsea appeared to be unable to unlock the Villa defence. I noted that with Deco, Joe and Malouda playing, we would be OK for creativity, but the play was over-elaborate…pass, pass, pass…and we noted that the attacking six were often ball-watching ( a cardinal sin in my book ) and unable to free themselves into space.

However, Malouda worked some space well and rifled in a low ball into the danger area. Frank was on hand to toe-poke it goalwards and we breathed a sigh of relief. Villa’s attacks were quite rare, but we didn’t close Young down and his cross was tucked in by Carew, who did appear to be in an off-side position.

More of the same for the rest of the half…Chelsea pressure, Villa resilience. That man Malouda then played Zhirkov in…a trip and the referee pointed to the spot. From 100 yards away, it appeared to be a dodgy penalty. Not to worry, we’ll take it.

I steadied my camera and Frank slammed it high past Friedel. I snapped his high leap and spin of celebration, down in the SW corner…Parkyland.

At half-time, the grumbles ceased.

We noted Arsenal were being held 0-0 in the Second City.

Deco had enjoyed a few nice touches in the first-half and the crowd continued to warm to him after the break. He started a nice flowing move through the midfield, then pinged a sublime through ball through to Zhirkov…I was in line with its trajectory and it really was a perfect ball…heavenly. The ball was played in to Malouda and he stroked the ball in. The crowd erupted…3-1.

Didier had been warming up on the far touchline and Malouda ran over to celebrate with him. It was heart-warming to see their little victory jig. Meanwhile, the sky turned darker…

However, Chelsea provided a great antidote for the grey skies and another “give and go” involving our Russian left-back resulted in another poor Villa challenge inside the box. The referee pointed to the spot again and we held our breath. My camera was at the ready as Frank approached the ball.

Frank lept to the air once more, fingers pointing heavenwards…how many photos of this personal celebration do I have? Special memories. The PA quickly announced that Frank Lampard had now scored 150 Chelsea goals and The Bridge roared in adulation. Some achievement.

The Chelsea choir wound up the Villa contingent with a pre-semi final rendition of “Che Sera Sera.” Aston Villa had a few half-chances, but were repelled by our defensive line. One resounding tackle, perfectly timed, by The Captain was met by thunderous applause.

More goals followed. Frank selflessly set up Malouda with a pass and our much-maligned Frenchman depatched it into the goal past Friedel. Like last Spring, Malouda’s form is now a joy. I didn’t capture his celebrations on film, but just stood and watched him give “high-fives” to about ten lucky Chelsea fans in the front fow of the MHL. I was smiling, lapping up the moment. It was a perfect moment of players and fans together, as one. To be honest, it left me quite giddy and I had to sit for a few seconds.

We couldn’t believe it.

The heavens opened with quite a deluge and we wondered if Lovejoy, sitting in the front row of the East, would run for cover. We then serenaded Villa with –

“Are you West Ham in disguise?”

We then heard that West Ham were losing…fantastic. However, the Goons had scored a late goal.

Nicolas Anelka, who was working tirelessly all afternoon, did so well to hang on to the ball before setting up Salomon Kalou to rifle home.

6-1. This was getting crazier by the minute. Even Kalou had scored.

There was then a lovely moment. For a while now, the manager’s abilities have been debated and concerns have been raised. I have always said he needs time. My tune hasn’t changed. Others haven’t been so forgiving. So – out of the MHU came a lovely chant…

The PA announced “another four minutes” and I whimsically commented “enough time for at least two more then.”

Sure enough, Frank blasted in a loose ball and the stadium roared once more.

7-1. This was totally overwhelming stuff. As someone once said…”Football. Bloody hell.”

Who would have thought that – after the disappointment of Ewood Park – we would respond with twelve league goals in four days. I wondered if we had ever scored twelve in two consecutive league games ever before. Surely not. And yet – bizarrely, magnificently – this had been the second time we had scored 12 in consecutive games this season, having followed up the 5-0 bashing of poor Watford in the FA Cup with the 7-2 annihilation of The Mackems in January.

On a day when Super Frank blitzed his way into the upper echelons of top Chelsea scorers behind only Bobby Tambling and Kerry Dixon. For a midfielder, this is some achievement. And on a day when John Terry crept past Ron Harris in total appearances as Chelsea captain.

Both were enjoying the celebrations at the end of the game, soaked to the skin, but so, so happy.

What a perfect afternoon. However, as we were still smiling from our win, the PA announced –

“Birmingham City 1 Arsenal 1” and The Bridge bounced again. I punched the air and let off my biggest roar of the whole day.

The texts of stunned exhileration started to fly around and I joined the slow-moving tide of euphoric Chelsea fans walking slowly down the Fulham Road. My face was aching with all of the smiling. I spotted a cute WPC a few yards ahead and how I never planted a kiss on her cheek I will never now.

We met up back outside The Goose and I gave Folsom Steve a bear hug. He couldn’t belive what he had just seen. We thought of Starla, 7,000 miles for one game, and we wondered how she was coping!

A while back, I asked the question “is our cup half-full or half-empty” and although I still don’t know the answer, be sure of this.

The next six league games ( three at home, three away ) will be some of the most exciting any of us will possibly witness.

Our game at Old Trafford next Saturday is already dominating my mind. The next week will be full of conjecture, banter and excitement. It reminds me of the week before the FA Cup Finals of old.

Fasten those seat belts, everyone. 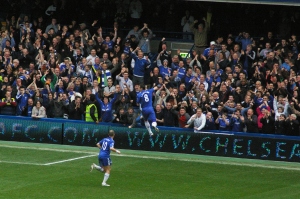