Not so much a matter of cups being half-empty or half-full. Against Stoke City, our cup overflowed.

But – really – if only I had known that we would triumph so remarkably, I would have been able to enjoy the prolonged pre-match a little more.

I awoke early on Sunday morning and was sick with nerves. Outside, the weather was surprisingly damp and drizzly. My mood had taken a downward swing after United’s predictable win against Spurs and I knew that the Stoke game would be a tense affair. Steve Azar was still in town – what luck! – and I got him a seat next to myself as Glenn couldn’t make it due to work. We texted each other soon after 8am –

Chris – Up early, already Jack Kerouac. Nervous as hell. Joining us for breakfast?

Steve – I’ll be there. We need to defend those corners.

Chris – What, at breakfast?

I kept thinking that an early goal would settle us nicely. One at around 11am would be perfect. I picked up Parky at about 9am and we spent the first hour nervously chatting away about the Spurs game ( we both thought that it was bad policy for the Chelsea team to be watching the Manchester derby – it certainly affected us. This was foolish and a black mark against the manager ), the Stoke game, the Liverpool game, the Cup Final, the whole nine yards. Sartorially, we were like two peas in a pod.

I joined the M4 at Hungerford. Depeche Mode were on the CD and the chat quietened down. The music added to the drama and those drum beats banged away at me. There were the usual familiar sights on the approach into town. At around 11am, the rain worsened, but we joined Steve for a Full Monty breakfast in good time. It was to be Steve’s last “proper” breakfast for a while. Again, the talk was full of our predictions for the day ahead. Despite the problems with air travel, many Americans had flown over and it was going to be another hectic one. We zipped past three NYBs waiting for The Goose to open at midday as we headed down towards The Bridge. Thankfully, the rain had subsided.

For about an hour and a quarter, Parky, Steve and myself – to be joined by Beth, who was in the UK for a week after swapping her flights rather dramatically – stayed in the hotel foyer along with the legendary triumvirate of Ron Harris, Charlie Cooke and Peter Bonetti. It was a lovely time and I could see that Steve was enjoying the chat with Chopper and The Bonnie Prince. A few photos – of course! It was of course great to see Beth again and I was very pleased to receive my copy of the CIA DVD from the summer tour. Ironically, I had spent Saturday evening viewing my own personal camcorder film of California 2007.

We then spent two hours in the beer garden of The Goose. There was a cast of thousands, chatting away. A few familiar faces from the NYBs – the Caminski Family, Mike, Chopper, Carrie, Henry, plus many few more…the biggest surprise was right at the end, when Napoli Frank showed up. I first met Frank on the way to a Mets game in 2008 and he left a big impression on me…a real character. One of the NYBs joked that Frank is such a typical New Yorker that he is on the city flag. Anyway, a big old hug for Frank and plenty of laughter – we last saw each other in Baltimore. For five NYBs, this would be their first ever game at Stamford Bridge…for a couple, their first ever Chelsea game.

Meanwhile, in a corner, The Bing were chatting away.

News came through that the rumours about the Old Firm playing a game at Fenway on July 21st appeared to be true and we spent a good twenty minutes shaking our heads at this crazy decision. Boston won’t know what will hit it. I was still nervous – of course! – about the game and I almost didn’t want to go to the game…like a school exam, I never wanted it to come. I walked down the North End Road with Parky, Wes and Steve, our paces quickening. Steve spotted Cathy and Dog.

Daryl and Simon were being cautious about our chances. I shared a few worries and my stomach churned once more. Into the stadium and blue skies overhead, with white fluffy clouds too. Real Chelsea weather – we always play better in the sun. I noted gaps in the away corner, maybe only 700 Stokies. We had noted a couple in The Goose…no worries.

Our team, without the suspended JT, was very attack-minded, but I wasn’t sure about Kalou in for Joe. Ballack was holding.

We began very brightly and I immediately said to Steve that Ballack was covering lots more ground than usual. With him playing a more withdrawn role, he appeared to have more time and space and he seemed to be revelling in it. Our chances came thick and fast. On 11 minutes, a Lampard shot was parried by the Stoke ‘keeper but Ashley Cole miscued. Ashley began as if he hadn’t been away. Great to see him back, but we were sad that Yuri had been dropped. On 18 minutes, Herr Ballack shot high after a corner. We were peppering the Stoke goal. A great cross from Paolo was glanced goalwards by Drogba, but a great save. Drogba then blazed over from two similar wide positions. Surely a goal would come. This was great stuff.

On 20 minutes, we went ahead…what a touch by Drogba out on the right – that was just amazing – and an equally fine cross low into the danger area. Kalou stooped and we went wild. Steve had an up-close-and-personal performance of our goal celebrations –

On 31 minutes, Drogs set up Frank with a sublime touch and the resultant shot was fumbled into the path of Kalou. He doesn’t miss from there! I turned around and noted that Anna ( who was over in California in 2007 ) was right behind me after getting a drink. I gave her a hug and a kiss – and so her bloke Kevin didn’t feel left out, I did the same to him.

We were purring. A wonderful sweeping move, from Malouda down in the left-back position all of the way through the midfield, with Paolo taking a defender wide with a run outside, the ball was lofted out to Kalou who was pulled down – penalty! Frank blasted it home and the New York Blues – right behind the Shed goal in the lower tier – went into orbit. I imagined Napoli Frank smiling from ear to ear. This was just blissful stuff and I felt all off that nervous worry dissipating in the Spring sun.

At half-time, Neil brought six of the 1970 team out onto the pitch to perform – for one afternoon only! – a special rendition of “Blue Is the Colour” and I heard Ron Harris’ voice dominating the singing. The crowd joined in and it was fantastic. The six of these Chelsea legends – Chopper, The Cat, Charlie, Huddy, Holly and The Sponge – then walked around the pitch, with applause cascading down. As they reached The Shed, a song began –

“The Shed looked up and they saw a great star.
Scoring goals past Pat Jennings from near and from far.
And Chelsea won – as we all knew they would.
And the star of that great team was Peter Osgood.”

In the second, there was a slight lull, but we then began again…Kalou shot over, Ashley had a great dribble into the box but couldn’t connect when it counted, a few free-kicks from distance. Stoke rarely threatened, but Tuncay looked busy.

Ivanovic was having another magnificent game. He really has been our most consistent performer this year. Alan likens his upright stance to Gary Locke. I always think his ‘eighties hair-style gives him the appearance of Joy Divisions’s Ian Curtis ( a man whose hairstyle, it was once said, was imposed upon him )…we love Ivan, Ivo, Branno – whatever we call him – to bits and he is a true Chelsea great. He would have fitted well into that 1970 team. I can just see him alongside Ron Harris.

On 65, Nico shot wide, but soon after, Kalou beat the offside trap to score his third and our fourth, though he needed two bites of the cherry to do so. Like Anelka last year against Sunderland, an “inside the six yard box” hat trick.

On 71, Joe Cole’s first run at the nervous Stoke defence resulted in the miss of the season for Malouda…oh boy, how did he manage to miss-cue from a yard? The substitute Sam Hutchinson then sent over a stupendous cross for Frank Lampard, whose exquisite flick over Bergovic was just amazing. It reminded me of Zola’s last ever goal for us, that other deft lob from the same angle, although further out. Five-nil. Superb. It was appropriate that a player called Hutchinson was involved on a day we remembered the 1970 cup win, some forty years on.

Late on – as we joked about 7 – two more goals…another beautiful through ball from Didi dissected the Stoke defence and Daniel Sturridge swept in his first-ever league goal for us. Then, a ball from Ballack to Joe – buzzing now – and a first-time cross for an exuberant Malouda to belt into the roof of the net.

Screams of delight from us all.

After the 7-2 against Sunderland and the 7-1 against Villa – now the biggest ever top flight Chelsea win. And, it goes without saying, my biggest ever Chelsea win in almost 800 games. Steve didn’t want to leave and so as the crowd slowly filtered out, we stayed for a few more minutes, breathing deeply, taking it all in. Way after the final whistle, on the PA, Bob Marley was wailing again…

We spent an enjoyable time in The Goose, smiling, laughing and sharing the joy of the lucky souls who had flown over for this one game only. What a performance. I know nothing is certain in this crazy season, but this massive confidence boost is just perfect. A nervy 1-0, with the crowd on the team’s back, would have helped for the points total, but not on any other level.

It had been superb having Steve over and it was a bittersweet moment as we said our “goodbyes.”

Heading out of London on the M4, at Brentford, I spotted a massive ( 20 metres by 20 metres ) advertisement for Pepsi-Max featuring an image of Frank Lampard, streaked in paint, exhorting us to “Max Your Wild Side.” How appropriate. I wonder if the Americans, heading back to Heathrow, spotted it. I wonder if Beth will.

OK – if win it at Anfield on Sunday lunchtime and United lose at Sunderland later that afternoon, expect my car to swerve uncontrolably around 6pm on the M5 Southbound…around Stroud, I reckon.

These are the days of our lives. 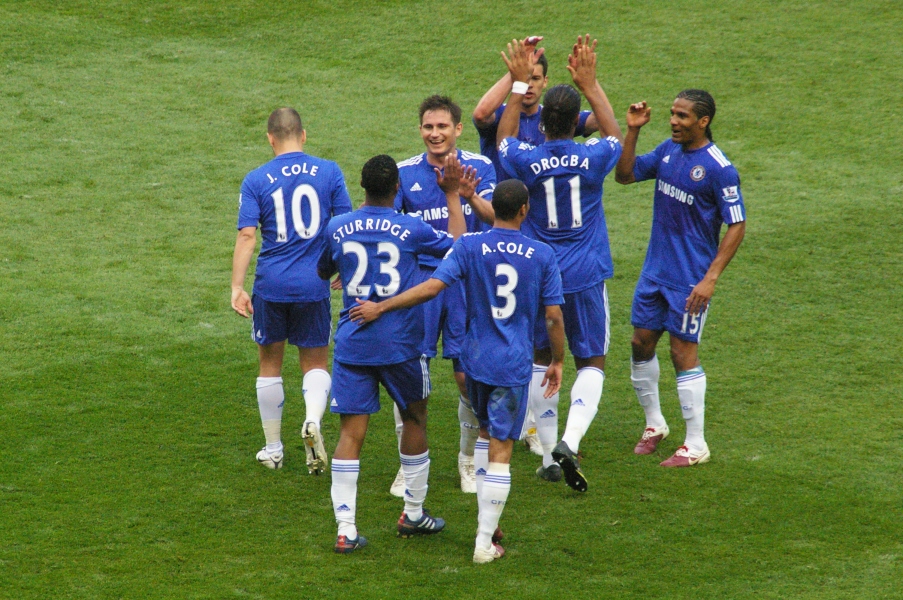