There was a fleeting moment during the first few days of September when my fingers hovered over the keyboard of my PC at work. I had opened up the “buy tickets online” option on the official Chelsea website for the game with Wolves. I quickly weighed up the chances of myself closing the screen down with no purchase taking place. I gave it all a few seconds’ thought. In fact, my indecision took me by surprise. Did I really want to attend the game? Amidst the plethora of games taking place before Christmas, did I really want to pay £26.50 for a low profile League Cup game against Wolves? If I was brutally honest, I probably wasn’t too bothered.

It probably all boiled down to one thing.

If it wasn’t for my unbroken home sequence – the last game I missed was a League Cup game against West Ham in late 2004 – it is quite likely that I would not have gone ahead with the purchase of my seat.

Oh well. This run will come to and end some when. It might happen this season. Maybe not. The run might just stretch to ten years. We’ll see. I certainly know that a League Cup (or Capital One Cup as it is currently known), game is likely to be the one that will be the first to fail. It’s certainly the least important of our domestic competitions and I find it hard to get too enthusiastic about the early stage games.

I collected Gunner Parkins at 4pm. He had been in two minds about attending, too, by the sounds of it. The trip east was unremarkable. At Reading services, I spotted a mini-bus which was festooned with Swansea City flags and Welsh St. David flags. They were on their way to Crawley Town, south of London down past Gatwick airport.

I joked with Parky if the passengers were the same little band of Swansea wannabe hooligans who were memorably featured in a late night TV programme several seasons ago. What a classic tale of questionable navigation skills, poor logistical planning, loutish behaviour, fake Burberry scarves, infighting and general ignorance.

Sit back and laugh –

Were the legendary Johnny The Brains, Tank and Chunky and their little band of Herberts inside the dirty white van? We’ll never know. If they were inside, from previous experience, it is highly likely that they never reached Crawley.

There were warning signs of traffic delays between junctions 7 and 4b and the flow indeed slowed at around 5.30pm. My teeth were grinding together at the thought of being stuck in a traffic jam for an hour or so, then missing the kick-off.

“All because of that bloody run.”

Thankfully, the traffic cleared at around Heathrow. Parky slurped on cans of “Fosters” lager while I consumed two “Starbucks” double-espressos. A lot of road accidents occur in the early evening – eyes tired after a day at work – and I knew I needed artificial stimulation. While we listened to the classic “Never Mind The Bollocks” by the Sex Pistols, I contemplated how big the gate would be. I had seen on the website that tickets were still on sale. I tendered that the attendance would range from 32,000 to 37,000. I expected 3,000 away fans to bolster the ranks; the tickets, after all, were virtually half the price of league games.

The sky above London at Brentford, as I curled around on the elevated section of the M4, was a picture. The fading sun was catching great towers of cloud to the south. Ahead, the skyscrapers of the city were just visible. I still get excited about driving into the nation’s capital even after all these years.

We made it into The Goose at 6.30pm and I maintained my reputation of “One Pint Axon.”

Talk was of the team that the manager would field. We ran through some options. It was clear that, on paper, we could field a pretty formidable “B” team if required involving Romeu, Bertrand, Moses, Marin, Azpilicueta, Cahill and Sturridge.

The team came through via a message on Gary’s ‘phone and there were a couple of surprises; notably John Terry, fresh from his trial, and Fernando Torres. It was clear that di Matteo was persevering with Torres, although, in truth – without the still injured Studge – we had no real choice. I hope we don’t rue the loan of Lukaku to Wolves’ great rivals West Brom. The midfield was again set up to feed Torres; Moses, Mata and Piazon were to be the providers. With Wolves the opposition I enthusiastically commented to Daryl –

His look suggested that my optimism was rather wide of the mark, like a Torres strike, maybe.

Empty seats in the East Stand greeted my arrival in The Sleepy Hollow. Down below, there were further unoccupied seats in the corners of the MHL. There was a huge segregation gap of some 2,000 empty seats in The Shed. In the West Stand corners, more of the same. The Wolves support numbered just 1,000. I immediately thought back to the loud and noisy 6,000 Burnley fans that had travelled down from Lancashire for a League cup game in 2008. Of course, there was a good reason for this; it was Burnley’s first visit to The Bridge in around 25 years. Wolves, however, were here last season.

Just before the kick-off, there was a hearty rendition of” One England Captain” and John Terry turned to acknowledge the Matthew Harding. The song would be continually repeated throughout the evening. What a disgrace that John’s role in the England team has been undermined by the toe-curlingly vindictive fools in Soho Square.

The game was virtually all over after just seven minutes.

I watched as Gary Cahill peeled away from his marker in the six yard box, but then reappeared in acres of space at the far post. It certainly helped that Juan Mata’s pacy free-kick was inch perfect. A great start. Gary is scoring goals for Chelsea with the same regularity as John Terry; a good sign.

Oriel Romeu’s firm low strike brought a save from the Wolves custodian, but the ball was soon played back into the path of the waiting Ryan Bertrand, who took no time to despatch the ball goal wards. It was a fine finish.

The song of the season soon followed.

We knew what we were.

However, a word of warning. I have the distinct feeling that this song, so perfect at the moment, may well suck all the life out of our hunt for new songs. It is now the default Chelsea song instead of “Carefree.” I’m not saying that we’ll get bored with it. I’m just saying that other songs will need to wait their turn.

What a delightful “one-two” from Torres to set up Juan Mata inside the box.

3-0 and coasting. The performance of the debutants Lucas Piazon and Cesar Azpilicueta was excellent. It was a stirring forty-five minutes of near constant Chelsea possession.

Frank Sinclair was on the pitch with Neil Barnett at the half-time break.

From my viewpoint in the wraparound, I thought that Victor Moses certainly made the most of the challenge from the Wolves’ keeper. When I saw the referee approach, I actually presumed that Moses would be booked for simulation. Imagine my surprise when we were given a penalty. Many fellow fans in my section were as surprised as myself.

Oriel Romeu, not Torres, took the penalty and slammed it home.

A Mata corner was met by the clear leap of Torres at the near post and the ball flashed into the net.

I’ve still seen every single one of Nando’s goals for Chelsea. He is now up to sixteen. He’s getting there, slowly. I must say that I hate the “he scores when he wants” chant.

I must say that I liked the look of Marko Marin, the other debutant, during his time on the pitch after his appearance as a substitute. He was full of endeavour and skill. His run set up Oscar – another substitute – to cross for Moses to head down for our sixth goal of the night.

It looks like we can add Moses and Marin to the list of creative support players whose main role will be to create chances for Fernando Torres. Moses again pleased me. Apart from all six goals coming from six different players, I was also warmed by the great appetite shown by all of our players during the game. We showed great application and tremendous enthusiasm right up to the final whistle.

I took a while to leave the stadium. Outside, I tried my hardest to take a few photographs of the Peter Osgood statue, a cool dark grey in the evening light, with the moon high above. I couldn’t quite get the setting on my new camera correct and I will need to go back to have another stab at that. There were voices of many tourists milling around as I left the forecourt to the West Stand. With the ivy and the lights on the old Shed wall to one side and the montage of past players and fans on the wall on the other, it is an area which is developing a character all of itself. The Osgood statue, of course, is the understated focal point of the whole area. With the West Stand façade now adorned with many banners from Wembley and Munich, the sense of place which the area projects is near perfect.

I raced home – a Red Bull to add to my cocktail of stimulants this time – and, after dropping His Lordship off, I was back in Somerset by 12.30am.

Thoughts about the next round? A local away jaunt to Swindon Town, a mere 30 minutes away from where I work, would be just perfect.

Of course, Brains, Tank and Chunky could be waiting for us too.

If they can find their way back to Wales. 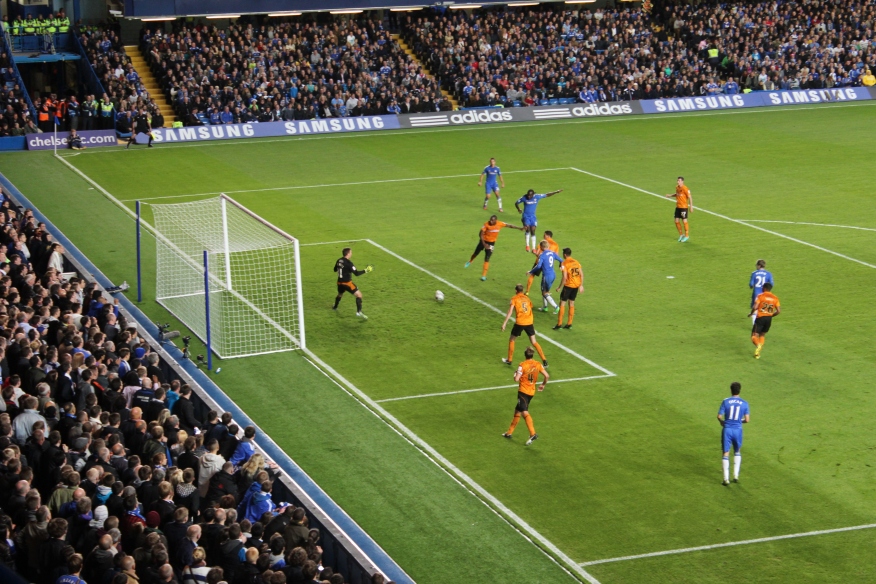