After my fortnight in the US, I was still suffering from jet-lag. My haphazard sleeping patterns had left me disorientated.

I was hoping that my first domestic Chelsea game of the season would help get me back in the groove.

I called for Parky at around 9.15am. Despite suffering from a frustrating period of ill health, Parky was soon bubbling with infectious enthusiasm as I hurtled south.

Apart from the occasional trip to Fratton Park, the journey to Brighton was one of the few occasions in the past few years that I’ve had a change in direction. Most Chelsea trips are either to my east or north. Swansea last season was to the west.

Oh – and New York and Philadelphia.

I reviewed my US trip with Parky and we were soon chatting away in the style that we have become accustomed since I started taking him to footy three or four years ago.

We zipped past Salisbury, Southampton and Portsmouth (town names that I had noted from my recent stay in New England), but our progress was halted by considerable traffic near Chichester. A journey which should have taken three hours actually took four.

At 1.15pm, I eventually parked up at my friend Paul’s bungalow right on the northern edge of the town. I first met Paul on The Benches in 1984. Born in London, he moved down to Brighton in his teens. Paul’s wife Sue soon dropped us off outside the new Amex Stadium. Another new ground for me.

Believe it or not, I had only ever seen Brighton play once before.

Back in 1990-1991, when I was on the dole and low on funds, I only went to ten Chelsea games that season. However, a mate of mine asked me along to see his team Scunthorpe United play at Brighton in the third round of the F.A. Cup. It represented a cheap day out and I almost enjoyed it in a bizarre way. Back in those days, Brighton played at the Goldstone Ground, an odd-shaped stadium in Hove. I remember Clive Walker and Ray Wilkins’ brother Dean playing for Brighton.

We haven’t played Brighton for years. Four games in 1983-1984 and 1988-1989 during our promotion campaigns from the second division are all that I can ever remember.

Brighton have had a chequered recent history. They lost the tenancy of the old ground and even played in Gillingham for two years, some seventy miles away, before returning to a poorly-equipped athletics stadium in the town from 1999.

The Amex Stadium on the campus of Sussex University at Falmer opened for business last season and I was pleased to be able to visit it.

We soon bumped into Gill and Graeme, and then headed upstairs to the bar in the stand. I didn’t see many that I knew. It was soon apparent that many Chelsea had been on the beer all day – and the previous night too. After a couple of lagers, we took our places in the upper tier of the west stand. The Amex is currently having an extra tier fitted onto the east stand and the south stand – usually housing the away fans – seemed to be having some work done too.

I approved of the stadium. It was a little similar to Huddersfield’s ground, with the arching roof trusses. The best feature was the views of the rolling South Downs which were clearly visible to the north. I had forgotten how hilly the area around Brighton is.

Brighton and Hove Albion’s history is littered with former Chelsea players and I seem to remember Dave Sexton living in the town when he was still manager of Chelsea. The town itself has had a mixed history; enlivened as a beach resort when the railways flooded the resort with holidaying Londoners, it is now a rather bohemian location with a green party MP and a reputation as the UK’s most “gay friendly” town.

One of my favourite films is “Brighton Rock” – a brilliant film directed by John Boulting which was based on Graham Greene’s novel about petty crime in Brighton’s murky underworld. It memorably stars Richard Attenborough as the film’s villain Pinky. There are some lovely photographs of Richard Attenborough, at the time one of England’s rising stars in the film industry, undergoing vigorous work outs at Stamford Bridge with various players such as Tommy Lawton in an attempt to lose some weight for the role.

As I sat with Parky, awaiting the entrance of the two teams, I wondered about my presence at the game. Since returning from my holiday, I had piles of things to do at home. I really, deep down, knew that I should have been getting stuck into some of those mundane tasks but here I was in Sussex, watching Chelsea yet again.

What had brought me there? The lure of a new stadium alone? No, it had to be more than that. I had already seen the boys in America so I – unlike the vast majority of the other 3,500 Chelsea fans present – was not drawn to Brighton so I could see the European Champions for the first time since Munich. What was the reason?

I guess it was the same old reason.

There was a time when I was not so sure.

Way back in 1996, just after England was recovering from the country’s new found infatuation with football at Euro ‘96, Chelsea played a pre-season friendly at the County Ground against Swindon Town. After the purchases of Ruud Gullit and Mark Hughes in the close-season of 1995 which brought a level of excitement to Stamford Bridge which had been missing since the early ‘seventies, the Chelsea squad was further augmented by the signings of Gianluca Vialli, Roberto di Matteo and Frank Leboeuf in the summer of 1996. With this in mind, a local game was too good to miss. An added bonus was that the game in Wiltshire marked the debuts for di Matteo and Leboeuf. My mate Glenn was seeing Anke, a German girl, at the time and it was agreed that it would be beneficial for their relationship for Anke to witness at first hand the Chelsea match day experience. I think that Anke wanted to see just what this football lark was all about. Glenn had met Anke on holiday in Italy a few years before and Anke had been living in England for a few months.

On a sunny Sunday, the three of us drove over the county line and took our seats in the main stand along with a couple of thousand other Chelsea supporters in a gate of 13,881.

Despite the bonus of seeing the two new debutants, the game lacked any real drama, excitement or sense of occasion. To be brutally honest, the game was dire, despite a Chelsea win. Glenn and I soon made a pledge not to bother with any more essentially meaningless pre-season friendlies ever again.

It was a sobering afternoon. It didn’t take much for me to put my loyalty to Chelsea to one side and to see the game through Anke’s eyes.

Anke was never a football fan.

Sometimes it is useful to get a reality check.

There were hardly any positives to come from the game.

The scampering of the players down below on an energy-sapping afternoon and the grunting of the Swindon and Chelsea fans in the stands certainly made me wonder a little about my sanity, my life-long love of football and my allegiance to Chelsea in particular.

As kick-off at The Amex neared, more and more boisterous Chelsea supporters flooded the top tier. My goodness, some ale had been quaffed over the past few hours. From ten minutes before the kick-off to twenty minutes into the game, the noise was deafening.

The Brighton players – plus former blue Gus Poyet – gave the Chelsea players a guard of honour and I scanned the starting eleven. It looked a mighty strong team, with the obvious asterisk next to Michael Essien’s name.

The new “black with yellow paint splashes kit” looked hideous. Never mind, there will be another one along next season.

Consume, indulge, purchase, pay, hand over your wedge, show your support and wear your colours.

Amongst the Chelsea fans at Brighton, never have I seen so few replica shirts. I got the impression that a lot of the lads were going straight back out on the razzle after the final whistle – or even before it – and wearing Chelsea colours in the town’s pubs would be troublesome.

Oh dear. Make no mistake about it, Brighton played very well. They were incisive in their tackling, in their movement and their finishing.

We, however, were leggy and looked jaded. I wasn’t sure if it was due to the travelling to and from America, but the vibes were far from good. As the game developed, the noise from the Chelsea section grew quieter and quieter.

A nice dummy from Fernando Torres allowed Frank to pass the ball into the net towards the end of the first half. It was noticeable that I didn’t even jump to my feet when we scored. What was I saying about pre-season friendlies?

Brighton then went ahead through the impressive Vicente and Barnes to lead 2-1 at the break,

I popped down to see Alan at half-time; the first time I have seen him since Munich. Parky stayed chatting with Cath and missed the first fifteen minutes of the second period. We enjoyed lots of possession after the break, but rarely troubled the Brighton ‘keeper. Shots from Torres, Lampard and the disappointing Hazard were our only efforts of merit. With many Chelsea fans leaving early to head back into town, the game ended with a further calamity when a defensive error – or rather, not playing to the whistle – gave Crofts the chance to tuck the ball in with seven minutes left.

At least the return trip back west only took three hours. Parky and I agreed that we had enjoyed the day out in a general sense; the actual game had been damn tedious. The players would be tested further at Villa Park the following weekend and we hoped that they would rise to the challenge.

I eventually reached home at about 9pm, just in time to see one of the greatest nights in British sporting history at the Olympics.

If only it had extended to Sussex By The Sea. 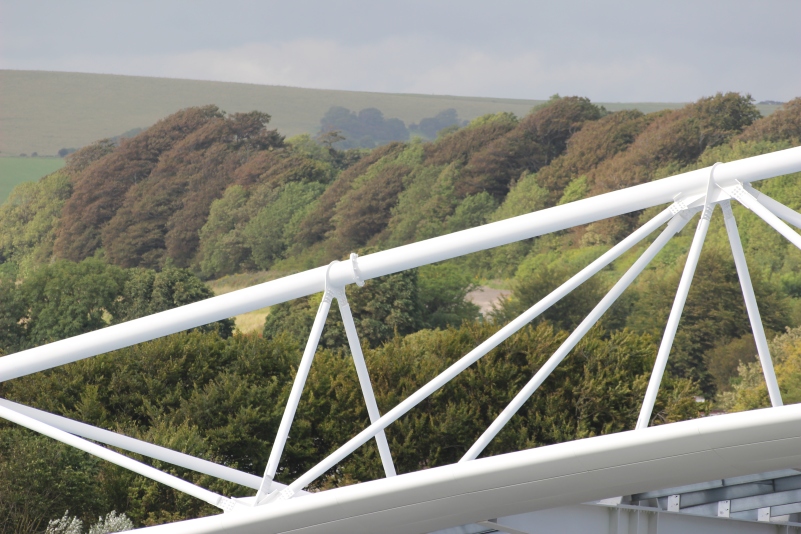