This was a long day. I was up at 4.45am in order to do a rare 6am to 2pm shift at work. I collected Lord Parky, sorted a few priorities out at home and then set off for London at 4pm. We were beset with the usual traffic problems on nearing London. While others were already enjoying pre-match liveners in The Goose, Lord Parky and his designated driver were battling the M4 motorway. Just after 7pm, we made it into the pub. These midweek jaunts to HQ don’t get any easier. No drinks for me, but I believe Parky wolfed down a couple.

So, was this game all about the returning hero Didier Drogba?

I tried to focus on the game.

With a little more composure in front of goal out in Istanbul – the story of our season, surely – this Champions League tie would have been over before this second-leg. In truth – although I wasn’t underestimating the threat of Galatasaray, blah, blah, blah – I was positive about our chances. I hadn’t seen too much to worry me in the away leg.

What to say? As I have stated before, in many ways I wouldn’t have objected too much if the precious moments of Didier Drogba scoring that header and that penalty in Munich were the last memories that I would have of our former goal scorer and club icon on a football pitch.

What pure moments they were.

As we all know, the Chelsea faithful were given one last chance to see Didier back at his former stomping ground. And that can’t be a bad thing, can it? For those unable to witness our win in Munich live, it would be churlish of anyone to deny them this last chance to say a simple “thank you Didi.” However, as I thought about this game during the preceding few days, I was very aware of Didier’s chequered past in the colours of Chelsea Football Club. For every game where his brutal strength and sheer determination won us countless games, there were games where he sulked and pouted. For every thunderous header, there was the laughable dive after the merest hint of contact. For every smile, there was a scowl. As my mate Daryl said in an exchange towards the end of the 2004-2005 season, “no player has split the Chelsea support over recent years as Didier Drogba.”

And how right he was.

In those first couple of seasons, Drogba was on one hand a laughing stock (a commentator once wondered why a footballer with the physique of a heavyweight boxer could fall to the ground after the slightest of challenges like a ballerina) and on one hand a hero. In those first two years, our number 15 was the conundrum. Then, something happened. From season 2006-2007 on, our number 15 became our number 11 and his attitude visibly improved. The theatrics and the risible play-acting decreased. Instead, all of his energies were channelled towards improving his contribution to the team. The change was magnificent. What was the cause of this? I do not know. However, I have always suspected that John Terry took him out for an evening meal, just the two of them, and a few home truths were shared.

From 2006-2007, we all noticed a change. The following two years – ironically, with no championships – there was a widening appreciation of Didier. We warmed to him. He gave his all. He became easier to like. Good times.

And then there was Moscow.

Moscow could have been the end of Didier Drogba at Chelsea. I wasn’t the only one who tussled with some mixed up emotions after his selfish implosion against Manchester United in the rain of the Luzhniki Stadium. There were many who wanted to more of him besmirching our name and sabotaging team morale. After John Terry’s penalty miss on that night, one can only wonder what one-to-one chat took place in the changing room that night. Maybe it’s best that we don’t know. With time, Drogba eventually worked his way back into most of our collective hearts. But, no doubt, for some the bridge had been burned. There would be approval of his goals, but no love for the person. Even as recently as the 2011-2012 season, Drogba was serving up a mixed-bag of performances. There was the prima donna one week, the hero the next. There was a general consensus of Drogba being “a big game player.” The Wembley games came and the Wembley goals were scored.

And then there was Munich.

Munich embellished the legend, and maybe the myth, of Drogba. That game alone cemented his place in our history.  Although there were other stellar performances on that momentous night, it was all about Didier.

The equalising header. The foul for the penalty. The match-winning penalty.

His city. His stadium. His cup.

And now it was our chance to say, despite all of his flaws –

For those of us who were lucky enough to see the game in Istanbul, we had already experienced that odd sensation of seeing Didier playing against us. And it was strange. To be honest, his performance that night was hardly the stuff of legend; he was kept subdued by our Chelsea defenders. A similar performance at Stamford Bridge would be just fine.

Inside the stadium, it was a riot of colour. The three thousand away fans in the allotted section– brightly clad in Galatasaray orange and red – were surely augmented by thousands of London-based Turks in the home areas. Even before the entrance of the teams, they were bellowing their support. Scarves were lofted – with the names of their two main ultra groups in addition to the team name – and the bouncing began. As is so often the case for European home games, the away fans were going to be as much the focus of my attention as the players on the pitch. We had all been given the usual blue and white flags and these were waved with gusto during “Blue Is The Colour.”  Not by me though; I was too busy pointing my camera through 360 degrees.

The teams entered the pitch. And I have to admit it; all eyes were on Didier. I was happy that I captured the moment that Didier spotted the orange “Drogba Legend” banner, now repositioned in the MHU, and pointed in appreciation. As the teams lined up, the evocative CL anthem echoed around the stadium’s four packed stands. Then, to my left, a new flag…a massive square of royal blue, with the Europa / UEFA Cup picked out in white…it was draped down into the MHL. Then, far away in the opposite corner, the Champions  League / European Cup trophy.

I trust that there will be one coming soon to commemorate Athens and Stockholm too.

As the game began, I was relaxed. There was no real fear of us exiting from the competition amid scenes of embarrassment and dismay. There were no frayed nerves. After just four minutes, we took the lead. Neat play from Eden Hazard found Oscar and the ball was played in to Samuel Eto’o. Our striker took just one touch before slamming the ball past the Galatasaray ‘keeper Muslera. Eto’o ran off, gleefully smiling, with The Shed in rapture. A few celebratory leaps and he was then mobbed by his team mates.

I was very content with our performance as the first-half progressed. We chased loose balls, put our opponents under pressure and moved the ball intelligently. Galatasaray were quiet. As they were attacking the Matthew Harding, that man Drogba came under scrutiny, but his involvement was minimal. An optimistic overhead kick and a skybound free-kick were the sum of his efforts.

A free-kick from the right by Frank Lampard was met by John Terry, whose perfectly-timed run had surprised us all. Sadly his fine volley narrowly flew over the bar. Of all JT’s goals, most have been close headers and prods from inside the six yard box. We await his first screamer.

Just before the break, a corner from Frank Lampard was again met by a free-running John Terry. His header was saved, but Gary Cahill was on hand to smash the ball in to the roof of the net.

More celebrations in front of The Shed. Great stuff. We relaxed a little further.

At the break, the much-loved Tore Andre Flo toured the Stamford Bridge pitch and he received a particularly warm reception. His indiscretion of playing a handful of games for Leeds United has been forgotten. It was great to see him again.

As the second-half began, it was the Galatasaray fans who were – sadly – making all of the noise. They were indeed quite a sight. Rhythmic bouncing, shrill whistling, fervent chanting – they had it all. A quite mesmeric run from Eden Hazard, reminiscent of a piss-taking dribble from Pat Nevin in his prime, went on forever, but the final pass to Oscar was ill-judged. His shot was saved. For a while, the Chelsea crowd were quiet. Then, for no apparent reason except for perhaps the humiliation of being out sung yet again, the home support awoke from its stupor and produced an unexpected and very solid display for a good fifteen minute period.

“We all follow the Chelsea, over land and sea – and Leicester.

A Frank Lampard header from an Oscar cross proved to be one of only a few chances that we carved out. I felt that we were playing within ourselves; why not? Galatasaray were clearly one of the poorest teams we had seen in the latter stages of Europe’s biggest prize for some time. The noise still rang out from the home areas.

We sang a very loud “Carefree.”

This was great to hear.

We’re by far the greatest team.

The world has ever seen.”

This was as loud as I have known it for quite a while. As far as I am concerned, Chelsea can win all of the trophies in the world and we can suck up millions of new fans far and wide, but if we – as Chelsea fans – aren’t rocking Stamford Bridge to its foundations every fucking game, we’ve failed.

More of the same please.

A few late chances came and went. The highlight of the closing stages was an audacious flicked back-heel from Eden Hazard which allowed Fernando Torres, a late substitute, to shoot. Nando’s effort sadly didn’t match the quality of the pass. Hazard was the star of our show once more, but Willian’s drive and energy again warmed me.

Without really being aware of what I was doing, I joined in with a chorus praising Didier Drogba. Old habits die hard, eh? To be truthful, this was as easy a Champions League game as I can remember. At the final whistle, there was a roar, but deep inside I knew that sterner challenges lie ahead.

As Didier Drogba walked over to the Galatasaray fans with a few team mates, I wondered how he would choose to end his night. He walked towards the centre-circle, stopped and applauded those still in the stadium. We repaid him with warm thanks and sang his name one last time.

Within a few short seconds, he had disappeared down the tunnel.

The night was over. 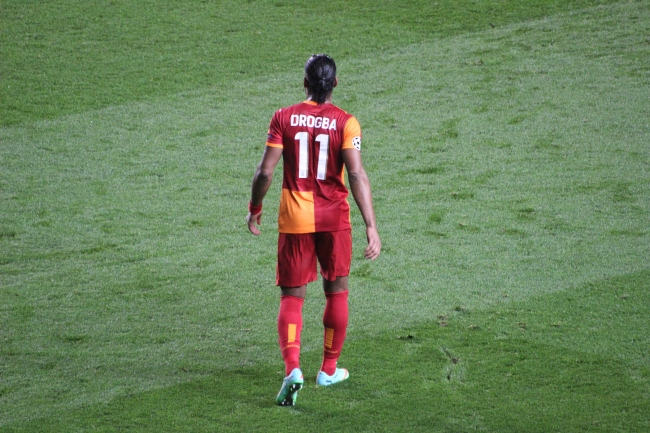