Despite our vivid memories of our “come from behind” triumph against Napoli in the round of sixteen in 2012 – and it was referenced thousands of times around the Chelsea world since the first leg in Paris – I was far from convinced that we would prevail. Throughout the day at work, I was asked if I thought Chelsea would “do it” against Paris St. Germain.

On each occasion, there was the vague “I’m not sure” or the negative “no, I don’t think we will.”

Of course, I lived in hope. We all live in hope. There was just something down, way down, in my being that taught me to do me wary. My view was that I could see us scoring (how? We have no goalscorers?) However, I could also see us conceding (how? We have the best defensive record in the Premier League.) Sometimes, in Planet Football, there is no logic.

Maybe it was the realist in me. Or the pragmatist. Maybe the Chelsea pessimist. I was just wary of too many Chelsea fans getting carried away with our hopes of advancing. I just aimed for a sense of balance. In an attempt to try to put some empirical value on my thoughts, I gave us a 40% chance of getting into the semis. I knew one thing; should my pre-game predictions be way out, I would be in for one of the greatest ninety minutes of football at Stamford Bridge in over forty years.

I collected Lord Parky at 3.30pm and I was able to inform him how I had managed to get him a ticket for the upcoming game in Swansea at the weekend. Parky, unlike me, was more upbeat about our chances against PSG and he took the good news about Swansea to be a fantastic omen for the evening’s game. As I have mentioned before, there is nothing quite like the buzz for a springtime trip to Stamford Bridge for a midweek Champions League knock-out game. With the evenings now lighter, there is a magical feel to the whole proceedings. As I drove east, I revaluated my predictions.

We were delayed by a nasty crash ahead of us around Reading, so our pilgrimage took us a lengthy three hours.

At 6.30pm, we were in The Goose. I spent some time with some of the New York supporters’ group; the lucky five or six who had stayed on from the Stoke City game at the weekend.  After the damp squib atmosphere on Saturday, at least the noise would be a hundred times better against PSG. I was itching to head down to The Bridge and so rounded up the troops and headed south and then east.

The fifteen minute walk was soon over. Frank disappeared to buy half of the contents of all of the stalls on the Fulham Road, while Taryn joined the line for the Upper Tier of the West Upper. This would only be her second game at Stamford Bridge; the Stoke game, on her birthday, was her first. I hoped for great things.

Inside, that “Chelsea Champions League Feeling.”

Just a magical buzz…I could sense the atmosphere building with each minute. Over in the far corner, the three thousand Parisians were adorned with brightly coloured red, white and blue. Noticeably, one section, just above the corner flag, was devoid of scarves, flags and shirts. I presumed this was the PSG version of our executive club.  I wondered if Nicolas Sarkozy and Gerard Depardieu were present – maybe in the West Stand directors’ box – just like in Paris last Wednesday.

The team had been announced while we were in the pub; I guess that it picked itself. The only slight surprise was seeing Frank Lampard. Then, with not long to go, there was the typical pre-game Champions League routine. We had each been given a nylon flag, and some of these were waved as the rather embarrassing opera singer belted out “Blue Is The Colour.” I looked over to the East Middle and noted that the spectators had each been given blue and white bar scarves; the sight, rather than stirring me, made me shudder. I remembered that scarves were similarly given out to spectators in the East Stand for the Internazionale game in 2010. I hoped there would not be a similar result; on that occasion Jose Mourinho was the foe.

Just before the teams entered the pitch, eyes turned towards the balcony of the Matthew Harding Upper. We had already seen the Champions League flag for the first time at the Tottenham game, and it was joined by the Europa League flag against Galatasaray. Now, a third flag – that of the European Cup Winners’ Cup – was unveiled alongside.

As the game began, I was so heartened to hear loud and passionate support booming around the stadium. Talk before the game was of us getting an early goal. It didn’t happen. With each passing glance at the stadium clock…5 minutes, 10 minutes, 15 minutes…we sensed that our golden moment had passed us by. Throughout the first period, the away fans provided constant noise, but without many familiar tunes. A defiant tricolour was constantly held aloft in the Shed Lower. PSG possibly began stronger with Lavezzi showing good involvement, but then Chelsea began to bite back. A few Frank Lampard corners and free-kicks from wide areas were fizzed in, but we were unable to hit targets. Samuel Eto’o was neat in possession, but was often out wide rather than being in the midst of the penalty area. Hazard had shown a few neat touches out on the left, but we were shocked to see him substituted after only around twenty minutes. Without Hazard, our creativity would surely suffer. On came Andre Schurrle. The noise quietened slightly. The nerves began to jangle.

It seemed that the referee, Pedro Proenca, he of the 2012 Final, seemed to book anyone who moved. The frustrations began to increase. Midway through the first-half, maybe caused by a poor refereeing decision, a new chant was born. Maybe someone deep down in the MHL began singing “Fcuk UEFA – We’ve Seen It Before”, but a new chant soon boomed around Stamford Bridge.

“CHAMPIONS OF EUROPE – WE’VE DONE IT BEFORE.”

This was immediately the song de jour.

The noise was fantastic. The whole crowd latched on to the song. Love it.

Our play was typical of this season. A fair bit of possession, but we hardly got behind them. The cutting edge, of course, was missing. A Lampard free-kick was whipped in and the ball took a deflection, but Sirigu pulled off a stunning save. Just after – on 32 minutes – a lofty throw-in from Ivanovic was flicked on by David Luiz. The substitute Schurrle was the first to react and he stroked the ball in.

There was the usual interchange between Alan and myself.

“Zey will have to come at us now.”

A pause, a shrug, and a look of insouciance.

“Come on my little diamonds.”

It was far from an early goal, but – bollocks – it was a first-half goal.

Soon after, Schurrle was clearly energised by his goal and wriggled into the PSG box, but was met with the brick wall of a challenge by Verratti. A loud appeal was turned down. The game continued, with more yellow cards being brandished. At times, as PSG attacked us, I felt myself looking away from the pitch. I can never remember doing this with such a regular occurrence ever before.

After all these games, I was reassured that football – no, wait, Chelsea – still means so much.

Two songs at the break –

“Reasons To Be Cheerful – Part Three.”

Off the pitch, positive feelings. On the pitch, Peter Bonetti was given a tour of the Stamford Bridge turf.

Soon into the second-half, a beautiful strike by Andre Schurrle crashed against the bar. Only seconds later, an Oscar free-kick thudded against the exact same portion of woodwork. The groans were desperate. A Cech save from Lavezzi cheered us. In truth, Cech had not been called on too often. Blanc brought on the impressive Cabaye. Mourinho replaced Lampard with Ba, who was soon flicking on balls for others to run on to. It seemed that, at least for a few minutes, Ba played upfront with Eto’o.

The damned clock kept ticking away. I must’ve glanced at it every two minutes. Cavani blasted high. I noted the reoccurrence of a song that I had heard from the Boulogne Boys in Paris – a PSG version of “Flower Of Scotland.” Javier Pastore – yes him, the scorer of that bloody goal – came on for them. PSG peppered our goal with a few efforts.

As PSG broke, I looked away once more. Cavani wasted a golden opportunity, firing just high of Cech’s goal once more.

With ten minutes to go, Jose Mourinho played his final card, replacing Oscar with Fernando Torres. Three forwards were now on the pitch and the crowd, like the players supporting them, realised the rarity of this and upped the level of support.

Alan and I didn’t know whether to stand or sit. We were up and down like West Bromwich Albion. I had decided not to take many photos. My focus was elsewhere. The team needed my support, so I did my best to roar the team on. Throughout the evening, however – despite the noise – at times the nervousness on the stands resulted in a few periods of quiet. Then, out of nowhere, the noise would begin again. Big John played a great role in galvanising our support; on three or four occasions, he thudded against the balcony wall.

However, there was no denying it; this was tough. Alan rued –

“That third goal in Paris.”

It looked like our European campaign was ending. I momentarily looked back on trips to Bucharest, Istanbul and Paris. It had been a good run. No complaints.

With three minutes remaining, the ball found itself being pin-balled around the PSG box. The ball eventually came out to Dave, who had been excellent all night, and our Spanish right-back come left-back fired the ball in to the box. Miraculously, Demba Ba pounced from close in and the net billowed.

Let It All Out.

We had done it.

I was triumphant, bellowing noise deep from inside my being.

Out of nowhere, Rob bounced down the steps and hugged me and we soon found ourselves bouncing up and down, acting like fools.

I turned around and screamed at a few fans right behind me.

What a litany of magical nights in deepest gorgeous SW6.

The referee signalled four minutes of extra time and Alan began the countdown on his phone. Again, we didn’t know if we should sit or stand. PSG poured forward and – bless him – Petr Cech was able to repel everything. I am not sure if I was more nervous when we were chasing the second goal or after we had scored it.

My whole body was riddled with fear and worry. Why do we do this? Why does it mean so much? Will I ever know?

I was quiet. I looked at the referee.

He brought his whistle to his mouth.

Rob, Gary and Alan bounced to “One Step Beyond” and everyone was exhausted. My smiles were wide, my throat was sore. Then, as the fans slowly left, another song…

“Cus Chelsea…Chelsea Is Our Name.”

We sang as we exited the stadium –

“Portugal, Portugal – We Are Coming.”

As I walked past the Peter Osgood statue, I touched his right boot. It is a little superstition that I have developed on big European nights. More songs walking along the Fulham Road, a few PSG fans sprinkled in among us, but no trouble. I met up with Parky and gloriously headed back to the pub. After a few minutes, Taryn joined us.

I knew what she meant. 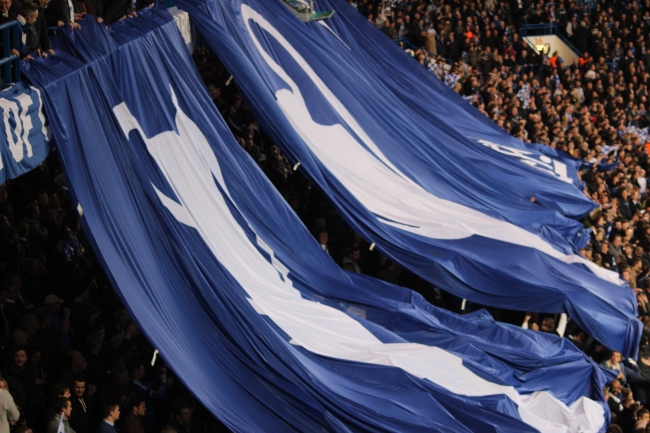 6 thoughts on “Tales From A Night Of Nerves And Noise”