This would be Chelsea’s seventh Champions League semi-final in only eleven seasons.

Time for some numbers.

In the other years, the results were –

In truth, the heartbreak of 2005, 2007 and 2009 are surely some of our most awful memories as Chelsea supporters. Somehow the loss in 2004 – our club’s first semi – seemed quite tame by comparison. After a tough away leg in Monaco, the return was always going to be difficult. We raced into a 2-0 lead, but then…well, you know the story.

I had watched the previous night’s semi-final between Bayern Munich and Real Madrid. Bayern’s capitulation had surprised me; despite odd successes, their recent Champions League story has predominantly featured misery and not joy.

So, Real Madrid – with our former manager Carlo Ancelotti at the helm – awaited the winner in Lisbon on Saturday 24 May. This pleased me, for numerous reasons. Should we be successful against Atletico, the stage would be set for a simply classic confrontation at Benfica’s Estadio da Luz.

I am sure I wasn’t the only Chelsea supporter to let their mind run away with the notion of this. I had gambled on us reaching the final after our win against Paris St. Germain; I had booked flights from Bristol to Lisbon. After the creditable 0-0 at the Vicente Calderon, a hotel room on The Algarve was booked, too.

Personally, there was an extra dimension to all of this.

Should we reach the 2014 Champions League Final, it would be my one thousandth Chelsea game.

In all honesty, this was all too surreal for me to comprehend at times. After the shocking defeat in Moscow, I was convinced that we would never win the European Cup. And yet, just six years later, here we were, with one trophy tucked in our back pockets and another one just 180 minutes away.

Dennis, Parky and I met up with some mates in the beer garden of The Goose. A couple of Atletico fans were inside. There was no hint of bother. Dave – the last of the Anfield Four – was in good spirits; he would be sitting next to me for the game. For once, talk was dominated by the game itself. Simon was “quietly confident” too. This was all very worrying.

News of the team broke and the big surprise was the appearance of Ashley Cole at left-back, presumably forcing Cesar into a midfield role, strikingly reminiscent of Ryan Bertrand’s role in Munich. The absence of Oscar was noted. Fernando Torres was given the start.

As Dennis remarked, it was turning into quite a week for him with visits to his two former homes.

I wanted to get inside the stadium earlier than usual, so I left at around 7pm. It was a perfect evening in London. I was in shirtsleeves and stayed the same the entire evening. At 7.15pm, I was inside. I was initially shocked to see how few fellow supporters were inside. Maybe, on this day of tube strikes, people were forced into a late arrival.

Over in the far corner, a sea of red and white striped shirts.

We waited for the kick-off.

Although the scene before me represented a familiar one; sunny skies, a boisterous away contingent, Champions League logos, familiar names on the advertisements, there seemed to be a lack of anticipation within the home ranks. For a while, all was still. Maybe it was the collective nerves among the home support which made for the quieter-than-expected ambiance.

The TV cameras picked out Diego Maradona and then Claudio Ranieri in the executive areas of the West Stand.

A card had been placed on every seat in the MHU; on it were instructions to hold these cards aloft just before the teams were due to enter the pitch. The overall effect would be of a blue-white-blue-white bar scarf. This was met with unsurprising cynicism from the chaps in the row in front, but I approved. I remember the CISA arranging for the 17,000 Chelsea fans at the 1994 F.A. Cup Final to hold 17,000 blue cards aloft as the players strode across Wembley’s finely manicured lawn, only for the TV cameras to ignore it completely. With around five minutes to go, the hideously embarrassing opera singer wheeled out by the club on European nights sang “Blue Is The Colour” and the usual blue and white scarves, derided by the Scousers at Anfield on Sunday, were waved in the West Lower and the Matthew Harding Lower.

As the teams entered the field, it was our moment. Some 3,000 blue and white cards were held aloft. From the MH balcony, four flags were unfurled.

The only British club to win all four. It was a fantastic sight. I noted that, over in the East Middle, the inhabitants had been given 3,000 bar scarves.

I know that this kind of “forced-participation” is often frowned upon, but Stamford Bridge looked a picture.

As Dave arrived in time for the kick-off, there was a brief interchange.

Chris : “This is where the magic happens.”

I wasn’t happy that Chelsea were kicking “the wrong way” in the first-half. There are not many times that we attack the Matthew Harding in the first-half these days. Of course, prior to 1994 and the demise of The Shed, this was the norm.

At last, some semblance of noise boomed around the stadium as the few attacks from both sides began. Atletico brought the first heart tremor when a dangerously looping cross out on their left caused panic in our defence. It wasn’t readily apparent what had happened after Koke’s cross bounced off the bar. How could it go off for a corner? There was confusion in our defence and in my head too.

Next up, came a Chelsea chance. Ramires was fouled and we prayed for a goal from the free-kick. I caught a Willian’s effort on film, but it flew wide. Atletico were in this game and we tended to stand off as their mobile players raided. There was nervous tension on the pitch and off it. An overhead kick from David Luiz narrowly missed Courtois’ far post, bouncing safely away.

This was a tight game. Fernando Torres, prone to an indulgent dribble – maybe too eager to impress – was not ably supported by Azpilicueta, Willian and Hazard. For too long in the first half, he foraged alone. I noted a lack of intensity all round; from players and supporters alike. Was it the nerves? On several occasions when Atletico cleared, the ball boys threw balls back quickly, yet Chelsea players were often not paying attention and were unable to unsettle Atletico with a quick break. It was a metaphor for our half. We were just too lackadaisical. Jose would not approve.

The crowd tried to generate some noise.

“Champions Of Europe – We’ve Done it Before.”

With ten minutes to go before the break, a strong run from Willian into the Atletico box stirred us all. He held off two strong challenges – and did well to stay on his feet – and the ball ran free. Dave was supporting our Brazilian dynamo and he picked up the loose ball, and played it back into the path of Torres.

The former Atletico captain swept it into the goal.

I jumped up and looked over to Nando. He held his hands up, indicating his reluctance to celebrate fully. Elsewhere, we more than made up for it.

We were on our way to Lisbon.

Chris : “Come on my little diamonth.”

Atletic seized the gauntlet and probed away. Mark Schwarzer, after his fine performance at Anfield, seemed to be coping ably.

Then, on forty-four minutes, misery.

Tiago, our former champion from 2005, swept a ball over to the far post to an unmarked attacker. The ball was knocked back…clenching of muscles…and Lopez struck home.

They had the advantage; that dreaded away goal.

It had been a first-half of few chances; six to us, five to them. At half-time, we presumed that Atletico would sit and protect their narrow advantage. They would, surely, do to us what we did to Liverpool on Sunday.

After the opening few minutes of the second period, Simeone’s game plan was evidently more adventurous. They attacked from the whistle. A Schwarzer save from Turan saved us. At the other end, we gasped in amazement as Courtois dropped to save a John Terry header. Samuel Eto’o replaced Ashley Cole, with Azpilicueta filling in at left-back. He joined up with Torres, with the midfield realigning themselves behind. Then, more calamity.

I was momentarily looking away, so missed Eto’o’s clip which resulted in the Italian referee pointing towards the spot.

We now had to score three times to progress.

The away fans were in triumphant mood.

Chelsea offered moments of hope. David Luiz, strong in tackle, but prone to awful finishing all night, struck a post. Atletico broke away down our right and Turan saw his header crash against the bar. We watched in horror as he easily followed up with a tap in from the rebound.

Stamford Bridge fell flat. It was time to reflect. At least there was no sense of horrendous injustice this time. At least there was no Iniesta-style dagger to the heart. I’d rather take a 3-1 loss than a last minute 1-1 exit. We had met our match, no excuses. Maybe the efforts of the game on Sunday had taken everything. Our one hope, Hazard, had been on the periphery all night. The game fizzled out. Mourinho made some late changes, but an unforgettable recovery was never on the cards. It had been a horrible second-half. We looked second-best. I longed for the whistle to blow.

The Atletico contingent, who had been relatively quiet until their first goal, were now rejoicing. There were songs for their former hero Fernando Torres and for their hated rival Jose Mourinho.

Some home fans had left by the time of the final whistle, but I was heartened by the many Chelsea supporters who stayed to not only thank our players for their efforts throughout the campaign but to applaud the victors.

Rob walked past and tapped me on the shoulder.

“We’ve lost five out of seven semi-finals, but we’d give it all up for Munich.”

At least we have Munich. We’ll always have Munich. And Munich made defeat against Atletico Madrid on a night of harsh reality almost…ALMOST…bearable.

Outside, I waited silently with Dave for Dennis to arrive underneath the statue of Peter Osgood. I looked at his name etched in stone and I looked up at his image. It was a moment for me to give thanks to Ossie, possibly the determining factor in my decision to not only choose Chelsea in 1970 but to stick with the club ever since. After a while, a clearly saddened and emotional Dennis arrived. He was sad we had lost – of course – but was more disgusted by the “fans” around him in the West Lower who had hardly uttered words or songs of support to the team all night.

Then, Dennis spoke and his emotive words made me smile.

“I just need a few moments with The King.”

Outside on the Fulham Road there was an air of quiet reflection of the better team having won as the Chelsea faithful made their way home. Back in The Goose, Dennis – the visitor from over six thousand miles away – was philosophical and humbly grateful. He stood with a pint of lager in his hand and said –

“I’m just happy to be at this latitude and this longitude, right here, right now.”

We all knew what he meant.

As for me, there will be no grand finale in Lisbon. That landmark will have to wait. 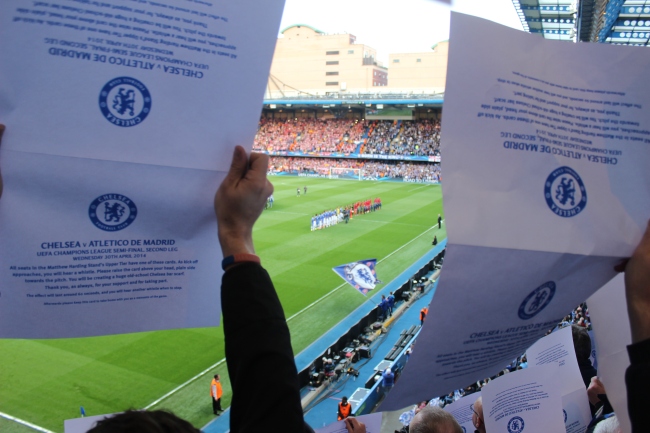