With the talk of an “invincible” league season now behind us, I was hoping for business as usual with the home game against Hull City. Thus far in the league, Chelsea had racked up seven straight wins at Stamford Bridge and, at least on paper, win number eight appeared to be within our grasp.

I was back in the driving seat after having Wednesday “off” after the trip to The Bridge with PD and Parky for the Sporting game. I can’t tell you how lovely it was to be simply able to fall asleep in the car after a Chelsea match for once. Sheer bliss. It was a crisp and sunny winter morning and I soon picked-up Bob Cratchit and Tiny Tim. The three ghosts of Chelsea past, present and future were on our way to Chelsealand once again.

On the way in to town, Sham 69 were the band of choice.

“Hurry up Chrissy, come on – we’re going down the pub.”

We hit The Goose at around midday. I bought a round of drinks – “Come on Scrooge, you tight git” – and we said hello to a few pals. The usual suspects were huddled together in the back bar and a few fellow drinkers were watching the game on TV. Patrick Bamford soon scored for Middlesbrough in their match against his former team – and our League Cup opponents on Tuesday – Derby County. I approved of ‘Boro’s white diagonal on their red shirt, though it is far from traditional.

There were a few moments spent talking about Munich with a couple of mates; I don’t know about anybody else, but just the mere mention of the city elicits a warm glow.

Three special guests popped in to say “hi.” Steve and Sonia, with their young daughter Yasmin, live just outside Sacramento, the state capital of California. Steve was last over for the run-in to the 2010 Double. He was a lucky man; over on work for a couple of months, his stay was extended because of the volcanic ash cloud. This would be Yasmin’s first ever game at Stamford Bridge. She was a picture of excitable giddiness. Yasmin plays football in the team which Steve coaches and is quite a rabid fan. It was fantastic to see them all again. They soon shot off though. Obviously, the lure of a hot portion of chips from a nearby café was stronger than staying in the pub to hear how Parky took on a train carriage of Southampton fans in 1971. Not to worry, I would see them all again at a few more matches over the next three weeks.

On the walk to the stadium, I noted a few changes to the shops lining the North End Road. One of the recent additions is an “Argos.” For those readers not from the UK and therefore not au fait with this particular retail establishment, “Argos” is a unique type of shop over here. There are no – or at least very few – products on show in the shops, but all of the goods are tucked away in a stock-room behind the counter. You check products for sale in a catalogue within the store and fill in a docket, which you hand to an assistant. Ten minutes later, your purchase is handed to you. It’s a rather peculiar, but typically British, and perhaps rather eccentric shop. If I am honest, I am surprised it still exists. Fancy buying products without actually seeing them?

I have reason to believe that Brendan Rodgers buys his Liverpool players from “Argos.”

I was soon inside Stamford Bridge. Hull City were well-supported with 1,400 away fans; a good showing. I soon spotted Steve, Sonia and Yasmin; they had fantastic seats in the very front row of the Shed Upper. I promised Steve that I’d take a few, admittedly long-range, photos of them during the match. It is a big regret that my parents didn’t bring along a camera for my first-ever Chelsea game way back in 1974. To be honest, this is very surprising, since we have hundreds of photographs of “my early years” to this day. In fact, in all of my first ten seasons of match-going, I have one solitary photograph – Butch Wilkins shaking hands with the Southampton captain in 1976 – and it annoys me no end. However, I have certainly made up for it since. Along with a few others – Dave, Peter, Cathy and my mate Alan – I revel in taking my camera along to each and every game I attend. Without a camera, I’d feel odd. I guess we are known as “the Chelsea photographers”. I have to chuckle when some of my photographs appear on various internet forums; it’s nice though. Who’d have thought that the grainy photo I took of The Shed in 1994 would have people reminiscing about terraces twenty years on.

“The Liquidator” played and the teams marched on.

So, the Lions versus the Tigers, a match-up which must make the fellows in the Detroit branch of the Chelsea Family feel slightly odd.

My immediate thought was :

“He has headed that right towards Yasmin and her parents in the Shed Upper. How perfect.”

My second thought was :

“That wasn’t too dissimilar to the first goal that I ever saw at Stamford Bridge when a Mickey Droy cross found a leaping Ian Hutchinson, unmarked, at the North stand end, and whose header went down into the Newcastle goal past Iam Mcfaul way back in 1974.

The only difference is that nobody was on hand to photograph my joyous reaction. In 2014, I did the honours.

Little Yasmin’s face was a picture.

With Chelsea a goal to the good, we enjoyed a pleasing spell of football, but then lost our way a little. Hull City enjoyed a little possession, though never really troubled our defence. On the half-hour mark, the Matthew Harding Lower tried its best to get The Shed to sing. After a poor response, they turned their attention elsewhere.

Blimey, good luck with that, I thought.

Well, what a surprise. Several fans in the East Stand responded and within seconds the whole stadium was echoing to the sound of Lord Of The Dance.

The East Stand as cheerleaders? Another miracle at Christmas.

To be blunt, it was a disappointing half after the early goal. Not for the first time this season, Ivanovic seemed to be our most active player, forever involved on that right flank. After an initial flurry, the creative midfielders created little.

Paul Canoville was on the pitch at half-time. Was it really over 32 years ago that I saw his home debut in a 2-1 defeat to the hands of a fine Luton Town side?

The second-half began and referee Chris Foy continued to hand out seasonal cards. I didn’t really see the Willian “dive” in the first-half, but I must admit I thought that Diego Costa’s fall to the ground in the second-half was rather theatrical. Soon after, Filipe Luis stretched out a leg to claim a loose ball, and Tom Huddlestone went “over the top.” To me and PD – not best placed, obviously – the tackle looked 50/50. How wrong were we?

OK, with our visitors down to ten men, let’s go to work.

However, rather than capitalise, our play became increasingly ragged and the atmosphere turned rather nervy with every misplaced pass and back-pass to Petr Cech. We again lacked real, punishing, width.

Thankfully, salvation came on 68 minutes. Eden Hazard collected the ball and danced into the Hull defence before playing a one-two with Ivanovic (Joey Jones was never this far forward) before playing in Diego Costa with the ball of the match. Diego Costa delicately clipped the ball past McGregor and the ball trundled over the line, to be met by a triumphant roar from all four stands.

The game was safe.

Jose made three late substitutions but we failed to add to our goal tally.

It had been a tough game to watch and not particularly pleasing on the eye. However, with Manchester City winning at Leicester – for now “Frank” or “Lamps” has been replaced by the little less cosy “Lampard” – another home win was hugely valuable.

We go again at Derby and Stoke. 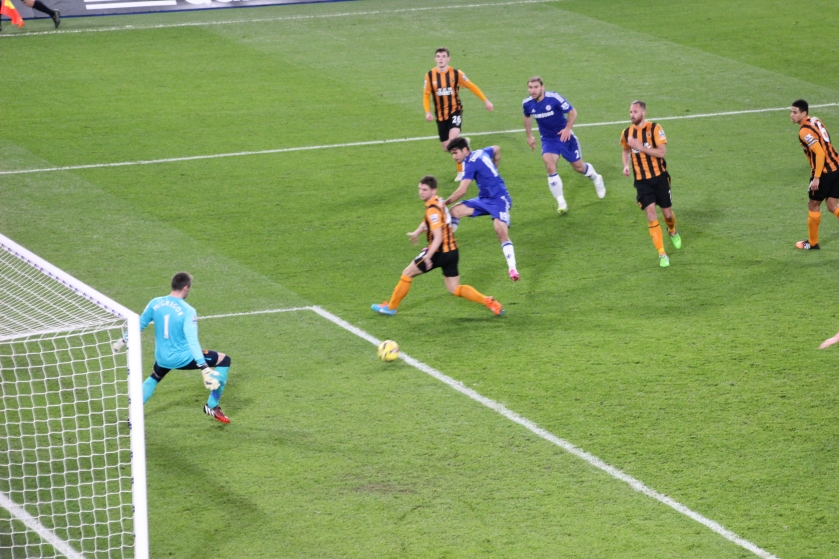 3 thoughts on “Tales From Chelsealand”