Maybe it is because Chelsea are now no longer participating in the latter stages of either the F. A. Cup or the European Cup that the end of this current season, to me at least, seems nearer than it actually is. Prior to our home game against perennial scrappers Stoke City, there were still a full nine games left of 2014-2015. Yet, it seemed like the first week of May, let alone April. We still have almost a full quarter of the season still to play. Our final league game is at the ridiculously late date of Sunday 24 May. Yet in some quarters, it appeared that the title was virtually ours. I was having none of that. Knowing Chelsea, there might still be a way for us to bugger it up at the last minute. Our form, let’s all admit it, hasn’t been too brilliant over the past few months. The swashbuckling exuberance of autumn seems distant. Our last excellent league performance was in Swansea at the start of the year.

It was agreed in the car and in the pub beforehand that a win against Stoke was all that mattered.

It had been a busy pre-match, as they always seem to be these days. There was a slightly surreal feel to everything as I still tried to come to terms with the loss of my mother; these are tough days and nights. The cliché is that Chelsea would be there for me as an emotional crutch, but I wasn’t convinced.

As I walked to and from Stamford Bridge to meet up with friends from near and far, my mind was finding it difficult, if I am honest, to concentrate too much on the game.

I had travelled up to London with Lord Parky, Bournemouth Steve and also Dean. Dean is one of the many northerners in the Chelsea ranks, from Yorkshire, and who I have known for a few years. He has spent a while back-packing in Asia with his wife, but is now retired and house-sitting in a village south of Bath, no more than eight miles away from my home. It was lovely to have him aboard.

As I took my seat alongside Alan and Steve, I spotted a rather poor turnout from The Potteries. If the smaller allocation is 1,400, then surely no more than half of the seats were being utilised. Maybe 600 “Stokies” had travelled down.

Overhead there were clouds and the temperature was far from spring like. An impressive Arsenal win against the fading Liverpool had kept the pressure on us.

On the large TV screens, a montage of images accompanied “Blue Is The Colour” being played over the PA. Our club anthem, of course, was in the charts back in 1972 to accompany our appearance in that year’s Football League Cup Final against Stoke City. I was a Chelsea fan by then, of course, though I do not remember one iota about that game. For the record, the Chelsea first game that I can definitely remember is the opening game of the 1972/1973 season against Leeds. Yes, them.

Just before the teams entered the pitch, the sets of large blue flags – as per usual – began their journey around both tiers of the MH and the top tier of The Shed. I just happened to notice that the one in The Shed – Chelsea FC London SW6 – was temporarily stalled just off-centre. It was stalled for a reason. Above and below it, fans were holding up a few extra banners to provide a pre-match tableau.

WE SHALL NOT BE MOVED.

I took a photograph to capture it for posterity. Good work. The “ruining football” tagline is featured in a famous Chelsea sticker going the rounds at the moment and, as if I really need to explain it, makes an ironic nod to the fools who put all of modern football’s ills squarely at the feet of Roman Abramovich.

The team that Jose Mourinho had chosen did not include Diego Costa. There had been reticence in his voice during Good Friday’s press conference when he was questioned about our hitman’s chances of playing against Stoke City.

It seemed odd to see us attacking the MH in the first-half. I commented to Alan that we don’t often do this. I remembered a last minute match-winner, a screamer, from Frank Lampard, which beat Stoke in 2009, scored at The Shed. But most last-minute winners have always been at “my” end.

As the game got going down below me, I couldn’t help notice – again – the ridiculously varied, and bright, variety of football boots on show. There were blues, whites, yellows, limes, pinks and oranges. I spotted that just one player, Nemanja Matic, was wearing predominantly plain black boots. I then rolled my eyes when I noticed that the soles were pink. Among the Stoke players, the predominant colour was orange. Many players had them. Red socks and orange boots. Ugh. This surely represented the nastiest jarring of colours seen at a Chelsea match since the ridiculously red-headed David Hopkin appeared in the particularly awful tangerine and graphite away kit in around 1995.

JT : “I know, but I have no say. I get paid thousands of pounds by Nike to wear them.”

JT : “About those black boots.”

We dominated everything in the first-half. Two early chances from Loic Remy, the match-winner at Hull, gave us a sense of hope. Further efforts from Hazard and Oscar followed. Stoke attacks were rare. For all of our possession, there was a typical growing anxiety among the home fans as the minutes passed by with no goal. Oscar was pretty quiet. Matic’ passing was off. Fabregas seemed to want an extra touch. There wasn’t the intensity of previous months. The team looked lacking in confidence at times.

Thankfully, on thirty-eight minutes, a run from Fabregas was found by Willian. His quick turn was too much for the Stoke defender Wollscheid (who?) and a clumsy challenge gave the referee no option.

The crowd responded with a guttural roar.

Chris : “Come on my little ducks.”

Stoke responded in typical fashion, leaving Fabregas bloodied after a challenge by Charlie Adam. Just before half-time, the Chelsea crowd were howling after a tackle on Hazard down below me was not punished, but as the ball was moved out to that man Adam, few of us could have been prepared for what followed.

Inside his own half, by around ten yards, the unlikable midfielder looked up, spotted Thibaut Courtois off his line, and pummelled a shot high into the air. It carried on and on, and although hit with precision and pace, seemed to take forever to reach its intended target. The back-peddling Courtois leapt but could only palm the ball into the net. The away supporters, quiet until then, roared in delirious pleasure.

Courtois could not be blamed surely. It was a stunning goal. When it was replayed back on the screens at the break, the strike was applauded by a few in the home areas. That doesn’t happen too often.

Jose replaced the miss-firing Oscar with Diego Costa to offer support to Remy. However, after just ten minutes, Diego pulled-up with a hamstring problem. This was a massive blow and I wondered if things, on the small scale of the match and of the large scale of the season, just got a lot lot worse. Didier Drogba was introduced. The dices were being rolled. Thankfully, the home crowd, realising that the team needed us, got going. The atmosphere had been so-so in the first-half so I was very thankful, and rather surprised if I am honest, to see things improve rapidly.

Down below me in the MHL, the spectators – standing, always standing – provided a riot of noise, with the “Matthew Harding’s Blue And White Army” chant going on for a while (with associated clapping – which the MHU joined in with.) It was a lovely sight and sound. I had warned two first-time visitors from Washington DC about the lukewarm atmosphere at games of late, but I was so happy for them that this surprising din was turning The Bridge into a proper stadium once more.

Just after the sixty-minute mark, a poor clearance by Begovic was picked up by Willian. He moved the ball to Eden, who selflessly played in Remy.

Rather strangely, Mourinho immediately replaced the goalscorer with Juan Cuardrado.

N’Zonzi hit the outside of Courtois’ right hand post.

The atmosphere inside the stadium grew tenser with each passing minute. This was certainly not an enjoyable game of football. With an equaliser only one kick away, nobody could relax. Begovic miraculously stopped Cuardrado not once but twice from close range. The seemingly endless list of Stoke players receiving yellow cards continued as substitute Crouch launched a scissor attack on the resilient, and brilliant, Hazard.

Four minutes of extra-time was signalled and as the last few seconds ticked by, my eyes were on referee Jonathan Moss.

On the walk out of the stadium, one phrase was often repeated.

“Bloody hell, let’s hope that the last eight games are not all like that.” 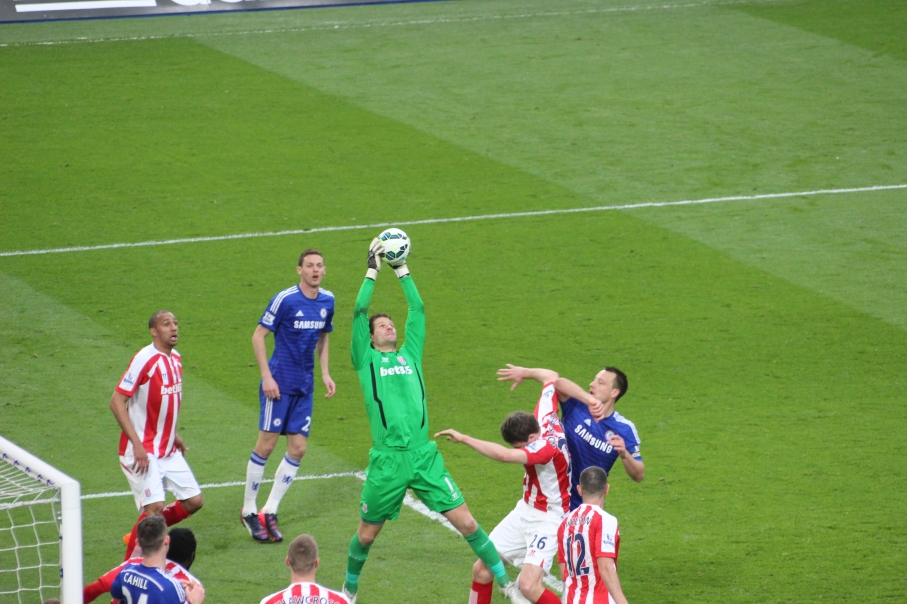