Following our stirring 2-0 victory over Arsenal, there followed a midweek match in the League Cup – I’m going to resolutely refrain from calling it by its current pseudonym – against League One, er Third Division – high flyers Walsall.

Here was a game which I was really relishing, although the main reason was due to me being able to tick off another new ground in the never-ending list of venues where I have seen Chelsea play. Of course, there have been Chelsea games at Walsall’s former home Fellows Park before. Everyone had been referencing the 7-0 win during our 1988/1989 promotion campaign, but I also recollect a League Cup match in 1984. Neither of these did I attend.

Walsall is just a few miles further north than West Brom’s stadium, so here was a relatively easy away game. After work, I collected Parky and we were soon on our way up the M5. This would be the first of three back-to-back-to back away games for myself; the game in the West Midlands would be followed in quick succession by games on Tyneside and in Portugal. At Gloucester Services, we happened to bump in to four of Trowbridge’s finest, who themselves were heading up to Newcastle at the weekend. Three of them would be on the same flight from Bristol as myself.

I must pass Walsall’s compact Bescot Stadium, nestled alongside some huge advertising hoardings which overlook an elevated section of the M6 as it works its way out of Birmingham, five or six times every season. The upper deck of one of its stands is a familiar sight as I head north on numerous Chelsea away trips. On this occasion, I would be stopping by and paying it a visit.

We made good time, and I was parked-up in a quiet residential street about a mile from the stadium at around 6.30pm. The match programme mentioned our most recent encounter with Walsall, and it was a game that I had forgotten all about; a 1993 League Cup game at Stamford Bridge, which had followed on from the first leg at the Bescot Stadium, back in the days when the early round was a two-legged affair. Those of a nervous disposition might want to look away now, but the gates at the two games were 5,510 in Walsall and just 7,646 in West London. The home game included that rare event, a Robert Fleck goal. More of him later.

Inside the stadium, we enjoyed a pint in the cramped bar which ran beneath the terraces of the away stand. Originally, the stadium consisted of four small stands, but the home end is now double-decked with a line of executive boxes splitting the two tiers. The songs soon started, and there were the first of many “Zigger Zaggers” which continually popped up throughout the evening. I was right behind the goal, towards the back of the slight stand. There were many familiar faces nearby within the 1,500 away support. Parky’s seat was only seven seats away from me, so he soon sauntered over to join me.

If some Chelsea games were films, then some of our most dramatic encounters could be likened to tense thrillers. Some of European nights fall in to that genre. How about those games in the Champions League with Barcelona and Liverpool. Some could be likened to sweeping epics, like some of our domestic cup ties, rolling on, with replay after replay. Others could be mysteries – how did we lose that game? – or maybe even whodunits – who was responsible for that loss? The game at the Bescot Stadium on Wednesday 23 September 2015, watched by an easily distracted away support, almost resembled an old style Ealing Comedy, or maybe a Carry On film, with a catalogue of comedic moments, ribald jokes, typical British humour, and allied high-jinks. It was a – to coin an often used phrase in the Chelsea lexicon of late – “proper” old school evening out.

I thoroughly enjoyed it.

The team selection soon filtered through. It was a mix of old and new.

Despite a lot of League Cup games drawing pitiful crowds these days, I was happy to see a full house, with few seats unused, as at Shrewsbury almost a year ago. As the Chelsea players ran towards us, I wondered what was going through captain John Terry’s mind, now playing for his place alongside a few others not now guaranteed automatic selection.

Not only did the team begin well, but the buoyant away crowd were soon delving in to the well-thumbed pages of the Chelsea songbook. The night of song and revelry began.

“We all follow the Chelsea, over land and sea…”

“Here for the Chelsea…”

Our noisy support was rewarded with a headed goal from Ramires at the far post after a fine cross from Kenedy on just ten minutes. The songs continued.

“Bertie Mee said to Bill Shankly have you heard of the North Bank Highbury..?”

“The Shed looked up and they saw a great star, scoring goals past Pat Jennings from near and from far…”

We played some nice stuff as the game continued and I remember being impressed with the neatness of Ruben Loftus-Cheek’s touch and the eagerness and speed of Kenedy. One earnest run, direct and forceful, was scintillating. However, Walsall had their moments and matched us for attempts on goal. It is just as well that their shots were truly woeful. Ivanovic, had a patchy first-half, and looked to be way off the pace one minute, yet strong the next. Overall, it was a pretty decent Chelsea performance. We just looked, obviously, fitter and faster than our opponents. A superb ball from Mikel found Falcao, who went close. I liked the relationship between Kenedy and Baba on the left. It looked a far more fluid attacking area than the stop / start nature of our attacks down the opposite flank. Among it all, Loftus-Cheek was keeping things solid and picking some fine passes. We went two goals up when Ramires picked out Remy, himself impressive, who smashed the ball home.

However, just as it looked like the game was won before half-time, Walsall managed to get a goal back. I thought Begovic did ever so well to foil an effort from a free-kick; he had moved slightly to his right, but quickly flung himself to the left to push out an effort. Alas, the ball ran to O’Connor who nudged the ball over the line from an angle. The home crowd made a racket as they celebrated a surprise goal.

Soon in to the second period, Kenedy struck home after a fine move and we regained our two-goal lead. Bolstered by some half-time drinks, the songs continued.

“Sacked in the morning…”

“You’ve had your shower, now fuck off home…”

The Chelsea support was in full-on “Micky-Taking” mode now and the songs continued.

There was even a solid attempt at “Chelsea Ranger”, a song more suited to pre-match pubs and bars than during actual games. It is rarely heard during matches.

Pedro came on for Kenedy.

“In the middle of our pitch…”

Walsall had a few chances. A fine dribble from Remy, looking confident, was good to see. However, it was disheartening to see Radamel Falcao floundering in front of goal in front of us. I am just so pleased he scored against Palace, or we could be suffering a Torres-style goal drought. In the closing moments, Pedro advanced and shimmied before sending a low shot towards goal, which the Walsall ‘keeper should have saved, but the ball was possibly too close and low for him to react.

In the last few seconds, Falcao was replaced by Papys Djilobodji.

As I made my way slowly out of the away seats, a young policewoman called me over, pointing at a few sticks of celery which had found their way on to the grass.

“What’s with the celery?”

I smiled and partially explained it, but didn’t elaborate fully.

This had been an enjoyable evening, plenty of songs, lots of familiar faces, and four goal scorers. We soon learned that we had been drawn away at Stoke City, just up the road, in the next round. Would I be heading past Bescot Stadium once more next month? It’s highly likely.

But first, we take on Newcastle United and Porto in their home cities. 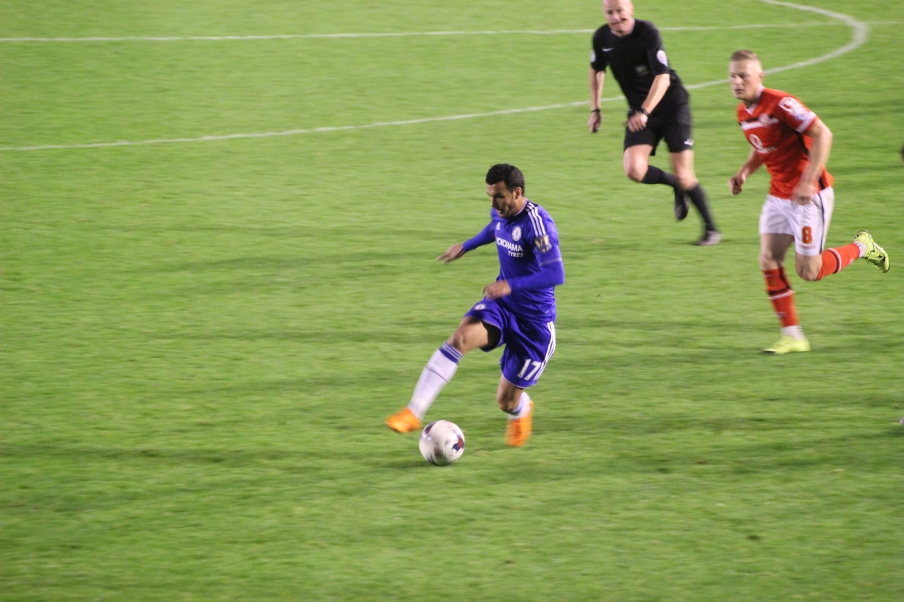