Some words to accompany twenty pictures from a typical Chelsea Saturday in 2015.

On the elevated section of the M4 motorway, with the floodlights of Griffin Park ahead, Stamford Bridge was near. Amidst a CD of Northern Soul, a thought or two of the game ahead.

“This is a game that we will win, boys. Villa are bloody rubbish.”

The pubs around Chelsea, sadly, are in decline. There is always The Goose, but The Wee Imp closed after the Southampton game, with the Prince Of Wales and the Lillee Langtry to close within a few months to make way for flats. The Wellington closed recently, following close on the heels of The Barrow Boy. The Rylston, last visited before the Bradford City cup loss at the start of the year, is a fine boozer. With Glenn driving, at last I was able to indulge in a few beers for the first time this season since the US. Oh, and Porto. How could I forget?

“Peroni” lager, “Nike” trainers and “Henri Lloyd” jeans. After a very tough week at work –  long hours, relentless – this was time for me to relax in the beer garden. The autumnal sun of a fortnight earlier had faded, but the cool air outside was most welcome. 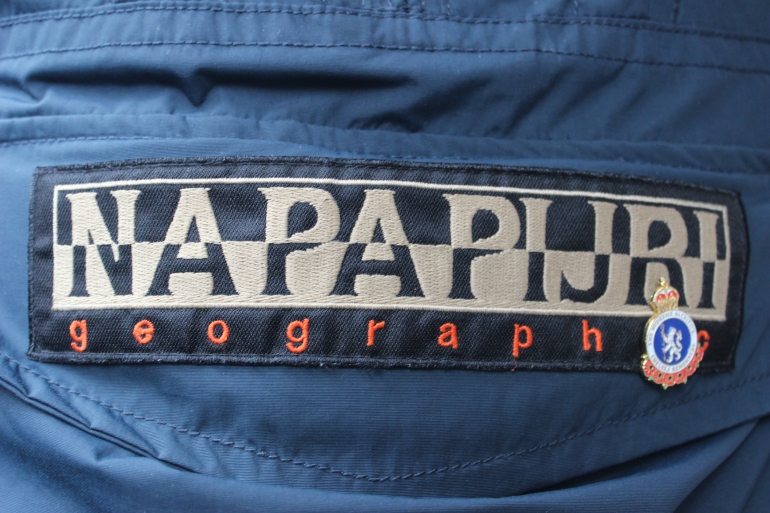 Glenn has owned a fair bit of “Napapijri” over the years. He loved his skidoo jacket. This one is worn by Parky, with a Chelsea Remembrance Sunday badge perfectly placed. 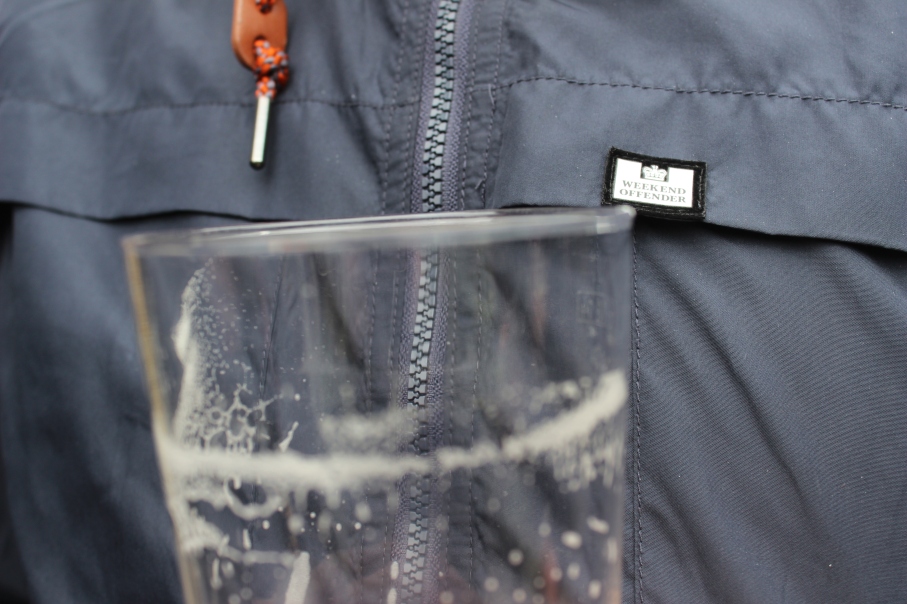 A half-full, or a half-empty pint of lager, and a football functional top from “Weekend Offender”, a new player on the football scene of recent seasons. No frills, just football.

Seven : Two For A Fiver.

Flags and emblems, club and country, nationalism, patriotism, rivalries, identity, poppies and something for the ladies.

The first cold Saturday of the season and I spent an inevitable few minutes deciding what to wear. This “Armani Jeans” number came out on top. Muted blue, just right. With a new Chelsea badge alongside.

“Right, who wants another beer?”

The team news were discussed in the boozer. Begovic in goal. With Ivanovic out, Baba Rahman was in at left-back, with Cesar Azpilicueta shunted over to right-back. JT with King Kurt in the middle. The team line-ups suggested Loftus-Cheek alongside Ramires and this was met with approval. Further up-field, no place for Eden Hazard, with the midfield three of Pedro, Fabregas and Willian. The much-missed Diego Costa back to lead the line.

The walk along Fulham Road, earlier than usual, was a chance for me to slow down and take it all in. I wondered how long I would be walking along this little stretch of West London. To be honest, my renewed interest in my local team, Frome Town, has brought me an extra dimension to my football over recent years. There was a little part of me that was annoyed that I would be missing the Robins’ home game against Bedworth United. With a third new stand being constructed – a surprisingly deep side terrace, providing cover on all four sides of the increasingly impressive home ground – and an upturn in fortunes since a new manager took over, I can see myself turning towards my home town more and more over the next few seasons. My first-ever football game, after all, was at Frome Town, in 1970, when I was just five. Wait a bloody minute. There is no reason why I can’t do both is there? Of course not. And I’d hope that I am no football snob. Football at a lower level is just every bit as interesting if it means something. 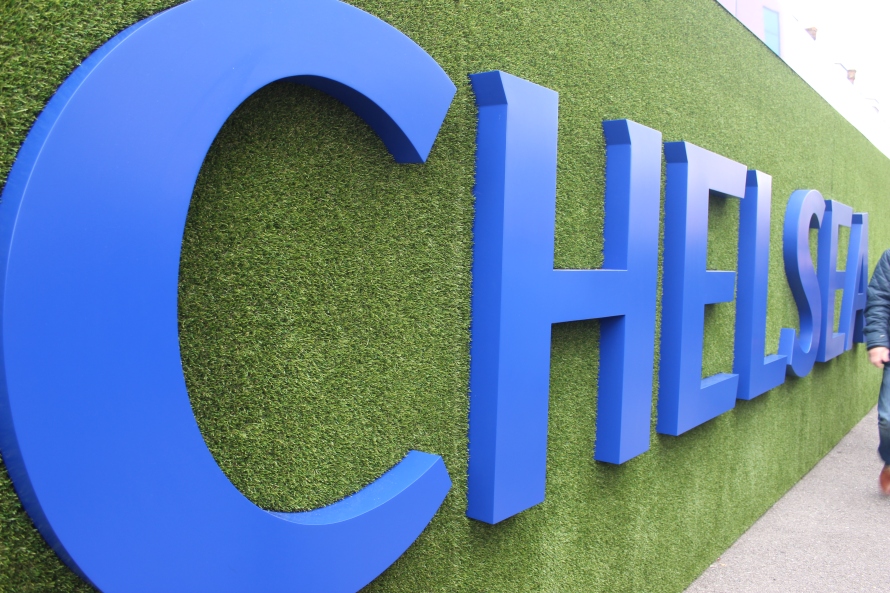 The “Chelsea Wall” has had more transformations recently than David Bowie, Madonna, Frank Maloney and Bruce Jenner combined. It is covered in plastic grass at the moment.

I have no punchline.

Alan, Glenn and I – friends from one of the seminal years of my life, 1984 – were together at Stamford Bridge for the first time since the home opener versus Swansea City. We are all so sad that neither Joe nor Tom, the true pensioners, will be well enough to attend Stamford Bridge alongside us ever again due to ill health. The passage of time. Sigh.

“Unless he is out injured, how must Scott Sinclair feel, if he can’t get into this Villa team. Should have stayed at Swansea.”

Around 1,500 away fans had descended from the Midlands for this one. A couple of flags. We hardly heard from them the whole match. Soon in to the game, the home stands combined with a hearty “Jose Mourinho.” There was a brief wave from the manager.

Arguably our most consistent player this season, it was good for me to see Dave at work in his more natural position during the first half. We began well and Loftus-Cheek came close with an effort. The predicted line-ups were evidently incorrect; it was Fabregas alongside in the defensive two, with Ruben further up-field. This surprised me really. We had all agreed in the pub that Cesc has outstayed his welcome as a holding midfielder.

“Deserves to be dropped before Hazard to be honest.”

After an initial period of play which suggested good things to come, our play deteriorated. A header from John Terry and a free-kick from Zouma did not harm Villa. At the other end, they had a few chances of their own, with Begovic able to thwart any effort on goal. That our opening goal should come from a defensive mistake summed up the paucity of quality in the first-period. Guzan’s poor kick out to Lescot was pounced upon by the willing Willian. His square pass gave Diego Costa an easy tap in.

I was surprised that Mourinho replaced Loftus-Cheek with Matic at the break. The lad had fared well.

Into the second-half. we sang Diego’s name and he waved a quick “thanks.” Soon after, a lofted ball from Cesc found our number nineteen, who took the ball down and after seeing Willian unmarked on the far post, attempted to play him in. From our vantage point, we were both elated but confused when we saw the net ripple.

“How did he score that?”

On seeing the replays, I understood why his celebrations were rather muted. I guess he was almost embarrassed to score a goal such as that. Still, they all count. The support, quiet in the first period, roared for a while, with the loudest “Carefree” heard all season.

“To be honest, apart from that game at West Brom, I’ve not been too impressed with Pedro so far. I know many have struggled.”

“Takes a while to settle in a new league though.”

What of the others? I have to say that Baba looked rather nervous at left-back. Let’s give him time though. Willian fizzed around, closing down where required, and running at his man. Ramires won many a tackle and supplied some energy. It was reassuring to be armed with the threat from Diego again of course.

But Villa, as if I need to say it again, were poor. Very poor. 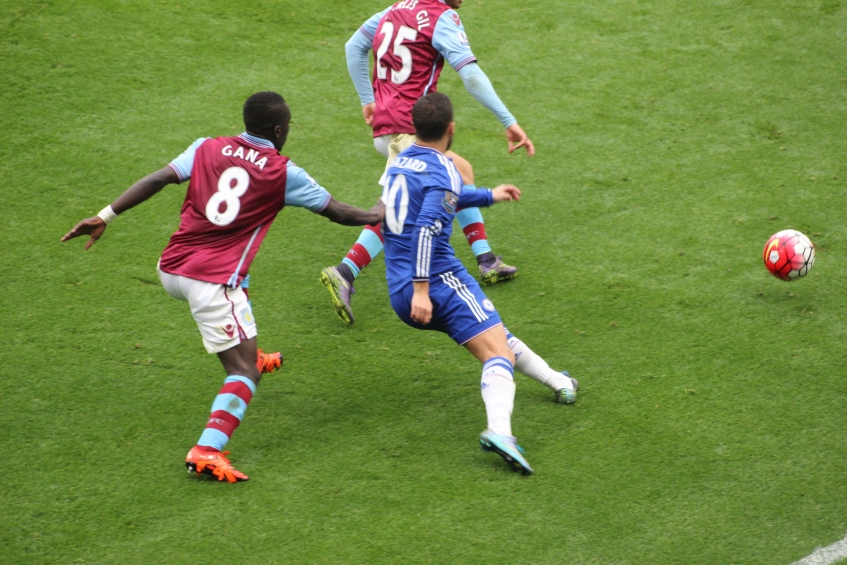 As a late substitute, Eden joined the fray. In the few short minutes that he was on the pitch, I felt that at last I was being entertained for the first time all afternoon.

Let’s be honest, despite the win, it had been an average match at best.

Outside, under Peter Osgood’s boots, I collected a spare ticket for West Ham away. That match – a week away – will be an historic fixture. It will be Chelsea Football Club’s last ever game at Upton Park. And we have got a special trip lined for that one. But first, a Champions League game in Kiev.

No. I’m chickening out.