OK, how many Chelsea supporters muttered, either to themselves or in hushed tones to fellow supporters, these words on Sunday morning?

Come on, admit it. Virtually everyone, right?

My words were spoken early on the drive in to London with my two fellow Away Club members, Lord Parky and P-Diddy. They were in agreement. This would be a tough assignment on a bleak Sunday lunchtime. If truth be told, I had been fearing this trip to our bitterest London rivals for a while. Our struggles so far this season, allied to the form of Tottenham, had been weighing heavily on my mind and now the battle royale – or maybe a battle royal and navy –  was about to take place.

We had parked up at Barons Court station, not so far away from Stamford Bridge, at around 10am and had traversed the capital on a mixture of underground and overground trains. There was a little delay at Seven Sisters as we waited for the last connection. It was a blustery old day. Not particularly cold, but certainly grey and bleak. By the time we had alighted at White Hart Lane station, daubed in graffiti and battle-worn, I was reminded of how the area around Spurs’ home ground is so very different to that around Stamford Bridge. After slowly descending the steep steps from the platform to ground level, we joined the rush of fans on their way to the stadium. I stuffed my hands in the pockets of my lightweight but warm North Face jacket, and quickly walked past some flats, before crossing the High Road. I spotted that the excavations and groundworks for Spurs’ new stadium had hardly advanced from 2012, let alone New Year’s Day 2015. However, now was not the time to wonder how long their new 60,000 stadium would take to rise to the north of the current stadium, nor if Chelsea and Spurs would share Wembley over the next few years. My mind was focussed on the imminent game. We rushed through the checks outside the away end and met up with a few friends in the crowded bar area on the concourse of the upper tier of the away corner, which is squeezed between the West Stand and the Park Lane.

I was with just Lord Parky now. P-Diddy had left us to watch from the lower tier. I gulped down a bottle of lager and Parky did the same with a cider, while reminiscing with a few fellow fans about the recent pilgrimage to Tel Aviv and Haifa. How ironic that fate would have us following up our game in Israel with a game at White Hart Lane, the home of the club which has engineered a strong Jewish identity over the decades.

I met up with Alan, who had been with me in Israel. I shook his hand and gripped it hard. Alan had passed on some very sad news to me late on Friday evening. Our dear friend Tom, who had sat alongside Alan, Glenn and myself in the Matthew Harding since 1997 had passed away in a Tooting hospital ward. I had been so proud of Alan popping in to see Tom after the Norwich City game last Saturday. We will miss his giddy excitement of all things Chelsea. It was an absolute joy to know him, and to share his love of our club, our players, our history. 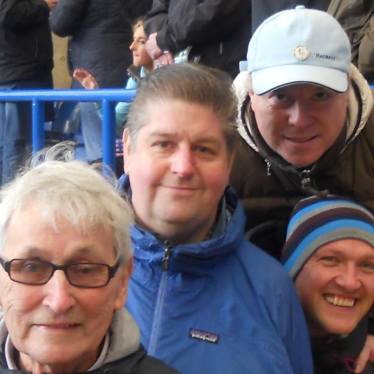 We hoped that Chelsea could provide a win at the home of our great rivals to mark Tom’s passing.

News came through that Jose Mourinho had chosen not to deploy a regular striker, but to instead select Eden Hazard in the quote-unquote “false nine” position. This is something that Chelsea have done on occasion in the past. I can remember Roberto di Matteo doing the same in Turin three years ago, and Mourinho himself doing the same at Old Trafford two years ago.

Of course this threw up a few questions about Diego Costa, specifically, and also Mourinho’s mind-set about the game. I suppose the term “damage limitation” came to my mind. I presumed that we would flood the midfield and close down any space available. Elsewhere there were no surprises. John Terry, sadly, was not fit after his jarring injury in Haifa.

There was only the slightest hint of sun as the game began. It soon disappeared. The grey skies overhead mirrored my thoughts on the game. Tottenham would surely start as favourites. Indeed, the home team – playing with that horrible tyre tread sash over their white shirts – began the better. We had chosen to attack our end in the first-half and it seemed strange. We are so used to see us attacking the Paxton Road in the first halves of games at White Hart Lane. Unlike at Stamford Bridge, there are few individual flags at Tottenham. One new addition was notable on the Paxton Road balcony, referencing former manager Bill Nicholson.

“It’s been my life, Tottenham Hotspur, and I love the club.”

Well, as sporting quotes go, it’s hardly memorable or stirring. One wonders what other quotes from Nicholson were not chosen.

“Come on Tottenham, kick and rush.”

“The goal is over there.”

Tottenham were on the front foot but thankfully Harry Kane, especially, seemed to be misfiring. A rare half-chance for Pedro, just unable to reach a long booted clearance from Asmir, gave us hope. The home fans who shared our end had opened up the game with the slow dirge of “Oh when the Spurs go marching in” but had then been silenced by repeated chants from the noisy three thousand in our corner.

“We’re the only team in London with a European Cup.”

A few of us attempted to get a chant from Tuesday night in Haifa going – “Shalom, shalom, we are the Chelsea boys” – but nobody else were joining in. Instead, the original rang out.

A strong wind was making close control difficult at times. For some reason, several polythene bags had found their way on to the White Hart Lane pitch – the shabbiness outside was mirrored inside – and they swirled around as the players fought out battles nearby. I am sure, at one stage, I saw a carrier bag tackle Harry Kane. A fine cross from Oscar down below us on the right wing was clipped in perfectly towards Eden Hazard, who leapt well, but could not keep his header down. This was promising stuff, though, and after weathering a slight Tottenham storm at the start, we were growing in confidence by the minute. Pedro was the next to threaten Loris in the Spurs goal. He controlled well and worked the ball past his marker and struck a fierce shot which was deflected above the bar.

Tottenham then themselves had the best chance of the game thus far, with Son heading straight at Begovic from close in.

Pedro, full of running down the left, then came close from an angle.

Meanwhile, Tottenham were racking up the yellow cards.

At the break, I was very happy with our first-half performance. Hazard, Pedro and Willian (of course) had been full of energy and running. Matic slowly grew as the game developed, but Fabregas was mainly missing. How ironic that our two lauded signings of the summer of 2014, Fabregas and Costa, are the two most likely to be derided by Chelsea fans in the autumn of 2015. In defence, all was well.

However, I commented to Alan that there was a great disparity in the distribution techniques of our two central defenders. Gary Cahill would often take one too many ponderous touches. Kurt Zouma would rather launch a ball in to row Z. Surely the best approach is of John Terry, somewhere between the two.

The quality decreased a little in the second-half, but Kurt Zouma came close from a Willian free-kick. Our energy levels were fine though, no complaints there. Maybe Tottenham were feeling fatigued after their travels to and from Azaerbaijan on Thursday, but they looked off the pace as the game progressed. The “tonking” that many had expected – our heavy loss on the first day of 2015 was still fresh, surely, in everyone’s memory – had not happened.

Another Tottenham yellow card; up to four now. Matic was booked; our first.

As the match continued, I realised that the home spectators were ridiculously quiet. In almost thirty years of attending Chelsea games at White Hart Lane, this was the quietest that I had ever known them. I suppose that the austere weather and the sobering midday kick-off were the main reasons. However, it left me ruing days of yore when even a mid-table London derby between our two teams would have been thunderous and noisy.

Then, a long searching cross from Ivanovic found the excellent Eden Hazard running at pace on the far post. His sharp volley was goal bound, but Loris managed to deflect the ball up and away. It was our best chance of the second-half. I cannot remember Tottenham having an equally threatening effort on our goal. Jose Mourinho chose, strangely, to leave his two substitutions to very late. Firstly Kenedy replaced Willian. Then Loftus-Cheek replaced Pedro. Both had been excellent.

The game petered out really, in the closing moments, with both managers seemingly content with shared points. With Tottenham’s Clinton and Chelsea’s Kenedy now on the pitch, a draw was a democratic outcome.

We quickly exited and were soon headed south and back to civilisation.

We all agreed that we had played well. It had been a fine, bustling performance, and was possibly our best show of the season. We left London with a little unbeaten run intact, and three consecutive clean sheets. However, we have a tough month ahead with five league games on the horizon, including two difficult aways at Leicester City and Manchester United, plus a possible season-defining game against Porto in Europe. In this season of false starts, and now false nines, let’s hope that by the last day of 2015, we have continued our resurgence. 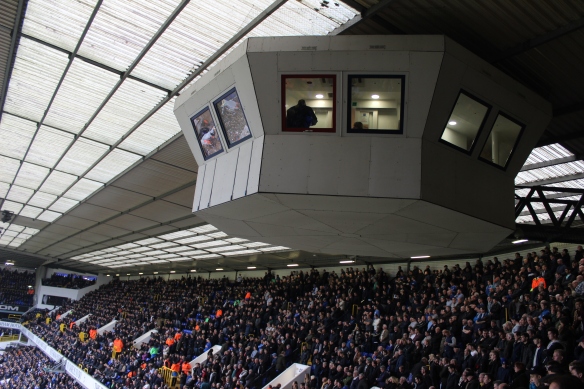