This was going to be Frank Lampard Day at Stamford Bridge. The club had announced that our magnificent midfielder – arguably our finest ever player – would be making an appearance at half-time during our match with Swansea City. There would be a celebratory programme too. It promised to be quite a day. I can well remember his last-ever appearance as a player at Stamford Bridge, in the colours of Manchester City, when he cut such a lonely figure on the pitch at the end of a game in January 2015. He looked desolate. Heartbroken. It would be fantastic to see him once again.

In “The Famous Three Kings” pub at West Kensington, a few of us were remembering another Frank. We had learned on Friday that one of our match-going crew had passed away the previous day. I first met Frank Portingale, a local builder from my town of Frome in Somerset, in the autumn of 1993 when I drove a few of the lads up to a Chelsea vs. Arsenal game. The next time that I remember seeing him was outside Wembley with PD in 1994. He loved his days out at Chelsea and he started going more regularly. From around 1996 to 2007, Frank was one of the gang, and we would take it in turns to drive up from Somerset. For a few years, we took two cars up from Frome. We were a solid bunch; Karen, Dave, Brian, Frank, Glenn, PD and myself. Frank came with us to Stuttgart in 2004 and Barcelona in 2005. He was at Bolton in April 2005 when the other Frank scored a brace to give us our first league championship in fifty years.

During that 2004/2005 campaign, Frank was there for the first and last games; a pre-season friendly at Oxford United’s Kassam Stadium, which coincided with Jose Mourinho’s first game in charge of the team, and a league game at St. James’ Park in Newcastle. These were stunning times to be a Chelsea supporter. It seemed like we were treading alien territory during that era; league titles and a real chance of Champions League glory seemed the stuff of dreams, but we were right in the mix. Heady stuff indeed. In between, there were many others of course. A game alongside the Thames at Fulham, and those games at the Reebok and Camp Nou. And Frank loved it all. The camaraderie, the beers and the laughs. 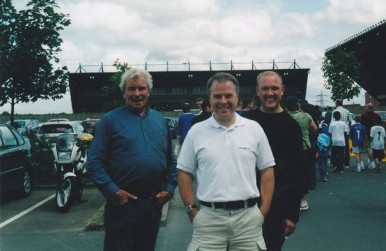 And there were many laughs with Frank. He would often bring up “Somerset Pasties” from a local Frome butcher for the lads at Chelsea. On that memorable trip to Barcelona, such was his desire to keep them secure, he locked some of his pasties in the hotel room safe. We all had a chuckle at that. Frank gave up his season ticket a few years back – he used to sit along from us in the Matthew Harding Upper – and it was with sadness that we all learned of his passing. He was generous to a fault, bless him, and I remember that he bought us all gold Chelsea rings after a game in 2004. A few years later, Frank built the front porch on my house and I guess there will always be a part of him in my life. Indeed, Frank will always play a role in our collective Chelsea memories.

Parky, PD, Glenn and myself raised our glasses.

Thoughts slowly turned to the game.

Our little band of brothers have often questioned the desire of managers to play two essentially defensive-minded players at home games against lesser teams. On this occasion, Antonio had decided to relax things a little, pairing N’Golo with Cesc, and Nemanja dropping to the bench. Cesc has delighted us this season with his place in the squad enabling him to dip in and dip out of our line-up, but without complaint. Swansea City would be quite a test for us though; their form had improved over recent weeks. Elsewhere, the team picked itself.

With former Chelsea coach Paul Clement now in charge of the visitors – with midfield legend Claude Makelele alongside him – and with former midfielder Jack Cork playing for Swansea too, this was very much a day of reunions in SW6. It was apt that the visit of the Swans coincided with this day of praise for Frank Lampard since he played a handful of games at the old Vetch Field in 1995/1996.

It was an overcast day in London and rain was not far away. Swansea were ably supported by a full three thousand Jacks. A fine turnout in my book; OK, the city of Swansea is not too far away, but they are not known for their large travelling support.

Alan and myself wondered about the intensity that would be given to this one. Swansea were a team that we ought to beat easily. But we were sure that Antonio would fire the team up. It’s all about the league and there are just thirteen games left. It is all about the focus at this stage of the season. For once, I am not missing European football. Whatever will be will be in the FA Cup too. In fact, PD and myself boldly admitted in the car that neither of us would be devastated should we exit that competition at the next stage. Of course we want to beat United, but the league seems all important.

We admitted that the double is certainly “on” though. Heady days again in SW6? Maybe. Just maybe.

We were bright in the opening exchanges. Pedro fired over the bar at The Shed End. Swansea seemed competent in moving the ball around but rarely threatened Thibaut at the Matthew Harding. In the middle of all of our creative scheming was the recalled Cesc, who has such a fine touch and an acute eye for a killer pass. Very soon he was picking out the runs of Diego and Eden. I was certainly impressed with our charging down of space, and our desire to get the “second ball.” Again, N’Golo seemed to be everywhere. We were enjoying another lovely game from him; I wonder if Claude was looking on longingly, despite his new affiliation. Once or twice, N’Golo lofted a sublime pass out to the waiting wings.

Claude : “Sigh. I wish I could have done that.”

On nineteen minutes, Eden initiated another move. In all honesty, it was a loose pass in to Diego who had to battle with a Swans defender. Thankfully, the ball was pushed out to Pedro on the right. He picked out the run of Cesc and the ball was bundled in, almost apologetically past the former Gooner Fabianski.

Soon after, Fabianski made a superb reflex save from a Cesc volley. It really was sensational. Victor was stretching the game out and occasionally asked questions of the Swans defence. Eden was a little quiet. Pedro buzzed as Pedro does. We were totally dominating. N’Golo was in fine form. The boys were hunting in packs all over the Swansea midfield. In an attempt to avoid boredom, Thibaut hopped up on to the crossbar down below us and went through a fine gymnastic display – a handstand here, a somersault, then a fine tumble and dismount.

Then, after it was announced that a minute would be added on to the first-half for stoppages, N’Golo was wrongly – in my book, but I’m biased – adjudged to have fouled in the centre-circle. From Sigurdsson’s perfectly placed free-kick, Llorente – thinly linked with us last month – was able to jump unhindered past Thibaut. What poor marking.

The half-time whistle sounded and, for once, there was not a mass exodus. This half-time show would rival anything that the NFL could muster. The Frank Lampard banner was held aloft by around twenty supporters in the middle of the pitch. After a fair wait, Neil Barnett introduced our Frank  to the waiting thousands. Dressed in a dapper black suit – brown shoes – he began a walk around the sacred turf. There was tumultuous applause, as expected.

After completing a circuit, Frank took the microphone from Neil and slowly walked, hand in pocket, looking very relaxed, towards us in the Matthew Harding. I felt privileged that he walked towards us; it was, after all, where he had his most emotional moment at Stamford Bridge. That penalty against Liverpool in 2008 will never be forgotten.

Frank spoke for around a minute, and thanked the club for allowing him this chance to say a few words. He thanked us repeatedly for all of our support. There was a brief moment when his bottom lip momentarily wavered and I am sure that the penalty in 2008 flitted through his mind. It was another emotional occasion to be honest. But Frank battled on and did well. It was another perfect Chelsea moment.

The second-half began. Eden blasted at Fabianski. Just after Diego set up Cesc, whose rising shot struck the bar with a loud thud. Surely a goal would come. But the visitors were providing dogged resistance. I missed the Dave “handball” and was not convinced that the Diego incident warranted a penalty either.

It seemed to be all Chelsea at this stage. I was convinced that we would get a winner, though. There is an innate confidence in the team this season. It’s a beautiful thing. With around twenty minutes’ left, Cesc played the ball to Pedro, who was allowed to run. He struck a tentative shot from around twenty-five yards, and I watched as it curled in at the far post.

Here was the goal we craved. Stamford Bridge erupted.

Pedro ran off and celebrated wildly with Cesc. Fantastic.

The main Swansea threat Sigurdsson forced Thibaut to save well from a free-kick. There was a moment of lazy and loose football – involving David and Gary – as the defence took a few sloppy touches. That it warrants a mention in this match reports just shows how rare these occasions are. Antonio surprisingly replaced Pedro with Nemanja, who quickly ran deep in to the Swansea box. His pull back to N’Golo was excellent. The finish was not so great; it was blasted over.

Soon after, Eden took his turn in dancing down the left and pulled the ball back for Diego to slam home. Diego had to adjust on his approach to the ball and it was a fine finish. Diego made a point of signalling over to Eden for pulling the ball back and the two hugged. The rest of the team soon joined in. In the resultant melee, Dave hoisted himself  onto his team mates. Smiles all over. The game was surely over and the three points had been won. Antonio brought on Kurt for Victor and Willian for Eden. Cesc went close at the end, but it stayed at 3-1.

It was another fine Chelsea win.

I turned to Alan :

“That one is for Frank.”

16 thoughts on “Tales From Two Franks And The Jacks”