Expectations were high. Although we knew that Watford were quickly evolving into a pretty decent team under the tutelage of Marco Silva, the first of three very “winnable” games in eight days had us all dreaming of three points. Watford at home, Everton at home, Bournemouth away. Three wins, six points, consolidation in the top four, and into the last eight of the League Cup? We really hoped so.

Due to the game kicking-off at the early – and disliked – time of 12.30pm, there was a very truncated pre-match in the rarely-visited “The Cock Tavern” at the bottom end of the North End Road. The place was well-packed. It is an important pub at Chelsea for me; it is the boozer where I had my very first pint at Chelsea, when it was known as “The Cock”, on the day of the 1984 promotion-decider with Leeds United. A couple of lager and limes if memory serves. How ‘eighties.  I was aware that it was the first time, I am sure, that I had visited the pub with PD since that particular day.

“Over thirty-three years ago, mate.”

I remember the place absolutely rocking that Saturday lunchtime. The song of the moment, more so than now, was “One Man Went To Mow” and I remember us all standing on the sofas at “ten.” I had travelled up from Somerset with four other lads. I have season tickets with two of those chaps. I see a third every month or so. It’s wonderful how we have all stuck together over the seasons. Brilliant memories. May they stay strong.

The four of us quickly quaffed some early afternoon drinks and made our way to the stadium. We were in early.

The team was a familiar one, though I have a feeling that the presence of Gary Cahill will have upset many.

Such is the way of my world these days that it soon became apparent that I was able to reel off Watford’s players from the early ‘eighties (Steve Sherwood, Kenny Jacket, Wilf Rostron, Steve Sims, Nigel Callaghan, Luther Blissett, Ross Jenkins, John Barnes…) than the current team. In 1982/83, Watford finished behind only Liverpool, ahead of all other teams, including the big-hitters of London. It was a mini-miracle to be honest, and probably the finest finish from a small club since Leicester City came along in 2016.

I expected to see Watford in the yellow and black of that period. That they showed up at Chelsea wearing all red is typical of modern football.

There were a few empty seats around Stamford Bridge. Watford had the higher three-thousand allocation.

I wasn’t expecting a barrage of noise, what with reduced drinking times and the opposition.

The first thing that I noted was that Gary Cahill seemed to start in the middle of the back three, which surprised me, but David Luiz soon moved in from the left. Alvaro Morata was very neat in the first few minutes, adeptly bringing the ball under his command, and laying if off to others with the minimum of fuss. One instant turn and long ball out to the left wing was worth the admission money alone.

The crowd quickly showed support of the manager.

Despite the hiccups of late, we are – obviously – with him.

After twelve minutes, a corner was awarded to us when it certainly looked like Eden Hazard had the last touch. Fabregas played a short corner – usually the bane of my life – to Hazard, who rolled the ball to Pedro. His first time effort curled high over everyone, wildly so, and struck the far post before crossing the line. It was a magnificent opportunist strike. We roared, and watched as Pedro raced over to Parkyville. The effervescent scorer was quickly surrounded by his team mates. It was a perfect start. 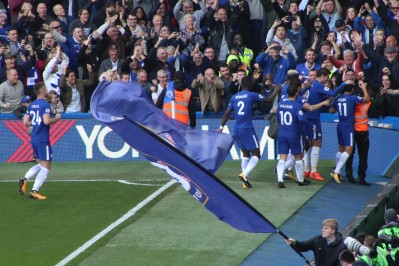 Not long after, that man Morata picked out Fabregas, who probably had too much time. He slowed, and decided to try to dink a delicate lob over the Watford ‘keeper Gomes. The derided former-Spurs player stood up to the challenge and saved easily.

Watford’s fans were soon goading us.

“Is this a library?”

I could not disagree.

Our advantage continued and Pedro smacked a low drive past Gomes’ far post. A Luiz shot from distance was straight at the ‘keeper. But then we eased off a little. Watford managed to get themselves back in to the game. Courtois seemed to move late but was able to punch out a firm free-kick from Tom Cleverley. Watford dominated for a while. Our play seemed to lack direction and intent. On the half hour there was a flurry of Watford shots. Pedro was our standout player, with his usual movement and enthusiasm, plus some crisp passing. Everyone else seemed to dip.

We seemed to want to play the early ball for a change, but only rarely did it cause Watford much distress.

A corner was met on the volley by David Luiz, but his body shape was completely wrong. He side-footed it towards Henry Forbes-Fortesque and his son Jonty in row seven of the Shed Upper, resplendent in matching Watford shirts. It knocked them sideways. They were bloody livid.

Just before half-time, a long throw was headed out by David Luiz, but the ball took an unfortunate deflection off Bakayoko – my “good header” exclamation was sadly premature – and Doucoure blasted in at the near post. He could not have hit it sweeter, spinning away from Thibaut’s dive.

The Forbes-Fortescues were up on their feet.

The Chelsea support groaned. It was certainly a crushing blow. Over the course of the first forty-five minutes, Chelsea had enjoyed spells of dominance but the visitors had little periods of fine play too. It had been an odd half. It was like a curate’s egg. We hoped that Antonio Conte would inspire the boys during the break.

In the opening few minutes of the second-half, Pedro had a fine run and his drive from outside the box was narrowly wide. Morata squandered a chance from six yards. These two chances were a false dawn.

We then went to pieces. Watford broke with pace down our left and Femenia crossed and we watched, open mouthed, as Richarlison met the ball with the goal at his mercy. The Chelsea defenders were nowhere to be seen. Incredibly, his effort was poked wide. Just after, Richasrlison seemed to drag our complete defence out of position, so that when his ball into the box was met by Pereya, no Chelsea players were located within the same post code area. I rolled my eyes to the skies. I brought them down to see the net ripple.

A brief “COME ON CHELSEA” suggested that the crowd would react to this calamity, but no.

It got worse. Britos crossed, only for Richarlison to head down but past Courtois’ charmed goal.

For fifteen minutes or so – believe me it seemed longer – our play was simply rotten. The defence, as described, were at sixes and sevens, and probably eights and nines too. In that period, even the previously impressive Rudiger and Bakayoko were shadows of their former selves. How we missed the human metronome Kante. Cahill was the usual mixture of brave challenges and nervy distribution. Fabregas was quiet. Hazard too.

And Stamford Bridge was like a morgue, as bereft of noise as I can ever remember. There was just no reaction from the home supporters at all. At least there were no boos, but none were expected. A repeat of the severe “you don’t know what you’re doing” which was a chant aimed at Villas-Boas and Benitez among others in our recent history, was never likely to happen. There is too much love for Conte, too much goodwill, and too much trust, for that.

But when Alan turned to me and, noting Conte’s body language – hands in pockets, shoulders a little slumped, not so many animated gestures – he wondered if the manager had given up. So, that depressed me further. The black dog, if not vultures overhead, had momentarily returned. How I wanted the supporters to get behind the team. It was a horrible few minutes.

Morata was substituted by Michy Batshuayi, and we thought back to his less than stellar showing at Selhurst Park. The portents were not great. Another chance for the impressive visitors came and went. Soon after, Willian replaced Alonso. I thought that we changed to four at the back, but I did not have much time to dwell on it. Thank heavens our play improved.

On seventy minutes, Willian pushed the ball out to Pedro in some space. His cross – right on the money – was perfect for Batshuayi to barge past a couple of defenders and to rise unhindered. He steered the ball past Gomes with a flick of the neck. We were back in it. 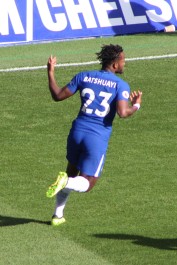 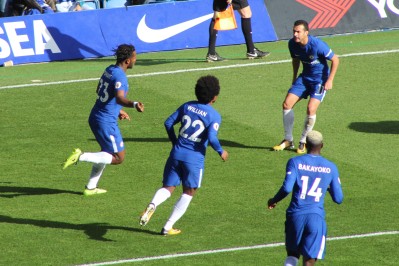 Conte was more animated now. We all were.

Michy curled a low shot just past the far post. He then blasted over from inside the box after an innovative free-kick from Fabegas. The noise thankfully increased. We had found our voices at last.

But Watford still threatened as the game opened-up further.

Zappacosta replaced Pedro at right-back. His first touch, a cross, was sublime.

With just three minutes remaining, a shake of the hips from the mercurial Willian on the right allowed him space to cross. The ball was whipped in and Michy shaped to head home, but the ball took the slightest of deflections. Of all people, Dave was immediately in line to head home.

With my body boiling over, I needed to focus. I don’t honestly know how I did it but I managed to snap Dave’s run towards us, the smile wide, the eyes popping, the point at the badge, the leap, the euphoria, the joy.

What a fucking player. 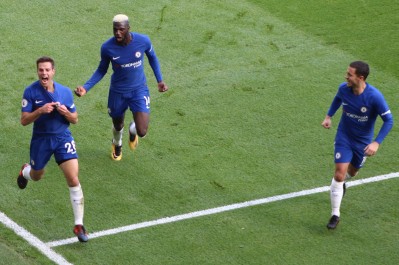 What a moment. He was lost in a mosh pit of emotion down below me, engulfed by players and fans alike.

It’s very likely that the manager jumped so high that he was able to pat George Hilsdon on the head.

After the chaos had subsided, I stood and leaned on the barrier adjacent to my seat. I was quiet and still for a few moments. I wallowed in the sweetness of the moment. My emotion got the better of me and it quite honestly surprised me. There were no tears – not for Watford – but I was pretty close to it. It’s mad, quite mad, how football can take me to another place.

As I have said once or twice before, I fucking love this club.

Lo and behold, deep into the five minutes of extra time, Bakayoko lobbed the ball forward after a Watford clearance went awry, and Michy was strong enough to hold off a strong challenge and slot the ball past Gomes. It was a very fine goal. What an enigma, this Michy.

More celebrations. More smiles. Everyone happy. A wild swagger from Batshuayi as he trotted over to the East Lower. 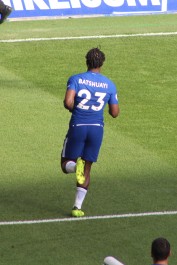 The game was safe. 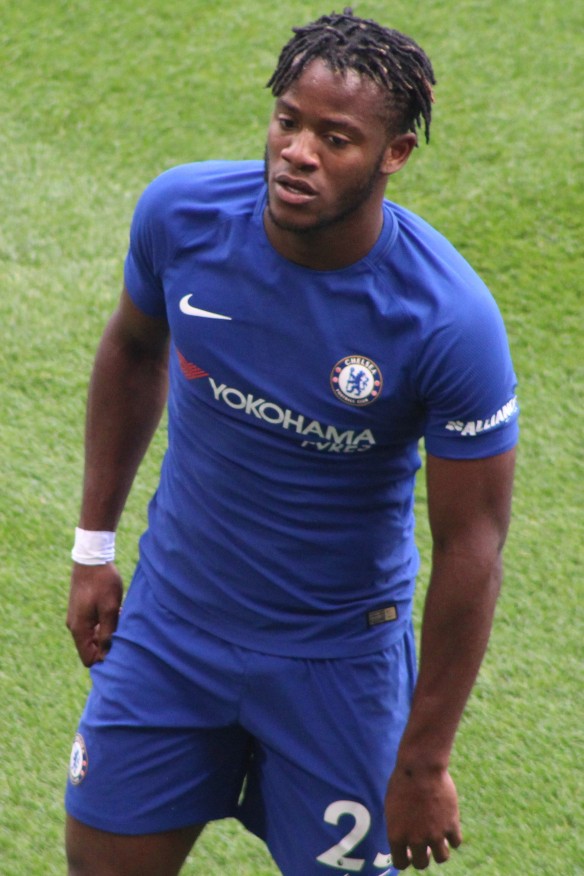