In the tight area underneath the Matthew Harding Upper I bumped into a friend, Ollie, who comes over to a few Chelsea games every season from his home in France. The last time I saw him was in “The Arkles” outside Anfield last January. We shared a few words, he took a selfie of the two of us, and I thanked him for being one of the eighty or so people from around the globe who have taken the plunge and subscribed to these match reports. I apologised for occasionally being rather self-indulgent, knowing full well that I would again be doing so for this Newcastle United one.

As I have mentioned more than once, a Chelsea vs. Newcastle United game is always very special to me. The Geordies were the opponents for my very first Chelsea game way back in March 1974. And the sight of those famous black and white stripes appearing at Stamford Bridge always stirs my emotions. The Chelsea vs. Newcastle United game on Saturday 2 December 2017 was my 1,166th Chelsea match, but I have to say that the memories of game number one over forty-three years ago are still remarkably clear.

The drive up to London with my parents. Stopping off at Gunnersbury Park off the North Circular for a packed-lunch (I have a feeling that cheese and pickle sandwiches were inevitably involved). Catching the tube from the art deco styled Park Royal station in West London. The crowds at Earl’s Court tube station. The climb up the steps to reach the top of the West Stand. The match programme. The first view of the Stamford Bridge pitch. The Shed End and the blue and white scarves twirling. The East Stand, opposite, all exposed concrete and yet to open. The three Newcastle United fans in front of us in the West Stand Benches complete with black and white scarves. The substitute being announced as Ken Swain, and my immediate embarrassment of not having heard of him. Ian Hutchinson’s leap to head us into the lead. A “Topic” at half-time. Gary Locke carrying out sliding tackle after sliding tackle in front of us in the second-half. The appearance of Ken Swain as substitute. The joy of a Chelsea win. The slow walk up to the top of the West Stand at the end of the game and a look back, hoping that I would soon return. The “Chelsea The Blues” scarf that my mother bought me from one of those souvenir huts behind the West Stand. The treat of a hamburger and chips at the long gone “Wimpy” on Fulham Broadway before catching the tube back to Park Royal.

I remember so much. But more than anything, I can remember exactly what it felt like.

Those feelings are difficult to describe, but it always amazes me that for a few brief seconds, I am often sent whirring back in time to a Saturday afternoon of my childhood – I was eight, almost nine – and the power of recollection scares me.

Chants, laughter, grizzled old Londoners, shouts of the crowd, royal blue everywhere, the surrounding buildings, the large terraces, the dog track, the sense of place and the sense of belonging.

They say you never forget your first time, eh?

Since that very first game, Newcastle United have appeared as regular as clockwork in my Chelsea story. I have been present at the previous twenty-four league visits of the Geordies to Stamford Bridge dating back to the 1986/87 season. There is just something about them; it is as if I make a special effort for them, even in the days of when I only attended ten to twenty games each season.

And – oh boy – we have certainly enjoyed some hugely enjoyable games against them over the years.

However, knowing full well that Newcastle United were relegated two seasons ago, added to the fact that I don’t tend to watch much football at all on TV these days, I knew only too well that many of the visiting players would be virtually new to me. The problem is that many of Newcastle United’s current players come from foreign lands. If they were all from the British Isles, then I sense that I would be able to tie them to former teams in England, or to geographical regions. I think this is how my mind works, and how I manage to remember various players.

There are two easy examples.

Dwight Gayle, a late-developer, ex-Palace, went to Newcastle a couple of seasons ago.

I’ve heard of Mbemba and Mitrovic but not many others. I guess a whole season of them playing in the division below has not helped.

For comparison, I thought back to those players from March 1974.

The difference is as clear as black and white.

Off the top of my head, this is what I can remember of their players –

It is unlikely, I think, that I will be able to remember as much depth about the current crop in years to come.

Due to the closure of the North End Road, I was forced to drive further east and then head down past Earls Court, where we noticed a few hundred Geordies at The Courtfield pub opposite the tube station. Due to the tiresome 12.30pm kick-off, the pre-match was as brief as I can remember; a single pint of “Peroni” in “The Atlas” with PD and Parky, plus Kev, Gillian and Rich from Edinburgh.

Inside Stamford Bridge, there were – as expected – a full three thousand Geordies, though only three flags.

There were a few empty seats dotted around.

Above The Shed End, a large mural of sixty supporters’ club banners appeared against Swansea City last Wednesday, though I was only now able to take a worthwhile photograph.

Our team? Antonio juggled things a little, deciding to start Victor Moses on the right, while the rested Eden Hazard and Cesar Azpilicueta both returned. Danny Drinkwater played instead of Tiemoue Bakayoko. No place for the captain Cahill, nor the out-of-favour David Luiz.

On the far touchline, Rafa Benitez appeared back at Stamford Bridge for the first time since the divisive 2012/13 campaign. I hoped that there would not be much volume to the inevitable, and dull, “We Don’t Care About Rafa” chants which could well develop over the next hour and a half.

There is no doubt that the away team – players and fans – began the brightest. The three-thousand were soon into it.

“We are the Geordies. The Geordie boot boys.

Oh we are mental and we are mad.

We are the loyalist football supporters.

The world has ever had.”

However, we enjoyed a few passages of play and threatened at The Shed End. A lovely chest-pass from Eden to Morata – “reunited and it feels so good” – but a blast over.

After twelve minutes, Andreas Christensen was out-muscled to a high ball. Marcos Alonso’s pass back to Thibaut was pounced upon by a Newcastle player – Murphy, who? – and although our ‘keeper did well to block, the ball ran invitingly to Dwight Gayle who slotted home. I noted that the goal scorer hardly celebrated.

The Geordies were not so reticent.

There was a period of nervousness as the home crowd grew agitated with some jittery back-passes and clearances. Thankfully, our play soon improved. The home fans responded too. Very often we need to go a goal behind for our support to be stirred. I was so pleased. A magnificent lofted pass from Cesc Fabregas – almost playing the vaunted quarterback role of the Beckham era – was brilliantly controlled by Hazard, but his dink was well-saved by Darlow (who?). 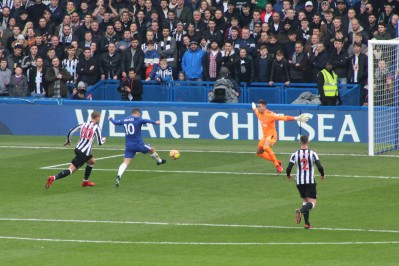 We were stretching the Geordie defence at will and enjoyed a flurry of corners. Christensen, with a header, went close. On twenty-one minutes, a cross from Dave was aimed at the head of Morata. A Newcastle defender cleared, but the ball fell invitingly to Hazard, thankfully following up. His shot was hit towards the goal, and it bounced up and over the orange-clad goalkeeper.

We were back in it.

Our play improved, the noise improved. This was slowly evolving into a fine game of football, with Chelsea starting to dominate. Moses was always active down the right. This was a good reaction.

On thirty-two minutes, I rose from seat 369 and shot off to turn my bike around.

On thirty-three minutes, I heard a huge roar.

I don’t miss many.

On the PA – “and the scorer for Chelsea…Alvaro Morata.”

Alan : “They’ll have to come at worselves now, like.”

Our dominance continued. We played some lovely stuff. Eden was a complete joy to watch.

The ball was touched out of play and Rafa Benitez, looking frustrated, took a huge swipe at the ball. He sliced it and how we laughed.

At half-time, we were warmed by the appearance of Sir Bobby Tambling.

As he walked past the away fans, Neil made a note that the Geordies were applauding.

This was met with some muted applause from the Matthew Harding.

Andreas Christensen had us all purring when he went on a long dribble, before playing a perfectly-weighted ball to Victor Moses, just beating the off-side trap, but the cross just evaded Morata. I was impressed with Moses, who was often involved on the right. Kante and Drinkwater were playing well, Fabregas too. The star, though, was Eden, who was simply mesmerizing. He continually teased the Newcastle defence. He went close a few times. Morata seemed happy to have Eden alongside him, though on more than one occasion I just wished that he had a greater desire to stay on his feet.

On seventy-three minutes, a clinical ball from Fabregas found Moses. He pushed the ball on, but was taken out by Ritchie – who? – and the referee pointed towards the spot.

By this stage, we noted that Morata seemed exhausted, hardly testing his marker, barely walking. I was amazed that he stayed on. Instead, Conte chose to rest his star player ahead of the Atletico Madrid game on Tuesday, and it was Eden who was replaced by Willian. Bakayoko then replaced Fabregas. Cahill replaced Christensen.

I had to admire the away fans. They won a late corner and celebrated like it was an equaliser.

I wondered if those three Geordies from 1974 – in their ‘seventies now, no doubt – were in among them.

This was a great Chelsea win. After the away team’s initial period of dominance, we had soon extinguished their fire. Following the triumph against Swansea City, we had won our second successive league game. I want us to go on another winning streak over Christmas. Let’s see how far we can go.

Poor old Newcastle. They rarely profit from a trip to Stamford Bridge.

Those last consecutive 25 league games at Stamford Bridge make painful reading for the boys from the Tyne.

Following on from Wednesday’s tiresome trip home, we were caught in another jam, along the Fulham Palace Road, caused by the closure on the North End Road. After an hour of stagnant movement, at last we cleared the congestion and shot past the floodlights of Griffin Park as Brentford played out a local derby against Fulham.

On the radio, we listened in as Spurs dropped further points at Watford, while the FA Cup also got us thinking about potential opponents in Round Three.