On Tuesday night, we had walked the seemingly deserted streets outside Stamford Bridge while the Atletico game was nearing completion. We had needed to leave the stadium early to avoid traffic congestion on the M4. As I reported, it was a deeply surreal sensation.

While the first quarter of an hour of the West Ham away game was taking place at the London Stadium at Stratford, we were walking alone outside once again. Despite my best laid plans, which involved leaving home at 7.30am, we sadly managed to get ensnared for over an hour or so in a tedious traffic jam caused by the closure of the M4 motorway between Newbury and Theale.

Nobody was more annoyed than me. At the end of a week in which I had continued in a new job role at work (UK transport planning for our fleet of vehicles, rather than my fourteen years of exports), it was a particularly damning moment.

As we had edged along the alternative A4 – a main trunk road which travels along the course of an old Roman road linking Bristol and London – my frustration grew. At around 10.40am, I eventually re-joined the M4. Like PD on his return home on Tuesday night, I then broke the land speed record and I reached our parking spot at Barons Court at just before 11.30am.

We were then in the hands of London Transport.

What was I saying a few weeks ago about travel documentaries, books and blogs adding some sort of logistical conflict for dramatic effect?

I texted Alan to know that we would be late.

We had seen the team that Antonio had chosen.

There was one change of personnel; Alonso for Moses, though not a simple straight swap.

We were wrapped up for the cold air of a crisp London day. Overhead, the sky was a clear blue. As we stepped off the train and down the steps at our final station, with the stadium visible in the distance, five or six youngsters flew past us.

We walked on, through a darkened tunnel – very “Clockwork Orange” – and then out, with the stadium now in clear view. 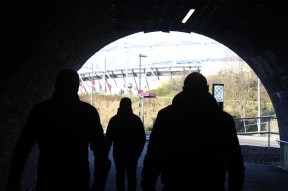 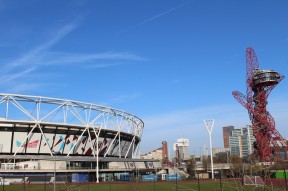 We clambered down a grassy bank, falling and sliding, then made our way up to the away turnstiles. We could hear the Chelsea fans in good voice. I enquired of a young steward :

I soon found my place alongside Gary and Alan, and Parky soon arrived too. I looked up at the stadium clock. Eighteen minutes had passed. I remembered back to our visit to the old Upton Park in March 2015; a similar amount of time had passed before we eventually got in. On that occasion, the tube had caused the delays. Memorably, just as I reached my seat, we scored thanks to Eden Hazard.

Gary quickly updated me, as he had done in 2015. We had been very poor, hardly creating a chance. The ex-Stoke City forward Marko Arnautovic had scored their goal, bursting into the penalty box, and firing past Thibaut Courtois.

Despite their team winning against the champions, the home fans seemed reluctant to make much noise. The first song that I heard from our supporters – split in two sections, in two tiers, separated by a gap of twenty yards or so – was aimed at the home crowd :

“You sold your soul for this shit-hole.”

But there simply was not a great deal of noise from either section. Everything was pretty sterile. The West Ham stadium is not liked by many. It is simply a horrible place to watch football. I thought back to the stadium in Baku – with the pitch just as far away from the fans remember – and it certainly seemed much more likable. Those stands were steep and dramatic. The overall design worked. However, this former Olympic Stadium from 2012 is bland, the stands are quite shallow, there is no “wow” factor. I have no doubt these aspects affected the lack of noise.

The game continued with the four Chuckle Brothers in attendance.

The annoying and irritating “from Stamford Bridge to Upton Park” version of our song was aired.

I thought that where Cesc Fabregas and Tiemoue Bakayoko – especially Bakayoko – struggled to impose themselves on the game, N’Golo Kante was everywhere in that first period. He broke up attacks. He pushed on by himself. He played in balls to the wide men. He raced on to collect passes. There was a shot from him too, and this was a very rare event in the first-half.

But Bakayoko. Oh boy. Those who know me will vouch for the fact that I hate to pick on players, young players especially, those in their first season even more so, but the lad was so poor. Yet again the phrase “the game passed him by” sums it all up. He was adrift of the play on so many occasions.

Alvaro Morata did not seem “up” for the physical battle. When we had the ball deep in midfield, there was a stunning lack of movement from Morata and Hazard. Both wing-backs seemed to struggle to get past their markers. A minor plus point was the continued form of Andreas Christensen, our best defender.

There were moans at half-time, as expected.

Antonio brought on Pedro for Bakayoko at the break, and I hoped for some extra pace and urgency. We reacted reasonably well as the half got under way. A cross from the right, down below us, resulted in a diving header from Cesc – goal bound – but it was blocked by a West Ham defender. A strike from Zappacosta zipped past the far post. The Chelsea crowd sporadically tried to get behind the team but with the support being split, this proved impossible.

The manager then brought on Victor Moses for Alonso. There was a reprise for Zappacosta’s right-back role from Tuesday.

However, all around me, fellow fans were getting increasingly frustrated.

Eden Hazard attempted his fifth back-flick of the game.

I wanted Moses to show some of his old fight, some of his bullishness. I did not want him to be reckless, but I wanted to see some danger from him.

Sadly, whereas I wanted him to be like a bull in a china shop, all I got was a vegan in a butcher’s shop.

Only once or twice did he decide to take on his marker, instead doubling back on himself, and nursing the ball back whence it came. He simply was not a threat down our right.

Pedro, on the other hand, probing down the left flank at least managed to get the occasional cross in. However, Morata was not picked out too often. We were firing blanks into the box.

Willian was brought on in place of Zappacosta.

On the rare – and I mean rare – occasions that West Ham played the ball out, both Christensen and Azpilicueta defended well. Cahill had a few scary moments, as is his wont. But West Ham rarely got out of their half.

I kept assuring Gary that we would equalise, but the clock ticked by.

Fabregas was awry with both his passing and his shooting. In that second-half, despite dominating play, all of our shots were off target.

The mood among the away loyalists worsened.

A Christensen volley from a corner was blocked by a West Ham defender. There is no doubt that space was at an absolute minimum in the second-half. West Ham defended like their lives depended on it. But they had a huge scalp here, the current champions. It is no surprise that they fought for every ball. But it was gut-wrenching to see the lack of desire in our play.

It was painful to watch as we overplayed it.

With about ten minutes’ left, the best chance of the entire afternoon fell to the trusted boot of Alvaro Morata, picked out by a fine chip by Kante, but the Spaniard skewed it wide of the near post.

The away end was apoplectic.

We pleaded for more shots on goal, but when wayward efforts from Hazard and then Fabregas – again – missed the target, we were overcome with the grim realisation that this was not our day.

Many began leaving with ten minutes to go. With five extra minutes signalled by the assistant linesman, the exodus continued.

At the final whistle, the hurt of a fourth league defeat, and with it, the acknowledgement that the league championship win of 2016/2017 would not be followed by a defence of the title.

Comments on the long drive home.

“You have to admit that although we were pretty awful today, our second-half chances really ought to have given us an equaliser.”

“Drinkwater would have loved it out there today.”

“Moses offered nothing when he came on.”

“Can’t honestly remember a single crunching tackle from us the entire bloody game.”

“Morata needs to toughen up.”

“There was no space. It is so difficult to break a team down with eleven men behind the ball.”

“We’ll do well to finish second this season. I have been saying that for a while.”

“It’s almost seems as if this is Conte’s first season with us. Last season was a dream. We caught everyone out. It now seems that Conte has to work through his team selections, his formations, his players, his ideas – just as if this is his inaugural season.”

“Conte on the radio blaming the tiredness of his players, but that’s just a smokescreen.”

Personally, I thought that Conte’s quiet and considered opinions hid a lot of frustration and hurt. But I like him a lot. And I trust him to get it right. It might take a while, but I am not going anywhere.

I am in it for the long haul. 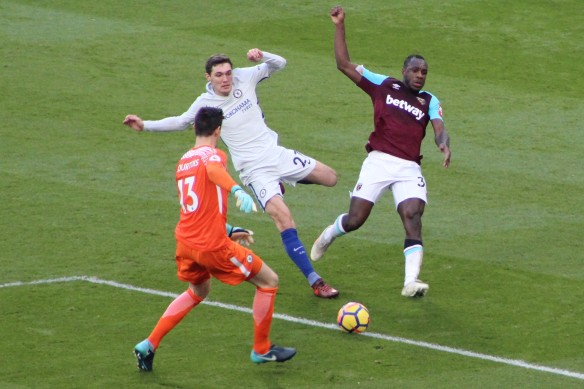 1 thought on “Tales From The East”