After a couple of pints of “Estrella” – in training for Catalonia in March, no doubt – in the cosy boozer at the very southern end of the North End Road, I could feel the stresses and worries of work receding. Here we were again, in our preferred meet for midweek games, surrounded by a number of fine friends, awaiting yet another home match. I was cocooned in my own little Chelsea world, and loving every minute of it. There was laughs all around me, with talk of games past, present and future. Music played in the background. The beers brought smiles. Perfect. Or almost perfect.

One friend confided to me – “have to be honest, finding it hard to get up for this one.”

I understood completely. If we are anything at Chelsea in 2017/2018, it is spoilt. This League Cup match against Bournemouth had not managed to get my pulse racing. The much-derided competition was easily priority number four of four this season. And whereas, with us appearing in a home quarter-final, it would normally represent a very good chance for silver wear, we knew all too well of a likely trio of tough opponents waiting for us in the semi-finals.

On the previous night, Arsenal had beaten West Ham and I had listened to Manchester City triumph on penalties against Leicester City on the radio. While we were playing Bournemouth, Manchester United would be playing at Ashton Gate against Bristol City.

A final four of Manchester’s City and United and London’s Arsenal and Chelsea?

It did appear likely. We had to admit that silver wear still seemed a long way away. But first there was AFC Bournemouth.

Glenn was able to break the team news to the rest of us.

“Looks like Ampadu is playing in defence. Michy is playing. Drinkwater and Fabregas in the middle. Kenedy starts too.”

Outside, it was a mild night in London town. I walked past the blue and white tinselled Christmas tree outside the West Stand, which itself was decorated with thousands of white lights, hanging from the roof like icicles. I bought a match programme. Once again, the cover again harked back to a previous League Cup campaign, this time from 1994/1995 when we played Bournemouth in a two-legged tie in the autumn of that season. Believe it or not, only 8,974 watched the first game at Stamford Bridge while the gate in the return leg at Dean Court was 9,784. I only attended the away leg, watching on the terraces in the home end alongside a relative visiting from Australia, who was visiting friends in Bournemouth. It was an enjoyable night, but in that particular season with European travels dominating my thoughts for the first-ever time, the League Cup certainly seemed like “priority number four” that year too. We would lose at West Ham in the next round.

Inside, I noted yawning gaps in the three thousand seats allotted to the away fans.

I checked out the team as it lined up towards The Shed.

The game began and, before we had time to settle, the youngster Ampadu gave away a silly cheap foul, and was booked. His game could not have started any worse.

The away fans could be heard :

“Is this The Emirates?”

It was a quiet start, for sure, though on thirteen minutes we carved open the Bournemouth defence in a very fine move. Batshuayi played the ball to Kenedy, cutting in from the wing, and a tasty back heel set up Cesc Fabregas. He rolled the ball across the six yard box.

“This is our first goal” I whispered to Alan.

Willian crashed the ball into the roof of the net.

After his booking, Ampadu looked relaxed and confident and I noticed how soon he released the ball forward to team mates. No dilly-dallying from this boy, the lad with crusty dreadlocks and a loose and yet composed style. It is hard to believe he is just seventeen.

As we dominated play, I was pleased to hear a little more noise than against Southampton. Jermaine Defoe was substituted early on, and we relaxed; the bugger always seems to score against us. Willian pulled up, expecting a free-kick to be whistled by referee Lee Mason, but there was nothing. Bournemouth pounced on the loose ball, but substitute Jordon Ibe struck wildly over.

Just before the half-hour, Michy appeared to swing and miss at the near post after good work by Pedro. A couple of minutes later, Batshuayi did connect, going close. Gary Cahill then volleyed narrowly over from distance. It had been total domination from Chelsea, but now the atmosphere had quietened completely. It had certainly been a competent performance from our players. I liked the quiet industry of Danny Drinkwater, a latter day John Bumstead, even wearing the same shirt number. In our goal, Caballero hardly touched the ball. He had borrowed Thibaut’s word search and I suspect that he did rather well. Batshuayi, though, had not shown a great deal, being shoved off the ball on a number of occasions. But not many complaints.

This was men against boys.

Or at least ten men and a boy called Ethan against boys.

The second-half began, and – bloody hell – Bournemouth earned a couple of corners. Ampadu was soon showing fine positional play as he cleared several forays into our box. The upturn in the away team’s performance, now clearly a much bigger threat, resulted in a resounding reaction from all four sides of Stamford Bridge.

Bournemouth, miraculously, bizarrely, worryingly, dominated possession, but hardly created anything of note. How they missed Defoe.

This was, undoubtedly, turning into a game of two halves. What a strange game. In the stands, things became nervy.

We spotted that the away end was now completely full. I wondered if a few hundred of the away supporters – on a Darby & Joan outing from a few sheltered residences in the Bournemouth area – had decided to go Christmas shopping in the West End, getting presents for their grandchildren, and had been waylaid by the window displays on show.

“Selfridges put on a simply wonderful display, and well, we had to go in. Oh and the lights were wonderful on Oxford Street.”

Despite much possession, shots on our goal were rare. A lone shot was blasted over. However, we were pegged back, and hardly enjoyed any meaningful attacks of our own.

The manager Conte sensed the need for a change, bringing on Hazard and Bakayoko for Willian and Pedro. Hazard tucked in alongside Michy and a more resilient 3-5-2 took shape. Kenedy, having a patchy game – just like Zappacosta on the other flank – had tried one or two audacious moves in a few of our rare attacks down below us. In one last move, he approached his marker and attempted a ridiculous back flip. I was shocked by his – what is the word? – chutzpah, but was left wondering if this sort of move is best reserved for a futsal court rather than the English game. His appeal for a handball once the move floundered was met with a similar “tut tut” from me too.

Morata replaced Michy, who had been a virtual spectator throughout the second period.

The message came through that Mourinho’s United were trailing at Ashton Gate. Now then, the Chuckle Brothers hate Bristol City (Glenn, PD and little old me can trace this back to August 1984, but that is another story) but we hate United more.

The Chuckle Brothers chuckled away.

Bournemouth blazed over via Gosling.

“CAREFREE WHEREVER YOU MAY BE, WE ARE THE FAMOUS CFC.”

Our visitors went wide with Ibe wasting a good chance. With ten minutes remaining, Caballero sprawled and clawed away a cross at the near post with strikers waiting to pounce. This was just ridiculous. There were more nerves in the stands.

Alan : “ They are going to wonder how on Earth they haven’t scored in this half.”

United equalised down in Bristol.

With one-minute left, we all feared the absolute worst as a high ball was launched into our box. Morata’s header was weak and the ball was worked to Gosling, who swept the ball past Caballero. I saw it coming. We all saw it coming. We know football.

A dreaded extra thirty minutes of extra time beckoned, the worst possible scenario for my little band of football fanciers from Frome. It would mean another bloody late night.

With the away fans still celebrating, and with us still huffing and puffing at our bizarre and listless performance throughout the second-half, we kicked-off. The ball was quickly moved through towards Morata, who pushed the ball on to Hazard. Morata continued his run, and Hazard read the situation perfectly. His back-heal was magnificent. He virtually walked it in to the net, flicking it past Artur Boruc, with consummate ease.

I was smacked in the chops by a sudden and complex mix of emotions. There was shock at our ridiculously quick response to the equaliser. There was joy. But as the players celebrated wildly down below me, a very small part of me – oh don’t worry, infinitesimally small – almost felt sorry for the visitors.

What a crazy night.

On an evening where several clichés seemed appropriate to describe what I had witnessed, another one raced through my mind; that there is no riskier a time to concede a goal than when one is scored.

There was just time for a last, timely, save from Caballero at The Shed.

Into the final four we went.

On the walk to the car, the word went out that the hated Bristol City had scored a late winner against the hated United.

In the twenty minutes of our patient wait to head out onto the A4 at Barons Court, and for an impatient wait for the semi-final draw, the five Chuckle Brothers rued the possibility of a long-overdue visit to Ashton Gate with Chelsea. My last visit was for a pre-season shindig in 1995. There was the memory of that other game in 1984. And a visit, so long ago, in 1976 too. I recollected how Bristol City reached the League Cup semi-final in 1989 – eventually losing to Nottingham Forest – and how a then workmate was embroiled in the excitement of it all. We waited, and hoped.

Oh well. Arsenal it is. We can’t seem to avoid them these days. I will get to see them at least six times this season.

On Saturday, we visit my favourite away stadium, the grand old dame at the bottom of Stanley Park. 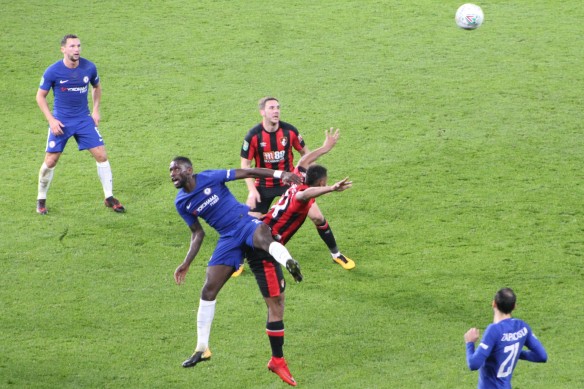 3 thoughts on “Tales From CFC Versus AFCB”