So, this was it. The big test. The much-anticipated visit of Jurgen Klopp’s Liverpool, with their six league victories out of six. On the train journey up to London, we all spoke about how excited, and yet nervous, we were ahead of the game at 5.30pm. We chatted briefly about our come-from-behind win against the same opposition at Anfield three days previously. We knew we had ridden our luck a little. But that game highlighted two things to me.

One – we are a vastly different team when Eden Hazard plays. He makes us tick.

Two – our support should never be maligned again. Although I did not attend the game on Wednesday, I was absolutely elated to see that we had taken around five thousand up to Liverpool. And it seemed to me that the younger element of our support – for a while, it seemed we had missed out on a generation – made up a large proportion of those travelling. Maybe those that cannot always get tickets for Anfield in the league decided to travel up on a weekday evening, not always the easiest of logistical operations. Top marks to everyone who travelled. You made me proud.

In the first of the six pubs that we visited before the match, I admitted to Andy from Kent that I was actually enjoying the nervousness of the game with Liverpool.

“To be honest, we have enjoyed so much success over the recent ten years or more, that sometimes we take it for granted, all of this, game after game, especially at the Bridge, regardless of the opposition. But because they – Liverpool – have started so well this season, and because we know what they can do to teams, I’m nervous, but I’m enjoying that emotion. It feels good.”

I had meticulously planned another pub crawl a few weeks back, and I had fastidiously reviewed my plans. We were all relishing another Chuckle Bros Pub Crawl.

After a breakfast at Paddington, though, the disruption caused by the closure of the District Line meant that we chose to head down to our designated meeting point by cab. We headed to the most southerly part of Fulham, right where the bend of the Thames is at its flattest, and made it our home for almost five hours.

I have often mused about the geographical reach of “Chelsea pubs” on match days, and in the lead up to the game, I thought again about what constitutes a Chelsea pub and what doesn’t. My very first pub was The Cock back in 1984, and my mind went on a temporal and geographical journey as I remembered previous seasons and previous sessions.

1985 : The George, alas no more, now an Estate Agents at the junction of the North End Road and Fulham Road.

1986 : The Stamford Bridge Arms, aka the Cross-Eyed Newt, originally the Rising Sun, and now The Butcher’s Hook.

1988 : The Fox And Pheasant and The King’s Arms, now the Broadway Bar & Grill, previously The Slug & Lettuce.

Since then, our boozing has taken us to new territories.

North : The Finborough, The Ifield – now closed, The Pembroke, The Courtfield – now an away pub – The Blackbird, O’Neils – now renamed – and The King’s Head, The Lillie Langtry, The Imperial, The Atlas and The Prince Of Wales.

South : The White Hart, now a Thai restaurant, Brogan’s, The Black Rose, formerly The Britannia, then the So Bar and now a hideous cocktail bar, The Jam Tree, formerly the Nell Gwynne, The Beer Engine, formerly The Wheatsheaf, The Hand And Flower, no more, The Imperial, The Morrison, formerly the Lord Palmerston – closed – The Rose, The Chelsea Ram, The Tommy Tucker, formerly The Pickled Pelican, Simmon’s Bar and the White Horse on Parson’s Green, aka “The Sloaney Pony.”

East : The Gunter Arms, The World’s End, The Chelsea Potter.

West : The Oyster Rooms, The Fulham Dray – closed – The Barrowboy – closed, The Mitre, The Malt House, formerly the Jolly Maltsters, The Wellington, The Rylston, The Goose, The Elm, The Old Oak, The Clarence, The Seven Stars – closed – The Colton Arms and The Famous Three Kings.

On this day, we would be stretching the southern limits. Just off Putney Bridge tube, we first spent a while in the cosy “Eight Bells” which is often used by Chelsea en route to Craven Cottage. We were joined by “the Kent lot” and also Foxy and Drew fae Dundee. We watched as West Ham went 2-0 up against United. Ho ho ho. Next up, “The King’s Arms” – a bit plusher, but actually cheaper rounds – and then the quite unique interior of “The Temperance”, and a few Chelsea were inside. Over the road, we dipped into “The Golden Lion”, where more Chelsea were located, though I doubt if many of the faces on show were off to the game.

As Parky commented “if the devil could cast his net.”

Over the road, the Fulham High Street, to the swanky “King’s Arms” and we were the only football fans there. In fact, we were virtually the only blokes there.

Lastly, like homing pigeons, we could not resist heading north up the Fulham Road towards Stamford Bridge and we popped into The Durell Arms for one last guzzle.

No football fans in this one either. Rugby fans. Swerve.

So, I’m not convinced that these six additions could really be classed as “Chelsea” pubs; if anything they are Fulham pubs. After walking for a while, we clambered on board a bus which deposited us right outside Fulham Town Hall. It had been a riotous laugh but it was now time to think about the imminent game.

With eight pints of lager sloshing around between my ears, I kept thinking “concentrate you bastard, concentrate.”

We all made it inside with around ten minutes to spare. It was still a stunning day. Stamford Bridge was crowned with a cloudless sky. It was a perfect evening for football. Maurizio Sarri’s team selection carried no surprises. Thankfully, Antonio Rudiger’s knock at West Ham was not serious enough to stop him playing. It was the starting eleven, I think, that most people would have chosen.

For all of our fears concerning the threat of Liverpool, based on their excellent start to the season, I gained a certain amount of solace from the fact that their midfield three consisted of Henderson, Milner and Wijnaldum; hardly world beaters in my book. However, it was in defence and attack where Liverpool would surely make life difficult for us. Their “fab three” of Firmino, Salah and Mane could, in theory, give our defenders a torrid time. And their defence, much-improved from previous campaigns, look more like a cohesive unit these days.

Over in the far corner were three-thousand away fans; a mixture of scallies from Scotland Road, Koppites from Kirkby, Gobshites from Guildford and half-and-half scarfers from halfway around the world. Just before the two teams entered the pitch, the away fans draped a “Justice For Grenfell” banner over the balcony wall of the Shed.

The two teams entered the pitch.

It would be the forty-fourth time that I would be watching Liverpool at Stamford Bridge.

The classic blue versus red.

Liverpool are sticking with a darker-than-usual shade of red this season. It is almost a blood red, much different than the lighter hues of recent memory.

The game began, and before we had time to catch our collective breaths, Liverpool were on the front foot and creating chances. Two fell to our former bit-part-player Mo Salah, but he must’ve put his boots on the wrong feet. First an easy shot at Kepa and then a ridiculous blast high and very wide. Next up, Mane followed the wildness with a wide effort of his own. It was certainly advantage to the visitors, as I had quietly feared, but Chelsea then started to create some chances of our own. Raiding down the left, wearing the 17 shirt, it is easy for the mind to play tricks; is that Eden Hazard from 2012, or the bustling Mateo Kovacic from 2018? Either way, both players looked lively.

On twenty-five minutes, a fine move – quick passes – saw a ball played by Kovacic out to the feet of Hazard in his trademark inside left position. My initial thoughts were this :

“That’s a pretty tough angle, he has a lot to do there.”

I need not have worried one iota. Rather than come inside and strike across the ball with his right foot, he looked up and aimed a low shot at goal with his left peg. It would be our first real shot on target. But it was enough. The ball, miraculously, sped just past the fingertips of Allison and nestled into the far corner of the Liverpool goal.

Arms were lifted high into the sky and a guttural roar swallowed Stamford Bridge whole.

We were 1-0 up. Over one hundred yards away, I could just make out Hazard being engulfed by his team mates, and within easy range of the away fans.

It seemed that at that exact moment in time, Eden Hazard was carrying the entire football club. Since his formidable World Cup with Belgium, and his excellent start to the season, his name has been on everyone’s lips. There have been doubts among many at Chelsea over the last few years about his true value, and ultimately his ranking among the very best, but it seems he can do no wrong in these opening games of 2018/2019.

Playmaker, provider, and now goal scorer. It seems that it is all about Eden.

It would not surprise me to see him out on the pitch with ten minutes to go before kick-off with a microphone in hand running through the teams nor after the game taking the goalposts down.

Liverpool immediately countered, and only resolute defending from the central partnership of Luiz and Rudiger stopped the visitors from equalising. We had all expressed doubts about our defence, our weakest link in so many eyes, but I was so pleased to see strength and togetherness, rigidity and power.

We had heard that Manchester City had beaten Brighton before the game, but that seemed to be an irrelevance. Everything was about Chelsea.

Into the second-half, chances were exchanged.

At The Shed End, our goalkeeper – who had not really been called upon to make a save of note – slung himself down to his right to push aside a low shot from Mane. There was thunderous applause from the home faithful.

Our chances were rare, but after a quickly taken free-kick, we were all on our feet to watch as Hazard raced clear of the high line of defenders, but we watched in agony as Allison managed to spread himself and ensure the ball hit a part of his frame before bobbling up and over his goal.

The minutes ticked by.

Olivier Giroud was replaced by Alvaro Morata, but I still sensed that Hazard was our only goal threat. Xherdan Shaqiri replaced the ineffectual Mo Salah for the visitors. Within minutes of coming on, he steered a good chance wide of Kepa’s goal.

Liverpool were applying constant pressure now. We were all clock-watching. We had to thank David Luiz, playing his finest game for us this season and probably since 2016/2017, as he cleared a Firmino header off the line. This was real backs to the wall stuff now.

Ross Barkley replaced Kovacic, his best game for us.

A Shaqiri free-kick was well saved by Kepa.

With five minutes remaining, Milner was replaced by Daniel Sturridge. I remembered his last appearance at Stamford Bridge as a hapless member of a doomed West Brom team and the almost pitiful injury which forced his early exit from the game.

In the eighty-ninth minute, the ball broke to Sturridge. Without so much as a single second of thought, he instinctively struck a firm and yet slightly curling laser which flew over our flailing ‘keeper and into the highest portion of the goal. 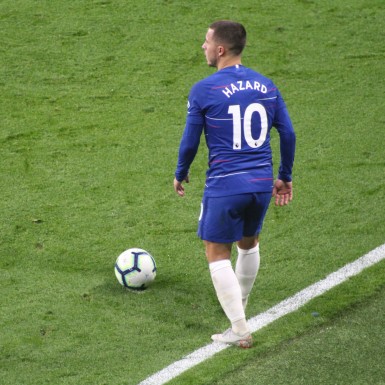 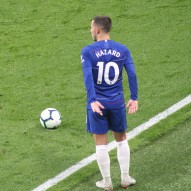 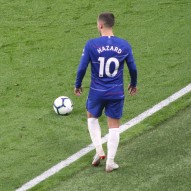 2 thoughts on “Tales From Fulham High Street And Fulham Road”