The Saturday afternoon encounter with Brighton was our third home game of the week and our fourth consecutive home match. When did that last happen? I am struggling to remember.

Glenn, PD and little old me were seated in our favourite corner of our favourite Chelsea pub. We first walked in to “The Eight Bells” down in deepest Fulham almost a complete year earlier; it was the starting point of our “SW6 Pub Crawl” before the Liverpool game on Saturday 29 September 2018. And we immediately fell in love with it, as have many.

In the previous week or so, I had been in contact with my friend Mac, who spends half his life in England and half his life in the Czech Republic, or Czechia as it likes to be called these days, and he was planning to meet us at some stage. While we waited, some other friends and acquaintances had decided to visit the cosy boozer too. First, Alex and Pat – Stafford and London – and a few of their mates arrived. Then, Mark – now living in Zoetermeer in The Netherlands – and Kelly – High Wycombe – arrived and sat down beside us for a chat. Seeing Mark always evokes a special memory for Glenn and I. We first met Mark on the last U-bahn train back into the centre of Munich on that special night in 2012. Gary, mentioned in dispatches in the Grimsby Town report – from Perth in Australia –  joined us, and soon launched into a plate of bangers and mash. At some stage in the proceedings, Brian – Northampton – sat close by too. It was a real gathering of the clans. There had been plans to meet up with Dale – Chicago – and Ollie – Normandy – but they never made it.

“The Seagulls have landed.”

Yes, dear reader, Mac is a Brighton supporter. I have already detailed how Mac and I became friends in these match reports, but a brief summary.

May 2013, “Foley’s”, West 33 Street, Manhattan. I was in New York for the Manchester City friendly, and Brighton had just lost to Crystal Palace in the play-offs. It was me hearing Mac talking about those games that initiated a reaction from me – partial smile, partial grimace – which in turn lead to this from his then girlfriend.

We immediately clicked. Two football-mad blokes in a foreign city. Sometimes distance from England makes the memories of the game and the impact of the game on our lives stronger, clearer, more profound. Or was that just the beer? Regardless, we just loved chatting about the game and we shared some laughs.

It was lovely to see him again; the last time was before our game in December 2017 in “The Goose.” Mac was with some fellow Brighton followers Gary and Barry, and a couple more of his friends joined later.

While I chatted to the three Brighton supporters, Glenn and PD were chatting away to Mark and Kelly and at times they were making so much noise that I had trouble concentrating. The cosy corner was becoming our very own Chuckle Land.

We did our usual flit along to the “King’s Arms” and spotted a fair few Brighton fans drinking in this much larger pub. The Sheffield United vs. Liverpool game was on TV. Despite a screen only ten feet away, we gave it scant attention. But we certainly howled when the Blades’ ‘keeper let a shot slither through his legs to give Liverpool a late win. We talked football, we talked about VAR, we spoke about the good old bad old days. We made plans to meet up in Lewes ahead of the return game on New Year’s Day in deepest Sussex. 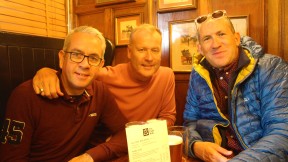 It was soon time to head off to Stamford Bridge. We hopped on the northbound District Line at Putney Bridge and soon alighted at good old Fulham Broadway. For the fourth time in just twelve days, I was home.

After the odd, and obviously embarrassing, appearance of the Eden Hazard banner at the Liverpool game, it was reassuring to see the correct Frank Lampard one being carried over the heads of those down below us in the lower tier.

It was neither warm nor cold, neither overcast nor sunny. There were three thousand away fans at The Shed End. We had heard that, sadly, N’Golo Kante was out for us.

No huge thoughts about the line-up. In Frank We Trust and all that. But I was a little surprised that Ross Barkley started again. It is interesting how Mason Mount has been played in a wide berth this season; I expected him to join the log-jam in the centre. Maybe Frank rates him that highly that he needs to shoe-horn him into the starting eleven regardless. No problems with Fikayo Tomori starting. He has really impressed of late. I can hardly remember any serious errors at all. More of the same please.

The game began. The away team were in all black, the default colour for alternate kits these days in the same way that yellow shirts seemed to be de rigueur in the ‘seventies.

In the pub beforehand, Mac was rather effusive about Graham Potter, the new Albion manager, and his new way of playing, which seems to be a lot more attack-minded and entertaining than that of Chris Houghton. So, the three of us that had been privy to these comments expected that the away team might have a go at us. In the first-half, for starters, how wrong we were. The first period was totally dominated by ourselves. Brighton rarely entered our half. However, despite all of our possession, at half-time the mood among the home sections was of quiet frustration.

In the first part of the game, there were shots from Jorginho, Abraham and Willian. Typically, a couple of these were blocked. On a quarter of an hour, a sweet cross from Mason Mount was met by Tammy Abraham, but the effort touched the goal frame and the chance was gone.

As Brighton began to be more adventurous, I really enjoyed seeing Mason Mount make an energetic burst down below me in the corner when he spotted that a Brighton player had miss-controlled slightly. He immediately sniffed out the chance to make a challenge, a tackle, and we applauded him as he won a throw-in. The run-down was indicative of his energy and enthusiasm. Some of our more established players please take note.

Neal Maupay caused us the first moment of concern, bursting through the middle, but Kepa read the situation well and ran to block on the edge of his box, using his chest rather than attempting to thwart the attack with his hands.

All of our attempts seemed to be fastidiously blocked. Willian had his usual three or four shots on goal. The best chance came from a cross on the Chelsea left from Marcos Alonso. He carefully picked out Ross Barkley and – cliché coming up – put it on a plate for him. His perfect cross towards the six yard box was met first time by Barkley, but the volley was straight at Brighton ‘keeper Mat Ryan.

The home fans howled in agony.

It was the story of the first-half.

Pedro was set free but fluffed his lines, and Alonso skied another late chance. We had peppered the Brighton goal all half, but the game was scoreless. Throughout the first period, the noise was hardly great, it was hardly average. The away fans provided most of the noise, as per usual. Ross Barkley endured a poor half with little real impact.

As the second-half began, we hoped for better things.

Thankfully, after just five minutes of play, with Chelsea attacking us in the Matthew Harding, defender Adam Webster made a hash of an intended back pass to his ‘keeper. Mount pounced, and Webster clumsily tried to rob our raiding midfielder. The penalty was nailed on.

VAR. We waited. Brighton players stood around the referee. The penalty decision was upheld. Shocker.

Annoyingly, some Brighton players still kept chattering away to the referee. Under the circumstances, a quick yellow to the noisiest complainer should have been used. Backchat after VAR? A booking. Bloody good job supporters don’t get yellow cards, though, eh?

Jorginho took the ball, despite Barkley and Pedro being on the pitch.

Is everyone keeping up?

A run, a skip, and the ball was placed into the goal. 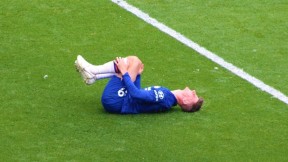 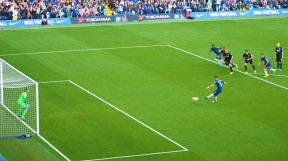 We kept on the front foot. A fierce effort from Pedro was saved by Ryan, Tammy went close. But then Brighton came to life a little, attacking us in the way that perhaps we had expected from the off. The visitors’ best chance came from an in swinging corner, their first of the entire match, taken from in front of their supporters, and the delivery was headed down by Dan Burn and the ball bounced up onto the Chelsea crossbar.

We sighed a collective “phew.”

Callum Hudson-Odoi replaced Pedro and then there was a Sarri-esque substitution with Mateo Kovacic replacing the under-firing Ross Barkley. Callum began on the Chelsea left, and it was his confident run from a deep run into a central area that allowed a pass towards Willian. The winger, often the subject of much wittering and complaining from some in our midst, advanced before a trademark shimmy to gain a yard of space. His slash past Burn was deflected in at the near post. 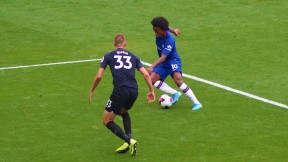 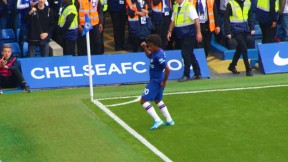 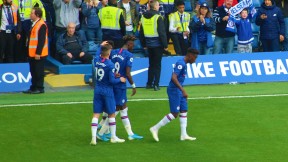 I looked at one of Willian’s chief detractors in the eye.

Surely the game was safe now? It absolutely felt like it. There was one extra golden chance, when Tammy attempted a subtle dink over the Brighton ‘keeper from inside the penalty box but the chance went begging.

At last a home win, at last a clean sheet, and there was relief from us all. As we made our exit, the sight of Frank Lampard walking on the Stamford Bridge turf and clapping, his arms above his head, was a welcome sight. This is an evolving motif of this season, at Stamford Bridge, and it is a lovely development. A simple act, but it brings so much warmth.

Let’s hope we all have more to cheer, to applaud, in games to come.

There is a positive vibe at Chelsea at the moment. It seems that our Chelsea has been handed back to us on a silver salver.

And it feels good.

Safe travels to all those heading over to Lille for the game on Wednesday.

My next game is on this side of the English Channel, just.

See you at Southampton.