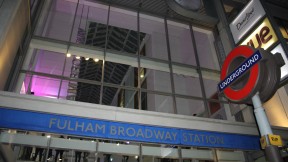 Manchester United at home. Regardless of the competition, it is a huge match. I was well aware that a home game against any other opposition at this stage in the League Cup competition might have induced feelings of weariness, but this one was different. The chance to get one over the biggest club in England, and a chance to seek some sort of revenge for our 0-4 defeat on the opening day of this season, was welcomed by myself and many others.

This build-up to this game followed the same course as many similar midweek fixtures at HQ; I finished work at 3pm, PD drove, into “The Goose” for one, then down to “Simmons.” I spent some quality time with some special friends from Australia in “Simmons.” Glenn and I spent a fair few hours in the Chelsea pub in Perth last summer with Neil and Sammy – husband and wife, from Oxfordshire, now living in Adelaide – and although we missed each other against Newcastle United, we planned a meet-up for this game.

Those observant souls will remember me mentioning them in the Newcastle match report :

“My missing friends eventually made it in; Neil and Sammy from Adelaide down below me in the MHL, probably quite near Leigh-Anne and John from Toronto.”

Not only were Neil and Sammy indeed close to where Leigh-Anne and John had watched the game, but the four of them had spent a fair while chatting to each other, oblivious to the fact that I knew them all, in “The Blackbird” pub at Earl’s Court while they waited for the arrival of match tickets, all from the same source, a mutual friend. As I have said before, Chelsea World is a very small world.

PD, Parky and I set off early to meet up with a Chelsea mate who had tickets for Watford and Manchester City. We waited outside Fulham Broadway, and waited, and waited. I spotted a large mob of United whistle past – without colours, but I knew they were United – and we then raced on to try to reach our seats for kick-off. We made it just, but missed the usual stage-managed pre-match activities /atrocities.

As I mentioned in the closing words of my Burnley match report, this game would be the seventy-fifth time that I would see Manchester United play Chelsea across all competitions and all venues. The first time was in December 1984, a harrowing 1-3 loss at home.

But not only was this game number seventy-five against United, this represented – believe it or not – the first time that I had ever watched a match alongside Parky at Stamford Bridge. In all the other games, he has either watched from his own seat in The Shed Lower, or elsewhere. On this night, PD, Parky and I were able to sit together in The Sleepy Hollow.

During the second-half, I was to take a photo of the match framed through his crutches.

There was a quick scan of our team. Frank had definitely chosen a B team of sorts.

On the other hand, although I am not as familiar with the Manchester United squad as in previous years – a sure sign of their demise – I recognised many regulars. I spotted Daniel James, the little prick who scored on his debut against us in August. But Brandon Williams, a full-back, was a new face to me. Additionally, I hardly recognised Fred, whoever he is. I knew that Fred the Red was the United mascot, but I didn’t realise he actually fucking played for them. And I thought that Sergio Romero was a fucking golfer.

You can tell from my rich use of the English language that after seventy-five games, familiarity certainly breeds fucking contempt.

I gazed over at The Shed. The sight surprised me.

It was solidly United, but with netting over the first four rows of the upper tier.

“Is that to stop United throwing things at the United fans below?”

It was an odd arrangement. My quick presumption was that the police had stopped Chelsea giving them a full six thousand. It looked nearer four and a half thousand. They were all stood.

There were a few typical United flags on show in the upper.

The Inter-City Jibbers, a sub-section of their support back in the ‘eighties who took great quasi-Scouse delight in jumping trains and tubes en route to games.

Yep, seen that one before.

I originally thought that it said “no bother.” I needed a second look. I had heard of the term “mithering” but this would need some research. I Googled it. Interesting. Go on, have a look.

I surmised that this referenced Swinton, Lancashire and not Swinton, Yorkshire.

The game began, and it didn’t exactly live up to its billing. We certainly had much of the ball during the first period, but could do little with it. I got the feeling that the United defence was too solid, too deep, too regimented for us to break it down. Scott McTominay took the eye in the first part of the game, breaking up play one minute, shooting at goal from inside the box the next. Our midfield three struggled to link up, and struggled to find the runners. I lost count of the number of times that Callum, out wide on our right and with potentially lots of space to exploit, chose to pass inside to others. On the other wing, Christian Pulisic – the hero at Turf Moor – hardly got in the game.

The noise inside the stadium was far from great, either. United were making most of the racket – par for the course really – but not at the same level as in February this year when they dumped us out of the FA Cup. That missing thousand and a half made all the difference, I guessed.

On twenty-five minutes, a burst into our final third from United spelled danger. James carried the ball into the box. Rather than a block tackle from Mark Guehi, who stood off too much for my liking, it was left to a poorly-timed slide from behind from Marcos Alonso to halt the United attacker. It was a penalty all day long.

Marcus Rashford dispatched it, and I ummed-and-ah’d about bothering to take a photo of the fuckers celebrating down below.

The United hordes stepped up the volume.

“Who the fuck are Man United as the reds go marching on, on, on?”

We stumbled and bumbled our way through the rest of the first-half. It was not pleasant viewing. It was disjointed and tepid. United had done a job on us. I do not remember a single shot on goal.

On my mind, although I didn’t fancy sharing it – a hint of superstition – in case I jinxed it, was the thought that we surely could not play as poorly in the second-half.

Thankfully, we upped the tempo, the desire and the quality soon in to the second-half. There was a low cross from Alonso down below PD, Parky and I which set up Callum perfectly on the edge of the six yard box but our young striker fluffed his lines, and sent the ball way past the far post. But the home crowd responded to this.

We had the best of it for a while. We had silenced the United lot in The Shed. It was all Chelsea. A blocked shot from Billy Gilmour, a Pulisic shot well wide, crosses whipped in. Next up was a dipping effort from Callum, after a great chipped pass from Pulisic, that dropped narrowly over the bar.

On the hour mark, a long punt from Caballero found the leap and head of Michy Batshuayi five yards inside his own half. The ball dropped further up field, and our Belgian striker was able to race on to his own assist. I immediately remembered Mark Hughes doing the same against Vicenza in the same part of the pitch – roughly – in 1998. I usually reach for my camera at moments like this but I decided to savour the moment.

Michy still had it all to do. He was in a race with two chasing defenders, with another trailing behind, and another between him and the goal. He raced on, beating his two main protagonists with ease, and slotted home a superb low shot at the far post.

It was simply magnificent.

His best goal for us by a country mile.

I loved the energy of Mason as he raced after two breaking United attackers and robbed them from behind with two perfectly-timed tackles. Unfortunately, Pedro was not so skilled in his attempt to rob the United mascot as he raced forward.

A free-kick was awarded.

For the first time the whole evening, I selected sports mode on my camera. I click, click, clicked as I followed the course of the ball from Marcus Rashford’s toe, up over the wall and into the corner of the goal.

The ball dipped all over the place.

It was some strike.

There were twenty minutes, more or less, remaining.

We kept trying but it would be oh-so difficult.

A chorus of “Jose Mourinho” just to wind us up.

Is that the closing line on him, then? He is theirs not ours? So be it.

Tammy Abraham came on for Michy.

United knew what to do, and despite our strongest eleven being on the pitch for the final fifteen minutes of the match, chances were rare. A few supporters began to drift away. The 8.05pm kick-off time would mean a race for some to catch last trains and coaches home. It was not to be. We tumbled out of the League Cup. 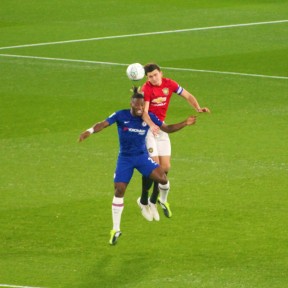 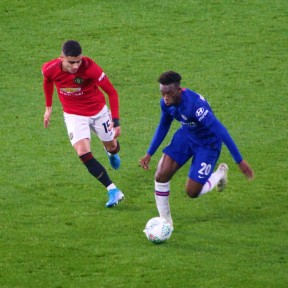 So, my milestone match against United took my total number of defeats to a round thirty.

During the course of the match, someone asked me for my favourite games against United, and my immediate reaction was this –

But that meant that I had neglected to mention the twin FA Cup Final wins in 2007 and 2018 and also the magnificent 4-0 in 2016. But I still stand by my top three, for what it all meant at the time.

The three worst? Do I have to?

The three of us ambled back to the car – we could hardly believe the nonsensical 5-5 at Anfield – and I was, thankfully, able to catch some sleep on the drive back West. By the time I reached home at just before 1am, this year’s League Cup campaign had been forgotten.

Next up, a Saturday evening game at Watford.