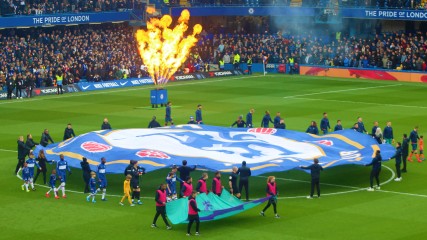 It seems that for every single Chelsea vs. Everton match report, I trot out the same key statistic of them not beating us in a league game at Stamford Bridge since that Paul Rideout goal gave them a 1-0 win during 1994/95. That match turned out to be as equally an inauspicious start to the unveiling of the first new stand – the North – since the previous time in 1974/75 when Carlisle United defeated us 2-0 as the East Stand made it’s bow.

But this year. This year felt a little different. Although the entire club was buoyed by the excellent FA Cup win against Liverpool, Everton were undergoing a relatively bright spell under the control of our former manager Carlo Ancelotti. And it felt, to me at least, that a tough game was on the cards. But could the accumulative effect of twenty-four seasons of hurt for Everton in SW6 – I have seen them all, won thirteen, drew eleven – impinge itself once again on Everton’s collective psyche?

I bloody hoped so.

And so while they have really suffered at Chelsea over the years, they have had the upper hand over us at Goodison Park for quite a while now.

Which Everton would show up?

I suppose, deep down, I knew all along.

My preparations for the Sunday afternoon match began the previous evening in a local vllage called Kilmersdon, where a fellow Chelsea season ticket holder – Sue – was celebrating a “surprise” birthday party. Her daughter Chelsea and husband Stuart sit in the same section of The Shed Lower as Parky, and although I do not know the family that well at all, I thought it would be the height of bad manners for me not to make an appearance. Our two villages are, after all, just four miles apart.

I strolled into the village pub, spotted the three of them, but also my old Chelsea mate Terry, from Radstock, a few miles further away. I have known Terry since the 1984/85 season when I used to very occasionally catch the Yeovil Supporters Coach to games. In truth, I think this only happened twice (vs. QPR in 1984/85 and vs. Arsenal in 1985/86) but I also remember the Yeovil coach calling in at Stoke so I could piggy-back a ride up to Old Trafford in 1985/86 too. I can remember taking him up to a few games c. 2003/4 when I worked in Chippenham. He used to have a ST in the Matthew Harding Lower. I had not seen Terry at Chelsea for years, but saw him at a “Buzzcocks” gig in Bath a couple of years ago in addition to one or two at “The Cheese And Grain” in Frome. We share the same tastes in a lot of music.

Very soon into our conversation, Terry enquired “did you hear about Swan?” and I immediately felt that I was in for some sad news. Swan was also from Radstock, and used to sit with us on the famous Benches from 1985 to maybe 1987. He was a bit of a lad, a Jack the lad even, and with his curly perm, moustache and heavy frame he used to resemble Ian Botham. He was a good lad, and was certainly on those three coach trips that I have mentioned. In 1986/87, his attendance tailed off, and none of us had seen him for ages. He used to work in an office in Bath, near the bus station, and I have a feeling that the last time I saw him was while he was on a lunch break in the city centre in around 1987.  We had heard he had gone to live up north; Leeds or Sheffield or somewhere.

Sadly, Terry was to tell me that Swan had recently passed away. This came as a real shock. He was surely no older than fifty-two or fifty-three. I texted Alan and Glenn, and a couple of other of the lads who sat with Swan in those halcyon days.

These photos show the unfurling of a Union Jack before our game with Tottenham in April 1985. Swan is at the back, sporting a grey, red and black Pringle if memory serves. Glenn is all smiles with the bubble perm, Alan is central with a ski-hat, as is Walnuts and Dave, while Rich is wearing an England one. In 1984/85 and 1985/86, ski hats were all the rage. And when I say benches, I mean concrete slabs. The Tottenham game was the first game that we had to endure those. But more of that another day.

In “The Jolliffe Arms” on Saturday, Terry and I raised a glass in memory of Swan. 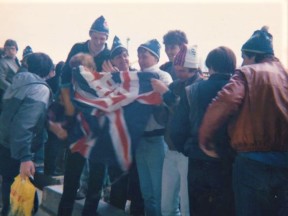 With the game against Everton kicking-off at 2pm, we had to be on our toes early on so that we could squeeze as much out of the day as possible. Glenn picked me up at 7.30am, and we were inside “The Eight Bells” in deepest Fulham at about 10.15am.

For the best part of three hours we had a blast. Tom was visiting from New York – sorry, New Jersey – and arrived in good time. He settled in seamlessly alongside PD amid tales of his planned trip to Cologne and Berlin after this little visit to London Town. On Saturday, he had seen Brentford dismantle Sheffield Wednesday 5-0. It would be bloody lovely if Brentford’s first season in their new digs could be in the Premier League.

Glenn joined us after parking his van.

Then the Jacksonville Four – Jennifer, Brian, Jimmy and Eugene – joined us. It is always a pleasure to see their smiling faces, even if Eugene was wearing a Boston Red Sox cap, and they were excited about being back in “The Eight Bells” once more.

Jimmy and Eugene had chosen Leyton Orient’s game against Cambridge United. I love it that Chelsea fans take a look at lower level football while in London. Top marks.Two lads from the days of Swan on The Benches arrived – Richard and Simon – and I noticed that our former player from the glory days of the early ‘seventies Alan Hudson was in the pub too. He very kindly stopped by for a photo call.

These photos show how much fun we had.

[inside my head : “fackinell, these Americans love their Chelsea scarves, eh?”] 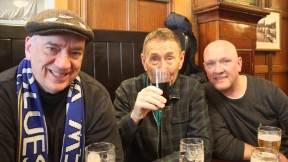 Inside Stamford Bridge, Everton had their usual three thousand. We had learned that, perhaps unsurprisingly due to our large injury list, Frank Lampard had chosen the same starting eleven as against Liverpool, apart from young Mason Mount taking over from Mateo Kovacic.

The Evertonians took off their dull tracksuit tops to reveal their bright pink shirts.

I was surprised to see King Carlo on the touchline; I had presumed that he would have been banished to the stands after his recent indiscretion. Ten years on from the double season, Carlo stood ten yards from Frank. They had embraced on seeing each other and I remembered hearing Frank Lampard speak so sweetly about his former manager when he talked to a packed bar in Manhattan in 2015.

“Jose Mourinho is the greatest manager that I have played for, but Carlo Ancelotti is the nicest man that I have ever met in football.”

We began the game well, with Willian teeing up Mason Mount to volley from just outside the six-yard box. There was a fine reaction save from Jason Pickford.

Unlike most away fans who visit SW6, Everton were hardly a riot of noise.

In the first ten minutes, a first. The ball was hoofed clear and it made its way up to the very front row of The Sleepy Hollow. There were a few cheers, a few jeers, and I found myself getting far too excited about it.

“That’s the first ever time, right?”

There had been shots that had ended up in the more central portion of the Matthew Harding Upper, but no ball had reached the corner section.

Fuck, I need to get out more.

Not long after, a move developed down our left. Alan had just been out to turn his bike around, and I looked up and moved to let him sidle past. With that, in the corner of my eye, I saw that Mason Mount had smashed a goal home, the lower corner.

Oh well, I don’t miss too many.

The goal was replayed on the TV screen. It was, undoubtedly, a fantastic strike.

There had been a rare, weak, shot from Richarlison, but Barkley played Willian into space down the right but his shot, from an angle, was palmed away down low by Pickford.

On twenty minutes, a neat interchange of passes between Gilmour, Giroud and Barkley – with a slide-rule pass which pleased us all – sent Pedro racing free. He had both sides of the goal to aim for, and it always looked like he would score. He chose the right side and score he did.

Thankfully there was no VAR annulment.

After a shaky moment from King Kurt, Richarlison broke and Dominic Calvert-Lewin wasted a good chance as his effort bounced wide, past Kepa in his all-black Lev Yashin kit.

We were purring in that first-half.

Five minutes into the second period, I watched as a long passing move developed. It seemed to me that there was not one wasteful pass, every movement of the ball was purposeful. Eventually, Barkley played it to Willian, still some twenty-five yards out. He, like Pedro for the second-goal, had time to choose which side of the goal to aim for. Both sides were unprotected. His low strike flew in to the right of Pickford.

Willian slid into the corner.

Just three minutes later, Willian took a short corner, then slung the ball into the box. Olivier Giroud, showing a cunning willingness to get tough and get dirty, threw a leg at the ball as it curled down and past the Everton defenders.

Everton might have been playing in pink, but they certainly weren’t pretty. Off the pitch, there was disappointment too. There hadn’t been a peep out of the travelling Evertonians all game, and now some began to leave the away quadrant.

But did we make tons of noise? Not really.

The game safe, Frank fluttered a few cards from the pack.

There were a few late flurries from us, and Kepa got down well to smother a cross from Theo Walcott, but no more goals were added to the tally. However, there was much to admire from our team on this Sunday afternoon. Billy Gilmour was just so pleasing on the eye. I love the look of him. He has a great mix of balance, vision, fluidity and tenaciousness.

He also has a wonderful footballer’s name.

The Everton horror show at Stamford Bridge continued for one more season at least.

Chelsea were, as ever, dominant.

Bloody hell. I guess this was always going to be a home banker after all. A great performance, a reassuring one, and a much needed fillip after a few doubts among our supporters of late. More of the same please.

Right then. Aston Villa away on Saturday. See you there. 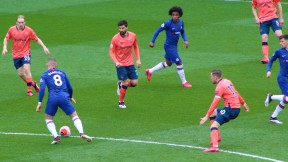 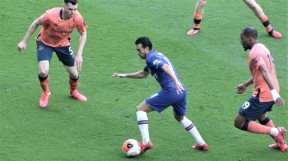 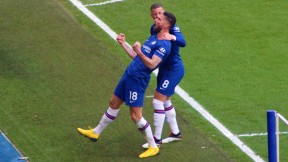 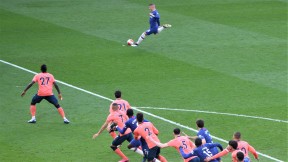