Liverpool’s surprising win at Old Trafford set things up nicely for our game against Manchester City.

Four of us – Glenn, PD, Dave and myself – set off for London at 9am. It looked like it would be a very pleasant day. I wore my new sky blue Robe di Kappa pullover, purchased at Turin airport, and I was reminded that Glenn wore a sky blue top for the game at Eastlands in the September sun. Maybe this would turn out to be a good luck charm.

Unfortunately, things took a worrying turn at my place of work on the Friday after my return from Turin. I aired a few thoughts with Glenn on the drive up to The Smoke. Let’s hope that my job is safe for the foreseeable future…at least as far as Rome in May and then America and Canada in July. Maybe I will have to cut back on games next season – I certainly can’t see myself keeping this pace up for much longer. There was an England rugby game at Twickers, so we came in around the M25. I was reminded of a day about ten years ago when we stopped at Fleet Services and I asked some rubgy fans “is there a game on?” just to wind them up.

They bristled with indignation – “Yes. England are playing.”

Ho ho ho. I am not fond of rugby fans as a lot look down their noses at us.

This was to be Farmer John’s ( mgoblue06 ) last game of his stay in England. He wanted to make a special day of it and so I ‘phoned Salvo to see if he could open his restaurant early. We made good time and were able to pop into the Lillie Langtry at about 11am for a livener en route to Salvo’s. We arrived dead on 11.30am. There was seven of us in total – Farmer John, his two Dutch college mates ( Matt, Arnhem and Nils, Groningen ), Glenn, Dave, myself and Larry ( New Jersey, one of the New York Blues ) who was watching his second ever game at HQ. I handed out some photos from my trip to Turin as we ordered some Peronis. Parky was running late and didn’t make it unfortunately.

As the pizzas were ordered ( for me – I made a nod towards my usual pre-match breakfast by ordering a four seasons with an egg in the middle ) I made a toast once again.

The green beer bottles clinked against each other.

The pizzas went down well. Larry told a nice story – he was at Newark airport on Thursday and noted a chap talking in a strong Eastern European accent. It turns out this bloke was Eugene Tenebaum’s best mate and Larry had a good chat with him. Small world.

We then raced over to The Goose for two more pints – how I hate these early kick-offs with no time for much of a pre-match. Everything was so rushed. My lot were in the beer garden and we were soon settled though. Dave and Lovejoy had spares which we managed to palm off to two more of Farmer John’s mates. I handed around my photos ( a third of the 275 I took in Turin! ) for Andy and Alan to look at. Al dropped them all and I had to refrain myself from having a “Rainman” moment.

I’m a bit obsessive about my photos!

We heard about the two Chelsea lads who were so pointlessly attacked in Turin. One only received surface wounds and was able to see the game. The other was more seriously hurt and our thoughts go out to him. One wonders why this never got any media attention. The pre-meditated attack by some Roma ultras on an Arsenal bus was reported though. As much as I love Italy, some of their fans are cowards. They always have to resort to blades.

The weather was great throughout the game. I arrived a couple of minutes late and so missed the offside goal from Frank. To be honest, I almost missed Essien’s goal. I saw Frank over the ball, looked up at the away fans, then saw the ball flying towards the goal from the “D.” I couldn’t work it out, but who cares? Essien really impressed me so much throughout the first half. He has so much energy and drive. How we missed him. We gave Wayne Bridge a magnificent reception and he clapped us on more than one occasion. He will always be loved by us at HQ. we passed the ball around well I thought, but City were awful…Robinhio especially. Just a bit annoying that we didn’t score more. I noted a lovely “one-two” between Frank and Essien, something that Ballack would never be able to do.

I had to laugh when Malouda came on. Our mate Tom, a spritely 72 year old, said “Ah – the Malouda Triangle…he goes missing.”

The only other high spot, apart from a Belletti shot which hit the post, was a defensive clearance which resulted in the match ball ending up a few feet from me. Glenn got hold of it in his two hands and threw it down to Frank Lampard. I was praying that a goal would result – Glenn would claim that assist for the rest of his life.

So, despite Liverpool winning 4-1 at Manchester United, they are still looking at our arse.

I said my goodbyes to Farmer John outside The Goose. He has certainly packed a lot in to his ten weeks in the UK – he has visited Dublin and Paris and will be off to see Rome, Florence and the French Alps on a skiing trip…but I am sure he will admit that the highlights were his five Chelsea games.

See you in Montreal, John. 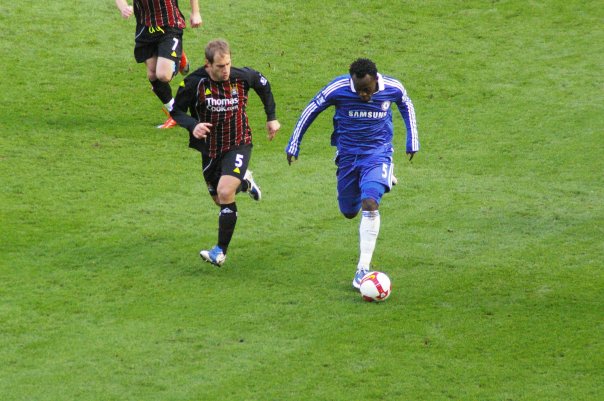