In many ways a lovely day out – great weather, great friends, a close game – but also an awful day out.

I left my Somerset village at just after 9am. The clusters of snowdrops in the hedgerows have now given way to thousands of daffodils in my village. It’s a picture. The weather was beautiful on the drive up to London. This was the first Chelsea game in my new car ( Vauxhall Corsa, black, wheel in each corner ) and I was just loving the drive. I had bought a Juve air freshener in Turin and I now have a Juve and Chelsea one on display. It just looks right. My head has been full of the CL draw, full of our plans to get tickets for the FA Cup semi final and full of plans for the summer tour. I am trying to talk Judy into coming with me. Judy likes the buzz of Chelsea – however, she doesn’t know there’ll be a baseball game thrown in for good measure. I will try and convince her that she’s a lucky girl! Watch this space.

I realised that there was a rugby game at Twickers and so again came in via the M25 and M4. Caught a tube from West Brompton and the warm weather surprised me. I eventually reached Liverpool Street and was soon outside The White Hart with Alan, Gary and Whitey. There are three pre-match boozers at Liverpool Street and the White Lion seemed the less busy. There was a mix of Spurs and Chelsea at The Railway Tavern, but there was a big mob of Chelsea at the Hamilton Hall. We spotted Rosey Cheeks and his colleagues keeping an eye on us all.

I only had time for a small coke before we caught the over ground train to Northumberland Park, just a few minutes to the east of Tottenham’s ground.

Ah, Tottenham…our biggest London rivals. Some would say our only rivals. While Spurs seem to reserve their most bitter rivalry for their North London rivals Arsenal, Chelsea certainly do not get on with Spurs. People tell me that this rivalry became intense after the 1967 FA Cup Final, but I just about remember the League Cup battles of 1972 and of course the relegation battle at Tottenham in April 1975. We lost that day and the Second Division beckoned…maybe oblivion. Two other games stick out…the 1-3 loss at The Bridge in November 1978 when the fighting was intense off the pitch, the football even worse on it. Then the 1982 FA Cup loss really hurt.

However, since then, we haven’t done too badly eh? Let’s never forget that massive long unbeaten league run against them. As if we could ever forget that.

What’s my take on this Chelsea / Spurs rivalry? Until the last ten years, I always perceived Arsenal to be the biggest club in London, but also the most staid and boring, with a predominantly middle-class support. Chelsea and Tottenham, though – at least in my childhood – seemed to be eerily similar…good in cups rather than the league, a mix of hard-nosed working class support but also the “glamorous” angle too with celebrity fans of both clubs. The hooliganism always seemed to be prevalent at Chelsea vs. Spurs games. There has always been that “edge.” I always used to revel in the perceived view that Spurs fans were very fickle back when I was younger. Not like us – not like Chelsea. No cups but rock-solid support! To be honest, I am fascinated by these subtle differences between sets of fans.

Strangely, when I was cutting my teeth as a football fan in around 1971, I used to favour certain players of other teams and specifically I used to like Clyde Best of West Ham, Steve Highway of Liverpool and – rather worryingly – Alan Gilzean and Pat Jennings of Tottenham. I’m sure other fans were the same. How many football fans could have resisted Peter Osgood and Charlie Cooke? Going way back to that era, I used to have a little “football book” of my own in which I used to write down team line-ups from the TV games. I also memorably remember writing Chelsea and Tottenham results over a two month period and hoping that Chelsea would fare better than the lilywhites, as they were known.

So – Chelsea and Tottenham. It goes deep.

We arrived at White Hart Lane just after 2pm. Al and Gary bought some chips and we sauntered towards the away end on Park Lane. We soon saw that something was up – the police had blocked the road as an unattended van was parked on the road. There were obviously concerns that this could be a bomb threat. I wondered that if it went off, it would cause £10 worth of damage. The area around Spurs’ ground is far from salubrious. Both sets of fans stood together, though the Chelsea fans tended not to wear colours. However, we were allowed in at 2.45pm with the news that the game would start at 3.30pm.

We had good seats in the upper tier. Noted a lot of familiar faces, including Gerry Kelly, who Cathy has spoken about. Before we had a chance to get into our game, news came through that Scholes had been sent-off at Fulham and Fulham were 1-0 up. The perfect start, eh?

This was only my ninth ever visit to Tottenham. I have been put off from going throughout “the run” in case I jinxed it. The last time I came away from Tottenham tasting defeat was in August 1987 when about 8,000 Chelsea invaded Tottenham hoping to see us stay at the top of the league. In truth, Chelsea had only ever lost once in the league in those 22 years, that narrow 1-2 loss a few years back.

As Gary said during the game, he can’t remember us ever playing so poorly at Tottenham. Modric bossed the midfield in the first-half and Spurs had the best chances, despite a promising start from us. I was surprised that the Spurs support was so quiet – it has been louder in days past. Maybe their recent couple of triumphs over us has extinguished that fire.

We’ll always have that!

Yes, we were really poor in the first half. The formation was again quoted as 4-3-3, but I thought that Anelka and Drogba played quite close in the first twenty minutes. In that spell, it resembled a 4-4-2. Essien played well, but the rest of the midfield went missing.

It was a steak through the heart when Modric drilled home on fifty minutes. At last the home support showed some life. I was confident that we would push on throughout the remainder. Alas, we only really sprang to life late on. We couldn’t fathom how Ballack stayed on throughout the substitutions – yet another awful 90 minutes from the Number 13. We presumed that Essien just hit a wall and had to be replaced. To be fair, Quaresma and then Malouda ( of all people ) did OK in that last period. We pushed on and had a few half-chances. News of a second Fulham goal made things worse, not better.

Yet again, Frank’s set plays were terrible. Can somebody else please take them? No variance in his corners…always lofted so slowly with back spin. Whip it in man!

The game was on a knife edge, but thankfully Spurs did not score a second. That Gomes save from JT and the Alex header onto the bar just made it all the more frustrating. I was getting wound up, shouting my annoyance, yelling my support, getting more irate by the minute.

It wasn’t to be. The Spurs support roared and I felt sick.

We slouched back to White Hart Lane station – Northumberland Park was off limits – and we quietly boarded a train into London. A day of lost opportunities, no mistake. I chatted for a few minutes with Mark, a mate I have known since that 1983-84 season. We talked about a couple of friends who no longer go and had an impromptu post-mortem on the state of the team and the club. Neither of us could fathom how Ballack and Malouda are favoured by every management team we have. Simply baffling. It was good to chat with Mark – with a smile at our predicament, it was a perfect Chelsea way of dealing with our under-achievement.

I said my goodbyes to the boys and headed west on the central line. I resurfaced at Earls Court and walked past a boozer just as Ireland’s dropped goal won them the Six Nations. I couldn’t care less to be honest.

I called in for a meal at Salvo’s. He was pleased to see me. He had been watching the Chelsea game on Italian TV with three Chelsea fans, then the rugby…he was rather merry, to say the least. A couple of Peronis, some sardines and a pizza later and I was in a better state of mind. I was even able to watch the first-half of the Roma vs. Juve game.

A day completely devoted to football.

What else are you going to do on a Saturday? 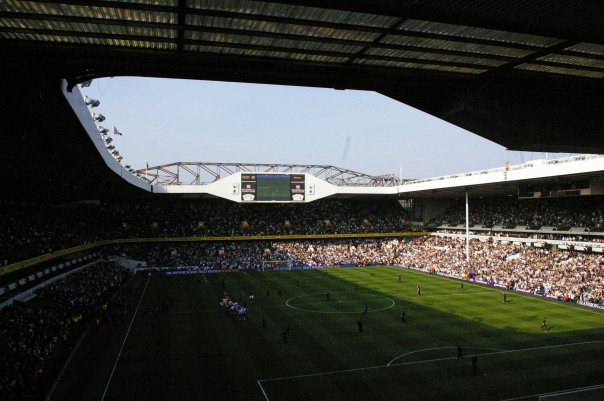