And I thought last season’s game was good!

My colleague Paul was unfortunately made redundant last week and so I have been working solo this week. I am based at my client’s premises and so I did originally think that I may not be able to go to the game as I might be needed to cover the latter part of the afternoon. However, with a bit of trickery and polite conversations with the client, I was cleared for take-off at 2.30pm. I had been in early at 7am anyway – and work is quiet at the moment. I was sorted.

I don’t need to bore you all to death with details of my drive up the country to Liverpool – God, it’s a familiar one of late. I think I have overdosed on Scouse these past four years. Haven’t we all? I went to the knock-out semis in 2005, 2007 and 2008 but didn’t go to the boring group phase game in the autumn of 2005.

In all the visits to Anfield with Chelsea, I have seen us win there just once – that memorable game in 1992, when I got in free and watched, silently, on The Kop. But that’s another story.

I made good time until Birmingham, but from there on in, the traffic was horrific. There were lots of road works, lots of delays, lots of stopping and starting. Andy had downloaded some of the recent CIA Podcasts for me and from Bromsgrove to Knutsford, I listened to the Ken Shellito and Paul Canoville interviews. I really enjoyed them. Lots of great stories. It occurred to me that the history of Chelsea – thousands of players, millions of fans, characters, cups and disasters – were all behind us and that the game at Anfield would be the next instalment in this story…and I took a great deal of pride and satisfaction in the knowledge that I would be part of it. At the cutting edge of this club as it grinds its way into the future.

We all live for the present to a certain extent, but this notion really got to me. I was being part of it. I thought of the – let’s say – millions of people who would be watching on TV around the World and I would be there at the game, within the cramped claustrophobic stands of Anfield. I briefly pondered that my decision to attend was through my fanaticism but also because my finances and health allowed it.

I was very grateful.

The cloudy skies gave way to blue skies over Liverpool as I began the approach into the city at around 6.15pm. It had already taken me much longer than I had hoped. Thankfully, I wasn’t too tired. I texted my mate Alan that I would be in the ground at 7.30pm. Too rushed for my liking. Believe it or not, until I got to within about five miles of Anfield, I had only seen one Chelsea car and two Liverpool cars en route…and the way I identified them? Air fresheners! As I turned onto Queens Drive, I took my Chelsea and Juve air fresheners down – just in case the locals took exception.

I was parked up at 7pm – I thankfully found a space – and the 200 miles had taken me four and a half hours. Up the hill of Utting Avenue, past a busy pub and a few “chippies” and “offies.” There is something hypnotic about joining hundreds of football-goers on the final approach to a game…it’s a clear link to the past. How many millions have walked these same streets. I marched towards the ground. I didn’t want to be late. I was walking in front of a Scouse couple who were having a discussion about the year in which the two clubs first met in the CL. I found it hard to believe that they were unsure. I turned around and said to the woman –

I thought that they were the ones who knew all about history. I tutted to myself as they overtook me.

Chatted to a couple of lads from The Goose – Alan and Nish. There was Lovejoy, as ever, in the middle of it all. Then the two Neils, Sophie, then Alan, Ed and Whitey.

Sam Allardyce walked past – funny, he had been mentioned by Ken Shellito on the podcast, the Bolton game of 1978 et al.

I got inside Anfield at 7.38pm. Just in time. As I walked up the steps, more familiar faces. “You’ll Never Walk Alone” was in full flow as the pitch appeared before me. The usual riot of colour, but with a fair smattering of blue in our section. More scarves than normal. I noted a new Liverpool flag – as we all know, Scousers see themselves as a pretty political bunch – they are red in more than one dimension. The flag said “Scouse Solidarnosc” – after the Polish Solidarity party of around 1981. Quite clever I thought – if you like that sort of thing. I add this, not to make a statement, just to add colour.

I was three or four rows from the rear, just inside the penalty box. A good seat. I stood the entire game.

A terrible start, eh? For the first fifteen minutes or so, our defence were pulled out of shape and a few key errors took place. The midfield were giving the advancing Liverpool players far too much room. I was not alone in my desperate shouts to “close them down!” Ballack – as always – the main culprit. The goal from Torres…horrible. I tried not to watch the home sections leap to their feet, but I couldn’t avoid it. There is some macabre fascination watching other fans go wild at our detriment. Hateful. Before the game – if I was to be pressed – I feared a 0-2 or even 0-3 loss.

And, guess what? We did.

From the sixth minute, our possession increased and we knocked the ball around purposefully and I was amazed with the movement of people like Malouda. For once, chances were being created at both ends and it was a gripping encounter – so unlike other CL games at Anfield. A Cech save down low in front of us, then two Drogba gilt-edged chances in front of the red wall of The Kop. When the second one was blazed over, we gulped in astonishment…not that he had missed, but that we had almost scored!

Chances were exchanged. I was getting carried away, but the bloke next to me was trying to reign in my wild enthusiasm. When Liverpool attacked, we did look a bit suspect. A great game.

Then, a corner – into the near post and a blue player headed home…I thought it was JT to be fair, but who cares? Wild celebrations – an away goal! Behind me, a bloke I had sat next to at Watford – we hugged and yelled wildly. Next to him, I noted a West Country accent – a chap from Swindon.

At half time, word got out that Ivanovic had scored. And Barca were 4-0 up. Gulp.If the first-half was good, the second-half was even better. It was all a bit of a blur really – I hadn’t been drinking, but I was getting carried along on a wave of pure adrenalin. I was getting hot in my warm coat so I took it off and stood in my shirt sleeves. After the equaliser, the home support wilted. Whereas in 2005, when 75% of the Scousers stood, only The Kop did so this time.

I took a few photos of a few attacks. Then another corner down below me…I pointed the camera at the melee of players in the goalmouth. I heard Frank strike the ball and I saw players move. I snapped, then saw the ball thunder into the net, on a trajectory aiming straight towards me. Reina was beaten.

We were 2-1 up. Unbelievable. Un – SWEAR WORD – believable. Our fans went crazy and – I don’t know how I do this – I remained steady enough to take a couple of shots of what I call the aftermath…players hugging on the far touchline, with fans’ arms thrusting in the foreground.

This was unbelievable. What a game. Our movement was brilliant. Even Ballack was doing well. Gerrard was quiet…I have to admit, I wasn’t aware Esien was shackling him man to man. Sometimes aspects of the game pass me by. We were dominating. Then a dream move to my right. We stood on tip-toes as Malouda played the ball in and witnessed Drogba arrive to sweep the ball I with a clinical finish.

I turned around and looked the two guys behind me in the eyes. We were both screaming, mouths wide open, like an incarnation of Munch’s “The Scream.” We kept our gaze going for a few seconds.

My name is Chris and I am an addict. I am a goal addict.

Oh man – isn’t that why we go to football? That moment when we are just transplanted to another place, when our heads just explode.

In the last quarter, we could have scored more. Liverpool were devoid of a plan and on many occasions they lost possession…and there was Frank, running the game from midfield, probing away. I have never seen Florent Malouda play better. Big Pete was as good as any.

Still more chances, but then – shame! – the final whistle. The home support drifted away and we were kept in for a few minutes. By the time I left – I was one of the last few hundred to leave – the home stands were empty, completely devoid of life. We sauntered out into the night and I hugged a few Chelsea acquaintances, names unknown.

Heading down Utting Avenue, past the Chelsea coaches, I pulled up my coat collars. I gave the thumbs up to some Chelsea fans in one coach, then looked towards the back of the coach as a few lads were banging the window. There was Gary and Ed giving me the big one. I punched the air and smiled the widest of smiles.

The traffic was slowly edging past me and within a few moments, as I headed towards my car, the night fell silent. It was eerily quiet, save for my phone jumping to life every minute with incoming texts from England and various parts of America. I got back to my car at 10.15pm and my mate Glenn phoned me. He is always concerned for my safety in Liverpool. Yet more horrendous traffic leaving Liverpool, but I didn’t care.

I headed out onto Queens Drive. Depeche Mode were on my CD.

It was tough going on the way home. I had to buy two Red Bulls to fend of the tiredness enveloping me…they worked. I was euphoric, but well aware that I probably felt just as happy after the Riise game last year. Thoughts were of Barcelona and Rome. What a life.

I eventually got home at 3am, knackered but happy 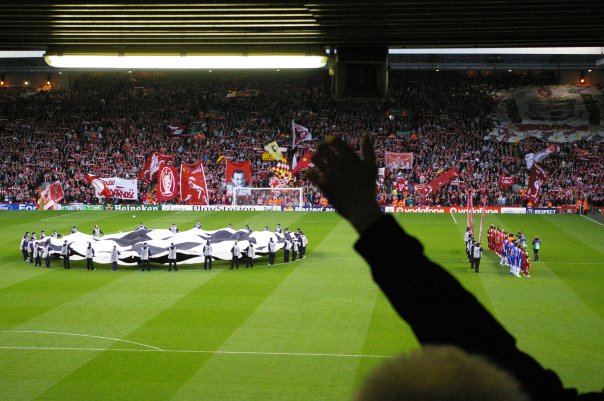