Well, this was a strange old game of football, eh?

In my mind, the league is just too far away and so this game represented a chance for us to just keep ticking over – to fine tune ourselves for the two cup games on the near horizon. Things were really subdued on the car ride up from Frome. It was as if the events at Anfield had sapped all of our collective strength.

Nevertheless, Karen made good time and we were soon scoffing down a breakfast in the café. The towns around Frome were represented by eleven Chelsea fans in the café, to be augmented by three more in The Goose. It was a good showing.

This was a really hectic pre-match in Gooseland. Scouser Reg – the landlord – was subdued…wonder why. I found myself flitting in and out of the bar and the packed beer garden…this was our first home game for four weeks and we had much to discuss. I picked up my semi-final ticket and Rob had tales of flights to Barcelona. Mike from New York was already in the beer garden when we got in at 11.30am – he soon handed out “Sporting News” Baseball Previews to the three baseball fans present ( Neil, Daryl and me ). He also presented me with a Yankees fan guide, to whet my appetite ahead of my two games in July.

I noted that amongst the food outlets at the new Yankee Stadium there was one called “Otis Spunkmeyer” ( freshly-cooked cookies ). There, in a nutshell, is the reason why baseball will never make it in England…it just doesn’t translate.

Mike was joined by a few of his NYBs – Curtis, Karen, Keith and Carrie, plus Dave who I last saw in LA ( he was the one trying to get everyone to do the conga at the Galaxy game ). Then we had Dutch Mick too. One of Mike’s friends was introduced to me – Guido, from Berlin, who comes over for about 12 games preseason. He chatted with my mate Glenn who knows Berlin very well. Parky arrived a bit later, with a lad who was at his first Chelsea game…and I believe he “entertained” Carrie and Karen for a while. It is amazing that I had time to drink anything – a season high seven pints at that. All too soon it was time to set off for The Bridge. I walked down with Henry, a guy I met in NYC last June who know lives in England again.

What were we doing twenty-five years ago? Something similar! Chelsea played Fulham at the Bridge and this was my ninth game of 1983-84 and I travelled up by train with Glenn. In those days, we never went into pubs before the game, mainly due to lack of finances. We used to head for the forecourt and just enjoy the pre-match buzz. Even at that stage, we got to recognise a few familiar faces at every game…some of which I haven’t seen for ten years or more. What happened to them? Priced out, I guess. Before this game, I managed to get Pat Nevin to sign my match programme and I even had the briefest of chats with him. It would be my only chat with my hero until we met in Moscow last year. In 1984, it went something like this.

During that season, we advanced from The Shed into The Benches and we would always be one of the first ones to get to these unreserved wooden benches. On that particular day, we were right at the back – prime seats – and on the half-way line. I think I may have mentioned before that Glenn had been talking to some lads coming back from the Newcastle game a few weeks earlier. As luck would have it – fate? – these same lads were now sat right in front of us. The crowd that day was over 31,000. How amazing…what were the chances? Those lads were Alan and Paul, friends to this day. I think that they were a bit miffed that they had been shunted out of their usual seats to be honest! In that game, twenty-five years ago, Colin Lee scored after the first attack of the game and the duo of Dixon and Speedie had grabbed a goal apiece to give us a 3-0 lead at the break. My man Nevin made it 4-0 in the second-half. It was an easy victory.

It left Chelsea top, ahead of Sheffield Wednesday and Newcastle United on goal difference, but Wednesday had played two games less. Manchester City were seven points adrift in fourth place.

Back in those days, I lingered long and hard at our potential. If we managed to attract 31,947 for Fulham in a Second Division game, how many would we get in the top flight? To be honest, our support turned out to be quite fickle over the next season with many gates below 20,000. How big was Chelsea? Potentially massive…I hoped. Fast forward twenty-five years and we drew 41,000 for a home game yet again.

I noted the New York Blues flag draped over The Shed wall, next to a Canadian flag – I believe it said “Brantford Ontario” or something similar. Also present for the first time was one of the smaller away flags – “Chelsea FC Pride Of London” which was pinned against the grey wall of the Shed as it abuts the West Stand.

The game followed the Fulham game of 1984…4-0 up and coasting. What happened in the last twenty minutes, I have no idea. We just defended awfully.

Of course, I am sure the fact that Liverpool needs to score three goals, yet we let Bolton score three in nine minutes is not lost on anyone. Maybe it can act as a kick-in-the-pants we need.

The crowd seemed quite subdued, apart from when we sang the usual assortment of anti-Liverpool songs. Of course, Ivanovic got a thunderous reception.

On a closing note, the comment of the day came from Alan. He was getting frustrated with Kalou’s participation in the game and his reluctance to play the early ball…

“Kalou wants more touches than Michael Jackson on a sleepover.” 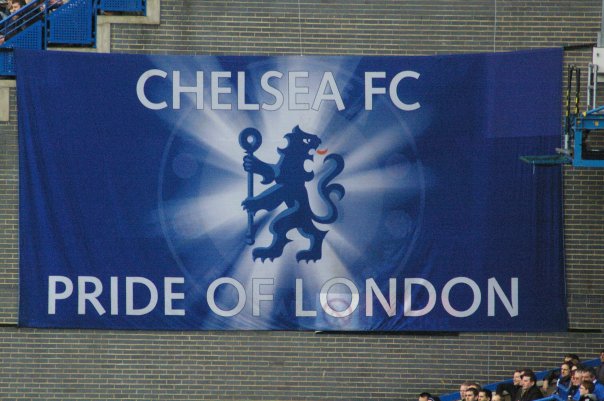