On Saturday, I went with a few Chelsea regulars – with our wives and girlfriends – down for a fiftieth birthday near Southampton. The theme of the evening was ska / two tone and we presumed that a local ska band had been booked. There were about twenty skinhead types milling around…the main man, Alan ( from The Goose ), was wearing a Ben Sherman, jeans, braces and DMs. He looked a picture. Imagine our surprise when a trio of guys in their sixties appeared on stage…the original band couldn’t make it and so replacements were sought. The lead guitarist and singer introduced himself as Beaky from the ‘sixties band Dave Dee, Dozy, Beaky, Mick and Tich…and the music they played was just a total mismatch for the evening. Nobody was dancing! We excused ourselves and headed back to pub where “Tony Two-Tone” was halfway through a Ska / Northern Soul set.

PD, Glenn and myself lit up the dance floor ( stop sniggering at the back!) as the ladies watched dumbfounded and aghast from the sidelines.

I was in a quandary though – I was headed up to London the next morning, so had to watch my beer intake. The last thing I wanted was to be driving up the M4, with alcohol seeping out of every pore. I also needed to protect my unbroken league stretch going for this season…for the first time ever, I am honing in on Game 38 and I had to make sure I wouldn’t fail on Game 36. Funny the priorities at this stage of the season…with just a few games left, I am sure we turn up out of habit, punch drunk from all of the travels and games…on any other year, I could so easily have given this one a swerve.

Glenn drove back to Frome and I, thankfully, wasn’t hung over at all. After a quick change into game gear, I set off and collected Lord Parky from his place at 11.45am. This was therefore going to be a bit of a strange one with a truncated “pre-match.” I hit a bit of traffic nearing London, but was parked up at West Brompton at 1.45pm. It was a hot and sunny day and we were soon on the tube to Holborn.

For every game at Arsenal since about 2002, we have met at “The Shakespeare’s Head,” handily placed a few stops away from Arsenal on the Picadilly Line.

We haven’t had a great record at Arsenal over the years. My first trip to Highbury was the iconic 1984-85 opener and I suppose I have visited Highbury seven or eight times in total, plus two visits to The Emirates. I had yet to see a Chelsea win. Since 1990, we have only won there three times…the first one was the 5-0 League Cup demolition job in 1998, the second one was the Wayne Bridge game in 2004 and the other one was the Robben / Cole 2-0 game in 2005-2006. I was really miffed that I couldn’t get a ticket for that last one. I used to love going to Highbury as I am a big art deco fan and, of course, this was Chelsea’s last ever visit to Arsenal’s grand thirties’ masterpiece. Since that season, I have been an away season ticket holder – I’m therefore guaranteed tickets for all of our games.

I had decided to stay off the beer, so Parky got me a coke. I headed out towards the rear of the pub and there they all were…a fine turn out from The Bing after Wednesday’s sadness…Parky and myself joined eight other close friends, plus Burger and Julie, visitors once again to our shores. I got the impression that I had missed a good pre-match, but I soon felt at home, with updates from the party in Southampton. We had a pretty heated discussion about the state of the club and the way forward. Suffice to say, we doubted that the club was in good hands. We need a long term plan and a manager to stay for more than six months! Hiddink was our choice, but we were not sure if he would stay, for various reasons. Daryl called our current team “Mourinho’s Third Or Fourth Best Team” and we all nodded. I said that Mourinho still haunts us all.

At 3.20pm, Parky and myself set off and our timings were impeccable. Gary, Alan and Whitey had left before us, but we still got there before them…we had left Simon, Milo, Daryl, Ed and Rob with Burger and Julie – just finishing off their drinks / ordering new ones!

Out from the rabbit warren of Arsenal tube and into the bright sunlight. As we walked the five minutes around to the new stadium, I glimpsed the old West Stand on Highbury Hill, now housing apartments. The usual hubbub of match day colours, sights and smells…fanzines, T-shirts, touts and burgers.

Into the concrete coolness of the stadium at 3.55pm – perfect timing. All of us away season ticket holders, all 500 of us, were along the side and I was four rows from the rear, thankfully shaded from the sun. The Gooners were about ten seats to my right. Parky was a few rows in front and there was Les from Melksham, too. Rob and Daryl were fifty yards away, right behind the goal and adjacent to The Goons.

Pre-match, I had predicted that we would be more “up” for it than Arsenal, but the opening exchanges disproved this. We were second best in all areas and I lost count of the number of chances which Arsenal squandered…at times it was laughable, but beneath the smiles and cheers, there was deep concern for us. Gary, alongside me, was especially worried. Mind you, he always is – he always seems to have the troubles of the World on his shoulders, bless him.

“Chels” – our own little word of encouragement to our heroes, which we only ever use at actual games…it really winds me up to see this special little word used out of context so often these days.

I have known Alan for twenty five years and not once has he talked about Chelsea as “Chels” outside of the stadium…ditto Daryl, Gary, Glenn, Walnuts, Rob, Blowmonkey and all. It’s usually only used to tease out a better performance from the team…never as a word to be used to express joy…

“We’re better than this Chels!”

Midway though the first-half, we got a free-kick and I saw Drogba setting himself. A shot? No – a deep cross for Alex to head home! Get in! Virtually our first real effort on goal – beautiful. Soon after, Anelka broke from deep and guided a superb shot in at the far post – easily his best goal for us. Lovely that it was against his old team.

2-0 up and in control – totally against the run of play, even better! Up until this point, Alan and Gary were eyeballing two Goons in our row, about fifteen yards away. Gary was winding one of them up constantly and the Gooner was doing the “outside, I’ll cut your throat” move…of course, at two-nil, the two Goons disappeared from view…never to be seen again!

And – throughout the game – our song of the moment…

Only Chelsea fans could get a song going about missing out on the CL Final – I love this club!

I took a few snaps of Ed, Simon and Milo giving me the “thumbs up” at half-time. For a period in the second, it got a bit surreal, with the singing from our section taking precedence of the action on the pitch. An Arsenal substitution, gave the Chelsea choir another opportunity to get singing. On came Nicholas Bendtner…

The third goal came and it got even better.

Only when did Bendtner score did we hear anything from Arsenal – their support was truly pitiful. The last goal from Malouda resulted in even more home supporters leaving for the exits and it was a joyous sight.

By the time I met up with Parky, we were right at the back of the stampede out…it took forever to get back to west London – not helped by closures on a few tube lines.

Never mind. We called in for a pizza at our favourite Italian at West Brompton – and sat back and savoured a great away day. I always remember my first visit – with Beth – to The Emirates in May 2007, when a 1-1 draw resulted in us relinquishing our title to United…the day of the “chins up” from Jose. Despite losing the title that day, the support we gave the boys made me so proud to be a Chelsea fan.

Fast forward to 2009 and our revenge was complete…

My first ever win at Arsenal – just fantastic. I put Depeche Mode on the CD player on the drive home – we were singing aloud, loving it.

“All I ever wanted, all I ever needed, was here in my arms.” 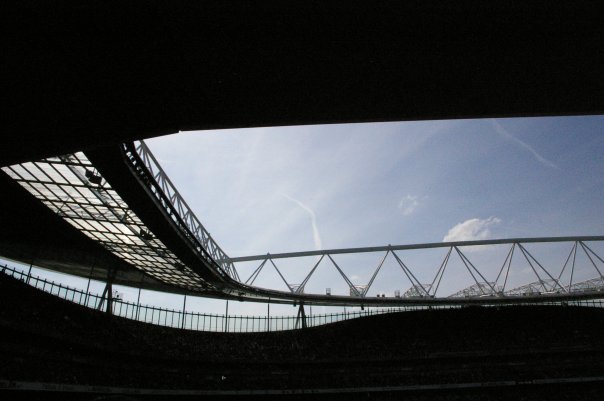