I won’t probably say this too often, but I was far from enthused about the game with Apoel Nicosia. I think I am overdosing on stressful journeys up the M4 on winter mid-week evenings. The fact that we had already secured our berth in the next round probably didn’t help. Dare I say it, but was this to be a meaningless match? We certainly haven’t had too many over the last ten years – we have usually had “something” on each game we have played.

I usually work until 5pm or 5.30pm, but on “Chelsea Nights” I engineer an early departure from my Chippenham office by 4.30pm. Everyone I work with is “cool” with this – they know how much it means, but it comes at a price should we ever lose…nobody lets me off too easily!

Work. A few things to say. My current company lost an extension to our contract last week, but I will be working for the new company. I’m very pleased that my job is safe for the time being, but of course there is no guarantee for my long-term future in the new regime. However, a major downer is that I will lose my company car, plus fuel benefits, in the New Year. I’m pretty sure I will be forced to cut back on the more northerly away games. And I can’t promise my 160-plus home run will extend for too many more games.

The traffic was gruesome in the last hour and I parked-up a 7.15pm. We raced down to meet Wes – from Texas ( “Snipes” on the board ) – outside The So and I gave him his match ticket. He’s over here for a year and was pumped, as you say, to be seeing us play again. No time for any chat – straight inside the stadium.

We had heard on the radio that the 3,000 away fans had been inside the stadium for a good hour. I’m sure that there were a few London-Cypriots dotted around the ground too. They were making a hell of a racket as the game began and they honestly did not let up. One of the best away shows I have seen on European nights for years. I had predicted that the home areas of The Bridge would be morgue-like and I was to be proved sadly correct.

Alan and myself did our best, but even in our section we are the exception and not the rule.

We got the impression that a lot of the regulars hadn’t bothered and Parky, down in the Shed Lower, was to report that his section was “full of tourists.” There was at least one “tourist” in the MHL – Wes was watching his first ever game from that particular part of The Bridge. I hoped he would be in for a fine time.

Our team was a mixture of regulars, fringe players and youngsters. No grumbles really. We have to be pragmatic about this – this wasn’t an important game in the grand plan for the season.

Apoel worked an original free-kick in the first few minutes and then beat our offside trap to go ahead.

The away corner exploded, those vibrant tangerine shirts ( a la University of Tennessee ) bouncing all over. We groaned. Soon after Joey Cole had a headed goal disallowed, but we began getting into the game. That screamer from Ess gave us the equaliser and as he raced over to the SE corner to celebrate in front of the fans, I thought back to the Wolves game when Danny and Beth were close by. How sad that Ess was soon injured – let’s hope he recovers in time for the ANC…wink. Frank entered the fray – the poor chap rarely gets a day off, does he?

I noted a couple of new flags dotted around –

1. Which manager signed Nuno Morais for Chelsea?
2. And against which club did the youngster make his Chelsea debut in the FA Cup third round in 2005?
3. Who were the last club to beat Chelsea at home in the CL – back in 2006?
4. Who was our leading goal scorer in last season’s CL with five goals?

The rain, always a feature of our games these days, increased and I disappeared off for a steak and ale pie. I was mid-way through demolishing this when a nice move was finished with aplomb by Drogs. Excellent stuff. Surely more goals would follow in the second-half?

To be truthful, this turned out to be a weird game. Our play involved many miss-placed passes and a few players were decidedly quiet. Joe Cole buzzed around, but often selected the wrong option. I thought Kakuta was quiet. Ross Turnbull did well to get down and turn aside a wickedly-swerving shot as Apoel never gave up. I was impressed with Fabio Borini when he came on…he did well. For a slight player, he shows good strength. He could teach Kalouless a lesson. Joey whipped in a long cross from the right wing and it rattled the top of the bar, the Apoel ‘keeper back-peddling rather embarrassingly…or maybe he was embarrassed by his ‘eighties hair-style. JT smashed in a goal from close range but this was disallowed too. I was impressed with the way JT quickly sped back to his position with no back-chat. In the resultant move, a mix up allowed Apoel to score and the away corner again exploded. By then, vast sections of The Shed Upper, which had been eerily quiet all game, had decided to slope off home.

I said to Alan that we had been “sloppy” – despite bags of possession – and when I reached home at 12.30am, this was the self-same word that the BBC teletext service had chosen to describe our performance too.

I won’t get too disheartened about this game, but Arsenal last Sunday suddenly seems a long time ago.

Programme Quiz – I got three out of four. 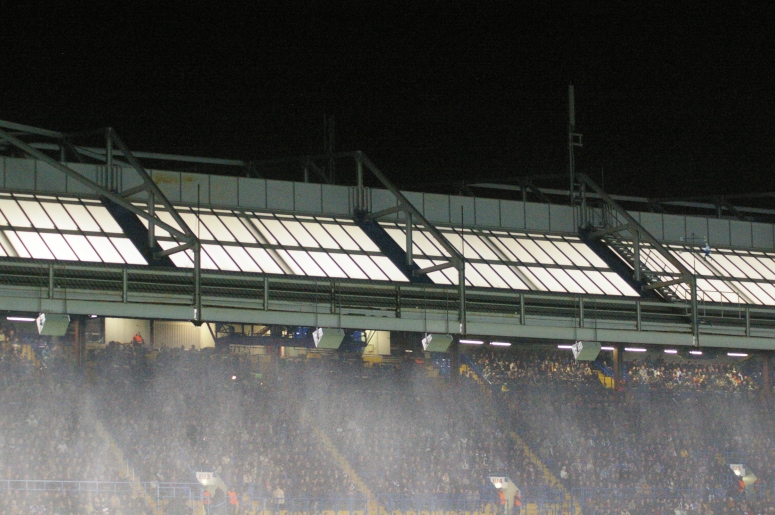