And so there were eight teams left…

I had a busy Saturday, doing a few chores, but managed to sit down and watch the first of the four televised F.A.Cup games. It was nothing to shout about, but I was pleased that Pompey defied the odds to advance into the semis. At around 3pm, my phone rang and there was a young child’s voice on the other end singing “que sera sera, whatever will be will be, we’re going to Wembley.” I soon realised it was my Pompey mate Rick’s young son Matthew. Sadly, Rick has had a tough time of it of late – redundancy from his job and then the shambles of the Pompey administration. Suffice to say, they had both been to Fratton and were dreaming of Wembley once again.

One team through, three to go.

Boy, this was a pretty dull game. I was aware that Steve Azar was watching this with a Fulham mate of his, along with those docile home fans and their pitiful noisemakers. I was able to see this on TV too. A dreadful first-half, but it got a little better in the second. I was cursing Duffer every time he missed those three chances. I was hoping Spurs would fall out of the cup to be honest, but it came as no surprise that they eked out a hard-fought draw.

Both teams went into the bag for the semi-final draw.

On Sunday morning, I made a solo-trip up to London, the rest of my usual match-day companions otherwise engaged. It was a lovely drive up, me alone with my thoughts and The Stranglers on the CD player. On my last final approach on the A4, the main road from Bristol to London, which actually passes a few yards from my workplace, I peeked over at the River Thames, barely one hundred yards away. The winter sun was glinting on the water. With clear blue skies overhead, it was another perfect Sunday in the capital.

The meet was arranged for 1pm in The Goose. I spent a lovely two-and-a-half hours in the pub, chatting with a few Chelsea mates from near and far. Steve soon showed-up, having just about thawed out from the previous night’s game at Craven Cottage. He was lamenting Fulham’s unsurprisingly quiet support. We spoke about the Chelsea / Fulham rivalry “that isn’t” – oh, how it winds up Fulham fans that most Chelsea have a soft-spot for them. A few words with Daryl and Rob, who were chatting with Steve for the first time proper – talk focussed on a few games from the past which threw up a few anecdotes…Rob’s eventual getaway in a bright yellow Ford estate after the Millwall game in 1984 caused much hilarity…also talk of Spurs away in 1975 and Fulham at home in 1976. All of these tales of past games help bind our friendships.

There’s a part of me that would much rather meet up on match days, talk about these games from our childhood when the experiences were wilder and more intense, rather than go to the actual games. I know I’m not alone in this thought. Sometimes the trigger of “Bristol Rovers away in 1980” garners more chat than that for the up-coming game. ( We lost 3-0 and Tony Pulis scored, in case anyone is wondering…) Daryl then told of his father and a few mates from Guernsey hiring an old ambulance ( yes, really ) to tour the venues of Italia 1990 following England. I really should have gone to Italia 1990 – almost the last time I really felt connected to the national team. Steve had been to the England game on Wednesday and how things have changed since 1990. He spoke of jester hats, painted faces and Mexican waves. I stood aghast as he described all this to me. The last England game I saw in person – sitting alongside Daryl – was the “Zola” game at Wembley in 1997. This was Daryl’s last game, too.

Mick ( bluemick ) and his son soon showed-up to join our little group and it was lovely to see him again. I first met Mick in Chicago in 2006 and he now lives in Denver, one of my favourite US cities. We spoke about the 1972 League Cup Final ( we lost 2-1 to Stoke ) and Orient away the same year…not that I remember those two.

Next to arrive was Wes, from Texas, via South London. More stories, more laughter. Glad to hear he was sorted with a ticket for next week against West Ham, where there will be quite an influx of CIAers.

I made the point to Steve that Chelsea’s resurgence since around 1997 has been perfectly timed with the onset of the internet, which has maximised our reach around the globe. Think back to Aston Villa and Everton’s periods of success in the ‘eighties…lost in the ether. Our rapid rise in global support has certainly been greatly aided by the internet.

There wasn’t much chat about the day’s encounter with Stoke. With the League causing us the jitters – and with Arsenal and United winning – I was pleased that we had a Cup tie. Maybe the chance for us to relax a bit, though Stoke would be no mugs.

I had my back to the TV which was showing this game, but was pretty contented to see the un-fancied home team race to a 2-0 lead. However, John Carew ( he played against us for Valerenga in 1999, another away game to remember ) got his act together and Villa had a great second-half. We spoke of the 2000 F.A.Cup Final – against Villa – and how it was such a poor game.

Into the semis went Villa.

We left these stories, and many more, behind as we made our way to The Bridge. For a change, I would be sitting alongside Steve in The Shed Upper. I grabbed a programme. Sad to see that one of the old women who sat quite near me until around 2005 had passed away…people who have John Ingledew’s books will know of her as the “scarf lady.”

We had superb seats, row five, just behind the goal. Probably the best seats I’ve ever had at Chelsea in over 35 years of games, in fact. However, the fact that I was sitting in such a prime location worked against me as I spent the first-half snapping away like an idiot, finding it hard to concentrate on the actual game. I was trying to capture some new angles with my camera…a Paolo cross here, an Anelka dribble there. Plenty of shots of the Stoke defence standing firm as corner after corner rained in.

The Stoke fans were in good voice, although we all expressed surprise that they only brought 3,000 down from my former stomping ground in The Potteries.

I looked over to my left at the towering West Stand, the winter sun lighting up the glass screens. Two things worth commenting on…another new banner ( County Down ) on the balcony, but hundreds and hundreds of empty seats ( yet again ) in the Millennium Boxes. Chelsea really does need to re-market these at a more realistic price. These were the only seats unsold, though, apart from a few pockets here and there. Another full house at HQ.

Stoke had a few chances in the first-half, but we were the stronger side. I was impressed with Anelka and Malouda’s movement, swarming around the Stoke defence, but of course they defended deep and it was difficult for us to break them down. Alex and JT were repelling the bombardment, via crosses from Tuncay and throw-ins from Delap. Good to see Hilario involved with a few stops.

We peppered the Stoke goal – a mere 25 feet away from me – and a deflected shot from Frank gave us a deserved lead at the break. There’s certainly less foot room in The Shed than the MH, though – I had nowhere to leap when Frank scored. From Alan, up in the NW corner, came the expected text message.

To which I replied “COMLD.”

Of course, the away fans were on John Terry’s back the entire game, though even my trained ear for the Stokie accent found it difficult to decipher what they were singing…

Who knows? After Frank swung in – at last!!! – a corner with pace, JT rose like a freshwater fish with pink coloured flesh native to Scotland to plant the ball firmly in the Stoke net. We roared our approval. I had my camera at the ready for his trot back to our half and was able to capture his rolling up of his left sleeve and the stare at the 3,000 away fans. Then the point to the captain’s armband.

Not sure if there was any reference to England – I just think it was a case of saying “I’m the Chelsea captain and I’m not going away.”

Of course, The Shed responded – in clear English.

“John Terry – Has Knocked You Out.”

Into the semis we went. Our ninth such appearance in the past seventeen years – that’s just fantastic. By contrast, from 1970 to 1993 – twenty three years – we made not one single semi-final appearance. JT, Alex and that man Ivanovic were fantastic all afternoon. Let’s hope we are back on track.

As Steve and myself walked back up the North End Road, I half expected my phone to be buzzing with news of the draw. By 6.10pm, all was quiet. If we had got Pompey, my mate Rick would have phoned. If we had drawn Tottenham, all of the world and his dog called spot would have phoned. I surmised, therefore, that it had to be Villa. 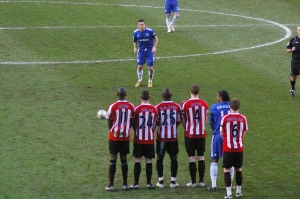