Although this was a fine day out in Chelsealand, the spectre of Jose Mourinho and his Internazionale team visiting us was never far away. It was as if I was thinking about two games at once throughout the entire day.

For a change, my good mate Glenn was driving, allowing me to relax a bit. Because I have been doing a lot of the driving of late, this came as a welcome break for me. Glenn has a VW van and we made good progress in the morning, heading up the M4, with me in the front with Glenn and Lord Parky bouncing around in the back. We hoped that if Parky was seated in the back, alone, he might give us a break from his incessant jabber.

I texted a few of the main protagonists from North America, who would be meeting up at various stages of the day. It would be a big day for a few visitors…more of all that later.

Glenn screeched around the streets of Hammersmith and was soon parked-up at about 10.30am. We park up near the Queens Club – just a few minutes from The Goose – and we noted that the other Frome car, containing Frankie Two Times and Big Dave, was parking a few yards away. Frank commented that Glenn had cut him up coming around the Hammersmith roundabout.

Some things will never change.

Back into the usual match-day routine…straight into the café, soon to be joined by San Francisco Bob, the first of the many CIAers to join us. Bob had been in Rome for a few days and was wearing his latest purchase, a nice dark blue Paul & Shark number. I left Bob in the capable hands of the Frome Four as I had to zip down to HQ to meet Danielle, over for her first ever game at HQ.

The day was gathering speed.

Kent Blues Gill and Burger then sent me updates. It was going to be a manic old day. I met Danielle outside the megastore and we made a bee-line for the Copthorne Hotel foyer, where I knew Ron Harris would be based for an hour or so. We stayed there for about two hours and it was a lovely time. Danielle had her photo taken with Chopper and was able to meet Peter Bonetti, too. The infamous Autograph King, Mick, was also in our little group and before I knew it, we were joined by Pete, Gary and Dave from LA and SF. Next to arrive was Jens, Scott, Tim and Lalo, the Texas contingent. Ex-player David Lee – “Rodders” – was having a drink in the bar, too. One of the highlights of this particular part of the day was Ron Harris winding up Texas Tim by saying the alarm will go off in the hotel if Tim attempted to leave without paying Mick for his match ticket. A lovely memory for Tim to take away with him.

At about 12.30pm, Mick was able to prep Danielle to stand in a prime location for the players “walk-through” down by reception. By about 1pm, Danielle had managed to get around 6 players – plus Carlo Ancelotti – to sign her shirt. Frank signed the back – by his name and number – and added a little “X” too. By the time Danielle returned to the foyer, she needed a sit-down to gather her thoughts. To be honest, it was lovely to see her enthusiasm. I spent some time chatting to Lalo, too – and he was bowled over by the days’ events. I supped up my pint and then headed up to The Goose, passing Mark Worrall’s stall, where copies of “CFCUK” were purchased.

Danielle, Tim and Lalo were going to experience the packed Goose with me, leaving Jens and Scott in the hotel. As I neared the pub, I passed Burger heading down to get his tickets. Into the pub and it was absolutely rammed. I meet Julie, chatting with Jon and Lee, then popped out to the beer garden to see Dutch Mick chatting with Bluemick, mates from Chicago in 2006. Who else? Kent Blues Gill and Graeme were in the thick of it and my usual mates were clustered around too. I gulped down two pints and was able to relax a bit. I had a nice chat with Lalo about baseball, believe it or not. He was loving the pre-match routines that us UK-based fans take for granted. Wes – another Austin Blue – was in The Goose, too. Friends were being reunited everywhere I looked.

Into the stadium and let battle commence.

Of course, West Ham were very poor, so I don’t think we need to write too much into the score. It was a comfortable performance. John Terry was the subject of some typically offensive chanting from the West Ham fans, but within five seconds, the ball was played out to Malouda and his lovely cross was headed firmly in by Alex.

The first-half was a little similar to the Manchester City game. It was all Chelsea in the first 25 minutes, but we then allowed the returning Scott Parker the space to let fly from 25 yards. I said “goal” as soon as it left him.

We had more pressure before the break, with Malouda shining, but no more goals. At half-time, I was positive we would push on, but the mood around me wasn’t so upbeat. I met up with San Francisco Pete, who has a seat in the very back row of the MHU, and we had our usual half-time moan and groan, albeit tongue-in-cheek. Even when it’s bad, it isn’t that bad.

I thought both sets of fans were pretty quiet. Yet again, I didn’t hear a peep from either of the side stands.

A fantastic run from midfield by John Terry was wildly cheered by everyone, and the ball broke to Florent Malouda down below me. I snapped his cross with my camera and it was headed in by Drogba. Didier gathered the ball and ran towards JT, the joy there for all to see. Malouda joined the celebrations and blew a kiss to the Matthew Harding.

Malouda was on fire, in fact. When he gathered the ball outside the box, he took a touch in order to bring the ball under control. This brought a few grumbles of discontent from the seats behind me, but I knew instinctively that he needed that extra touch. A shimmy later and he swept it in. The crowd roared. Just like last spring, our wide Frenchmen is now finding the best form of the season. Long may it continue.

Carlton Cole was widely applauded when he came on as a substitute.

Likewise, when Malouda was substituted, the whole ground clapped him off and it was a joy to see this. As Alan commented, like a lot of wide players, Malouda is such a confidence player and this reception would have touched him. Let’s hope he is warmed by it and can go on to produce another top class performance against Inter.

In the last minute, the ball was swept in by Drogba after a Lampard shot was fumbled by Green. This mirrored the 4-1 win against the same opposition back in 2006…Burger’s first ever game at HQ, in fact. The plus points for me were Malouda’s best ever game for us and a solid performance from the defence. I thought Frank and Ballack were pretty quiet. Maybe they were saving themselves…

We all met up outside the hotel and marched off to Earls Court where post-game activities were planned. First though, a couple of drinks in the Finborough Arms and a chance to chat with Burger, Julie and Danielle about the game we had just witnessed. Danielle loved the noise levels, but I warned her that on Tuesday the volume would be cranked up several notches.

I had booked the downstairs room at “Dall Artista” on the Brompton Road and I think I can say that everyone present had an enjoyable time.

We got stuck into some cold Peronis, then ordered some choice Italian fare. Salvo – as ever – was the convivial host and he was aided by his side-kick waiter from “And Leicester.” As the evening wore on, the fourteen of us ( NY Mike, Burger, Mrs Burger, Tim, Danielle, Wes, Jens, Scott, Lalo, Lord Parky, Mr and Mrs San Francisco Bob, Glenn and myself ) joined in with some choice CFC songs, then had a few toasts to our beloved club.

A few quotes from the evening –

“This has been better than my Prom Night” – Danielle.

“Today was all about the friendships, but Tuesday will be about the game” – Julie.

“The famous Tottenham Hotspur went to Rome to see The Pope” – Burger.

“Carefree” – all fourteen of us.

At around 9pm, Salvo waltzed down the stairs carrying fourteen glasses of champagne, on the house. He was smiling, in that lovely way of his.

We toasted each other and then said our goodbyes out in the cold of Brompton Road. All of the alcohol – Peronis, a Sambuca, a Limocello and an Amoretto -were having a grave effect on me. I slept all of the way home. 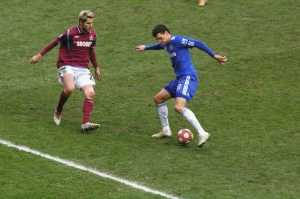