I had booked a half-day holiday and just knew I’d struggle to get everything finished by 1pm. With this in mind, I came in to work early at 7.30am and just wanted to get my head down…try not to think too much about the game…get stuck in. However, the best laid plans of mice and men…when I pulled up at half-seven, Pat Nevin was on the radio, enthusing about the return of Jose Mourinho. I couldn’t escape. It seemed the whole of the UK was waiting for this classic match-up.

For half-an-hour, my head was full of doubts and worries about the game in the evening.

By 8am, work was getting worse…however, the problems I was encountering were at least taking my thoughts away from the match.

By 1pm, I should have left Chippenham.

I then faced a horrible trip up to London, caught in roadworks and traffic jams. I eventually reached Base Camp, aka The Goose, at just gone 6pm. I gulped down two pints and chatted excitedly to some mates from near and far. I made the point that it was such a big game, it seemed only right that the eventual winners be handed a place in the final, not just the last eight. People were nervous. I wasn’t sure which way it would go.

We walked down to the ground, then split up as we all had seats in various locations. I was sitting in the Shed Upper with Danielle.

Thirty-six years ago to the very day – March 16th 1974 – I had seen Chelsea play for the very first time. What fates would befall me, 700-odd games on?

There was an eery air inside the stadium as I chatted briefly to Danielle before the entrance of the teams. In the pub, my mate Alan had passed me a packet of “European Game Lucky Wine Gums” and had cheekilly commented “there you go son, use them if you need to.”

The Inter fans to our right were singing, but their chants were muffled, with so many home fans standing in the way. I’m sure they appeared louder back in from the Matthew Harding. The teams had been announced, the changes noted. Neil welcomed the Inter management team back to SW6. The CL anthem and the teams walked on to the pitch. A lot of the fans had been given flags and these were waved enthusiastically. For some reason, the cardboard cut-outs in the East Middle were given bar scarves instead. Nobody waved these. Why would they? They just sat like statues the entire game. Danielle and myself matched each other photo for photo. A quick chorus of “Jose Mourinho” and I snapped our former idol wave briefly to the Matthew Harding.

The atmosphere was strange. It seemed tense. In the first twenty minutes, the crowd reached 8/10 noise levels, but quickly faded to the 5/10 of a normal league game.

The first-half rattled by with predominant Chelsea pressure – going nowhere – interspersed with rapid breaks and crosses from Inter. I liked the look of our options down the left, with Malouda and Zhirkov beginning to threaten. I snapped a couple of long-distance photos of Mourinho, gesticulating to his attackers. In one uncanny photo, he appeared to be annointing the famous Lovejoy ( who sits right behind the away dug-out ) – his finger appearing to touch Lovejoy’s head as he stretched out his arm.

We had a couple of half-chances as the first-half ended…shots from Malouda and Anelka painfully blocked.

What was up? Our approach play was stilted, Frank was playing too deep, Anelka and Drogba were too far apart. There was no intensity. No pace.

The crowd seems to fade away. We tried our best in The Shed – a few songs…I always try – but nothing constant. Nothing like those historic European nights against Bruges, Vicenza, Barcelona and Liverpool. I had my camera to my eye when the Drogba rugby tackle took place and only saw the aftermath, but the shouts of “penalty” from The Shed were testament enough to the vailidity of the claim. Danielle was swearing like a trooper. The frustration rose.

A youth in the seat in front disappeared off for a few minutes as the second-half began. Who is more worried about getting pies and coffees than watching Chelsea in the Champions League?

I said to Danielle “in desperate times, come desperate measures” and opened up the wine gums. We needed all the good luck we could muster. After an initial flurry, we couldn’t raise our game to the necessary level. We just couldn’t do it. Ballack was woeful and was replaced by Joe Cole, but he flitted around like a butterfly on the periphery.

What a shocking second-half. Our best player by a mile was Malouda, but the manager swutched him to left-back. I don’t understand that. The Inter goal – that fellow Eto’o slamming home from a ball from the impressive Sneider – came as no surprise. Eto’o put us out in 2006 and he did the same, at the same goal, in 2010.

The mood deepened and I sat silent, only rousing myself to sing a couple of defiant songs once Drogba had been sent-off. Many fans left before the end. This report is not dedicated to any of them.

At the whistle, a roar from the Interisti and a song

I was – what’s the word? – gutted, but I’m used to all this by now. Danielle collected a load of flags to take back to Orange County and I bade her a fond farewell and safe travels.

“You make sure you come back.”

I bumped into a stern Tommy Langley outside the megastore and he was lamenting the poor showing of our big name players. We both agreed that Malouda was the only one who appeared to be on song. Too many stars had gone missing. Outside the Kings Arms, a blockade of police on horseback were guarding several hundred Inter fans who had obviously watched the game on TV in the pub. A few shouts and scuffles. On the walk up the North End Road, I felt sick at the sight of many Chelsea fans smiling and laughing. Where is the hurt you fools? Where is the pain?

I met up with Steve Azar, Mike Neat, Bob Clark and Joe ( from San Antonio – his first ever game ) outside The Goose and we sloped over for a curry at a nearby Indian. Dutch Mick was already eating. A friendly smile from Mick – he’d seen it all before, too. There was a funereal air for the first twenty minutes, but Joe’s high spirits took our mind off the dire game we had sadly witnessed. We devoured our curries and eventually we spoke of the match. No positives. Not this time. We need to refresh the team in the summer. It then dawned on me that my Euro travels were over for another season, but with probably no US Tour either. Further groans. Joe is over for about a week and is soon off to Manchester. I ran through a few tourist options for him. However, when I told him that we would be playing at nearby Blackburn at 4pm on Sunday ( his flight leaves on Monday ), his eyes lit up. In one moment, despite the pain of Mourinho’s return, I had moved on and was making plans for Ewood.

Screw the JCLs and the cluless “fans” who so annoy me. Let’s get myself amongst the 3,000 loyalists.

Blackburn Away – Mow That Meadow. 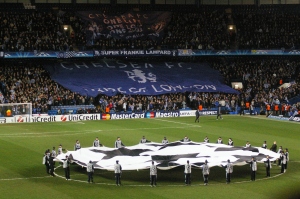