This was another working week which would begin and end with a Chelsea match. As with a memorable week last May, with a game against Middlesbrough on the Monday and a game against West Brom on the Friday, we were faced with two matches on the same two days. First up were The Baggies at home. We were desperate for a win to put an end to our little blip. A win would then see us nose ourselves ahead of Tottenham and into fourth place. The visitors were rock bottom of the Premier League. What could possibly go wrong?

Nothing, we hoped. Nothing at all.

I didn’t honestly care if we would scrape to a 1-0 win. I just wanted a win to take some pressure off the manager, the players and not least us, the supporters. The two recent losses to Bournemouth and Watford had certainly been lingering heavily on everyone’s minds the past week. Not only a nadir, but a nadir oh dear.

Other weighty issues had dominated my thoughts after the Watford loss. The chest pains that I mentioned during the Watford match report thankfully subsided throughout the past week, but on Friday I popped into my local community hospital to book an appointment to see a doctor. I needed reassurance that there was no problem. After explaining the symptoms, I was given a few tests. I explained to a doctor that my late father had suffered a history of heart problems. Without further ado, the doctor decided to take no risks and sent me in an ambulance to Bath to undergo further tests.

As can be imagined, this was quite a shock. At the time, I felt relatively OK. But I was – I suppose – relieved that I was in good hands. Thankfully, after a couple of hours spent in the A&E department of Bath’s Royal United Hospital, and after my fourth ECG of the day and some blood tests, I was released with an all-clear. No abnormal heart condition. Just high blood pressure, but that can be treated. The conclusion – from myself anyway, and possibly from the medical staff too – was that I had suffered from too much stress at work. As I reached home that night, I promised myself to try to improve my health via diet and exercise. And not get overly-stressed at work. Writing this again now, I am sure it was all to do with work.

[ A voice from the gallery : “Are you not going to make a comparison between you lying on a hospital bed and a critical stage in Chelsea’s season? You like a metaphor.”

The Chuckle Brothers were back in town.

It was a bitterly cold night in SW6. Glenn and I darted up to the stadium to meet up with a couple of friends. We briefly chatted to Ray Wilkins, a massive hero for us both in our childhood. During the day, Glenn had decided to throw caution to the wind and join me in an antipodean holiday in July, loosely based on our friendly with Perth Glory in July. We gabbled away with travel plans as the cold Winter air brought shivers.

Back in “Simmons” the clans had gathered. I quickly popped into “The Cock Tavern” to meet up with Al and his son Nate from Toronto, both attending a Chelsea game at Stamford Bridge for the very first time. Al has been following these reports for a while and wanted to meet up. Their enthusiasm about seeing us play was clearly evident. I used the well-worn line –

“Of course, if we lose, you’re not allowed to come back.”

The temperature had dropped further as we walked to Stamford Bridge.

No surprises, the away end was full of empty seats. My guess was at about eight hundred at most. We were inside early, and I hoped that the empty seats in the home areas would eventually fill. Thankfully, in the main, the stadium filled. Yes, there were empty seats throughout the stadium, but no yawning gaps anywhere.

Happy with that. Happy that the new boy Giroud was starting. Alvaro was on the bench, as was Emerson.

For all of the negativity surrounding the club of late, it was just lovely to hear “Blue Is The Colour” being played with five minutes to go. That song just makes me smile. It takes me right back to those formative tears as a Chelsea supporter. It strikes a real chord.

The lights darkened and the teams then appeared from the shadows. Over in the south-west corner of The Shed, a “FORZA CONTE” flag was held over bothy tiers. Very soon into the match, the home supporters rallied behind the manager.

This was never honestly going to be a noisy night but I was warmed by the support that was cascading down from the stands. This was music to my lugholes.

Very soon into the game – within two minutes or so – Daniel Sturridge was forced to limp off after an early twist or strain of a muscle. The bloke looked dejected as he made his way down the tunnel. I almost felt sorry for him.

Over the first fifteen minutes, West Brom caused more problems to us than we did to them. They had a couple of meek efforts on Thibaut’s goal. We got out of it unscathed. We managed to get into the game with Pedro as lively as ever. Giroud was involved, showing a willingness to create space for others to find him, and linking up well with others.

The noise levels were still pretty good. We kept urging the team on. This was pleasing.

Dave sent in a couple of fine crosses into the West Brom box, and they almost paid off. Quick comparisons of Giroud with Morata and Batshuayi were hard to resist. The new boy looked more robust than Alvaro and had more guile than Michy. For a big man, his touch looked fine. The best chance of the game was gifted to Giroud by Hazard, but his side-footed effort was straight at the ‘keeper Ben Foster. Pedro was fouled, but a tame free-kick from Eden hit the wall.

With Chelsea looking to move the ball quickly after a West Brom attack, a defender pushed the ball on to Victor Moses. As one, I heard the entire Matthew Harding Stand mouth the word “attack”; it was almost Pavlovian. Sadly, the wing-back floundered further up field. How frustrating.

On twenty-five minutes, I whispered to Alan :

“We’re not playing too badly to be honest. Lots of possession, but not a great deal of incision.”

Soon after, there was a daring overhead effort from Giroud at the far post. The new boy was certainly truing his hardest to endear himself to us. He was then sent sprawling onto the turf and ended up with a wide white bandage over his forehead. A header from the same player went wide. It was all Chelsea now. West Brom appeared to deflate. Jonny Evans was booked for a nasty, late tackle on Giroud, who writhed in agony in the centre-circle. He had been consistently fouled throughout the first forty-five minutes. At this rate, I expected him to appear at the start of the second-half with an eye patch, a neck brace and his arm in plaster.

What a treat for us all at the break. Neil Barnett announced that three of the players due to take part in a “legends” game against Inter in May were to appear together on the Stamford Bridge pitch. 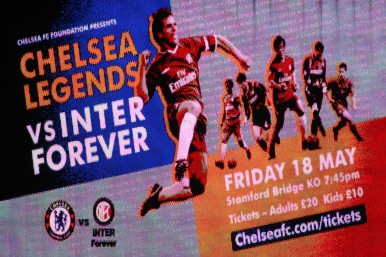 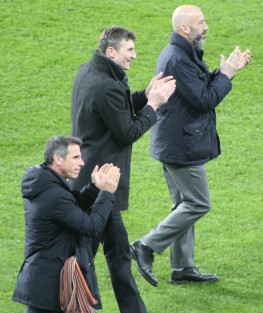 They slowly walked towards us in the MH and I snapped away like a fool. Each were serenaded with their own songs. They lapped it up. My goodness, it is the twentieth-anniversary  of our wonderful ECWC triumph in Stockholm, one of my favourite seasons. It is hard to believe in these days of single-strikers and “false nines” that in 1997/1998 we had the considerable luxury of four strikers.

And five if we include Mark Nicholls.

Bloody hell, those were the days. A two-man attack. Beautiful. Let’s get to basics here; I’d much rather see two top strikers in a starting eleven for Chelsea rather than two top holding midfielders. Who wouldn’t?

That season, we were certainly blessed. And each of the four had their own qualities, and it was always interesting to see how Ruud, and then Luca, chopped and changed the front two.

Zola –  those amazing twists and turns, those dribbles, that appreciation of space, those passes to others, those goals.

Vialli – those blind-sided runs, the constant movement, the strength of that body, the willingness to run and run.

Flo – surprisingly skilful on the ground for a tall man, his touch was excellent and he weighed in with his share of goals.

Hughes – the last of his three seasons with us, but still useful for his strength in hold-up play, his galvanising effect on the team, and eye for a goal.

Glory days indeed. I loved that team and I idolised those players in a way that I simply do not do with the current squad. And I could probably write a book about the various reasons for that.

If anyone had said to me in 1998 that, twenty years on, only one of those players mentioned would get into my team of greatest ever Chelsea players, I would have screamed madness.

The second-half began with a couple of scares at The Shed End, but a fine block from Dave and a poor miss by Rondon meant that we did not concede. An Evans header from a corner flew well wide. As with the first-half, we weathered the early storm – nay rain shower – and got into the game. At times Giroud seemed too eager to play the ball to team mates rather than maintain possession and battle on. Maybe the ghost of Diego Costa lingers on.

The manager chose to replace the battered centre-forward on the hour and on came Alvaro Morata. Things became a little nervy, and the crowd was well aware that we were still leading by the slenderest of margins. There was a nervousness in the stadium. Things were not falling our way. A fine move involving the twin threats of Eden and Pedro allowed Alvaro to blast at goal.

Just after, Moses worked the ball in to Cesc and his attempted flick deflected off a defender and in to the path of the wing-back who had gambled on the return pass. His finish was cool.

Moses was clearly boosted by this goal. If ever there is a “confidence player” in our squad at the moment, it is Victor Moses. He quickly followed up with a fine shot on goal.

With twenty minutes to go, Eden broke past his marker, right at the edge of the penalty area, and sent an unstoppable shot low into the goal. There was so much venom in his shot, that the ‘keeper did not move. Similar to his effort at Watford, he used the defender as a block for the hapless ‘keeper. He just didn’t see it.

A rasping shot from Morata brought a save from Foster. The Spaniard was lively in his thirty minutes on the pitch. More of the same please. There was another shot from Moses. It stayed 3-0.

We were back in fourth place.

Out on the Fulham Road, a hot dog and onions went down well, and we scampered back to the waiting car.

I messaged Al from Toronto.

It had been a good night.