Our midweek League Cup match against Nottingham Forest would be our fourth of seven games in the month of September. It would certainly be a chance for manager Antonio Conte to rest some regulars and try some youngsters. But once the draw was made, though, I certainly toyed with the notion of missing this game against Forest.

I did not attend a League Cup home game against Bolton Wanderers in 2014 and that was probably the only first team home game since around 1995 that I simply – to put it bluntly – decided to avoid it. For all of my other games that I have missed – they number around fifteen – there were always extenuating circumstances; holidays, work, my mother’s ill-health.

But without too much thought nor deliberation, I paid my £25 for the ticket. The Forest game did not really excite me, though. It hardly had me giddy with excitement.

When I explained this to Glenn over the previous weekend, he asked me –

“Why are you going then?”

It was a tough question. Why was I going?

Is “because I can” too flippant a response? I don’t know. My lack of clarity didn’t really bother me…maybe, one day, it will all make sense though?

Just like games against teams such as Sheffield Wednesday and Leeds United, it is a rare fixture indeed these days. Once proud members of the top division, the former European Champions have experienced troubled times over the past two decades, even dipping into the old Third Division at one stage. Our last meeting was in the FA Cup in 2007, when we won 3-0 at the Bridge. Their last season in the top flight was 1998/99. It certainly seems a long time ago.

In the pubs before the game, we again wondered if the apparent full house would materialise. Yes, we had heard that the game had sold out, but I knew for sure that there were a fair few spares floating around. Nottingham Forest had taken a hefty allocation – fair play to them – but it meant that Parky had been shifted from his seat in The Shed Lower. The 4,250 away fans, as has happened on other League Cup nights at Stamford Bridge the past three seasons, were to be placed in the entire lower tier and also the Western half of the upper rather than the usual Eastern side.

Good news – outside Stamford Bridge at about 7.15pm, the roads were as crowded as usual. There was the usual hubbub of pre-match activity. There were a few miserable looking touts seeking to offload some spares. I can spot their miserable faces a mile away. And although I was hoping for a good gate, I paradoxically wanted them to be unable to sell their tickets.

I was inside early. The place was almost empty.

Thank heavens, as the minutes ticked by, the stadium filled and it filled me with a great deal of pride. There were only 24,000 at the Tottenham vs. Barnsley game the previous evening, but here was a robust attendance of around 38,000 to 40,000. Well done us.

The manager certainly mixed things up. There were fresh faces everywhere and an all-Belgian attack to boot. Eden Hazard was to have his heralded first start of the season.

After his indiscretion in China, it certainly seems that Kenedy has been given an olive branch to extend his stay at Chelsea. There is no doubt that he is one lucky boy; he is surely on thin ice though.

Just before the teams were announced, Neil Barnet spoke about Forest’s famous and iconic manager Brian Clough. The game, poignantly, was taking place on the thirteenth anniversary of his sad passing in 2004. There was a black and white image on the TV screen and there was warm applause from both sets of fans. What a character Brian Clough was. I have spent hours watching clips of him on “You Tube” over the years. It is ironic that after achieving legendary status as a goal scorer with Middlesbrough and Sunderland and then as a manager with Derby County and Nottingham Forest, the only film devoted to him details his brief and inglorious spell as Leeds United manager in 1974.

On came the teams.

Forest’s shirts seemed to have a very rosy hue – lighter, pinker than I remember them – and there were early ‘eighties pinstripes too.

Alan and myself soon spotted a Walker playing up front for Forest.

“Wonder if that is Des Walker’s son. Looks like him?”

It was – a Google search confirmed it.

It wasn’t – again Google to the rescue.

We wondered if somewhere in the midst of Forest’s youth teams were players called Josh Shilton, Benny Burns, Bradley Birtles, and Wayne Wigley.

File under “I expected great things from him part 529.”

The Forest fans were making a fair bit of noise as the game began and it didn’t take long for the nonsense to start. They bellowed “WWYWYWS?” at us and we soon replied with a “You’re not famous anymore.” I remember back in 2007, a few old school Chelsea got the famous “We hate Nottingham Forest” chant going, but I think that one has now passed away, and discarded into the great rubbish bin of obsolete ‘seventies football classics. It was one of the first, generic, football chants that I can ever remember singing, at school in around 1972.

We hate Liverpool too (with an optional “they’re shit”).

But Chelsea we love you.”

After just twelve minutes of good Chelsea pressure, with a couple of efforts on goal, a fine move involving Charly Musonda, Tiemoue Bakayoko and Antonio Rudiger developed down our right. Rudiger looped in a hard and deep cross and Kenedy met it on the volley, but cushioned it past the Forest ‘keeper Henderson rather looking to break the netting. It was a fine goal.

Alan, conjuring up a Shane Meadows “This Is England” tone : “They’ll have to come at us naaah.”

There were further words from Alan –

“Ah, I always remember where I was when Kenedy shot and scored.”

Not long after, we worked the ball to Eden Hazard who picked out Batshuayi inside the box. The ball was deflected towards Michy who deftly struck home. At that moment, it seemed like the game was already won. The Chelsea crowd in the Matthew Harding immediately relaxed and invited both side stands to “give us a song” and, then, The Shed. A Zappacosta goal was ruled as being offside.

Every time Forest got past the halfway line, there was a noticeable roar. This always happens when lowly teams come to Chelsea. You almost feel like saying “bless them” but there was a time when Chelsea fans, very much aware of our status as underdogs, would also purr at a rare attack against stronger teams. And I miss those times.

Forest were awarded a free-kick about twenty-five yards out and Kieran Dowell crashed a rasping curler onto Caballero’s bar. The rebound was ballooned over. It was a rare Forest attack.

Kenedy shot over. Bakayoko forced a low save. Five minutes before the break, Fabregas picked out the lively Musonda who took one touch and walloped a shot past the luckless Henderson.

I watched as Musonda set off on an ecstatic run, away from the usual celebratory zone of the corner flag, and towards the halfway line, his arms spread, his smile wide. What a lovely few moments for the lad. 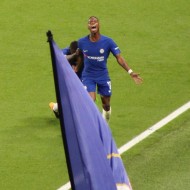 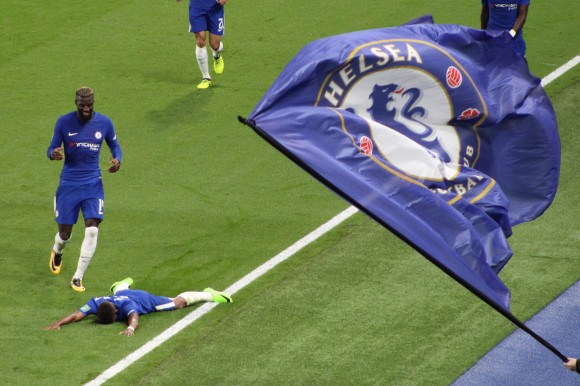 A stupendous long ball from Fabregas set up the raiding Musonda again, but his effort dropped just wide.

The second-half began and it really was all Chelsea again. Hazard, twisting in the same style and in the same position as his shot at Cech on Sunday, was denied by the post. Rudiger, impressive again, raked a long shot over. Seven minutes into the half, Fabregas lofted a ball towards Hazard – it looked offside to me – and we watched as Eden advanced on goal. A shot would certainly follow. He was forced wide but had the presence of mind to stop and set up Batshayi, whose low shot gave us a deserved 4-0 lead.

You had to feel sorry for Forest. I felt for Mancienne, being humiliated by his former employer. Down in front of us, we often pulverised their defence, with not only Musonda and Kenedy doubling up, and playing one-twos, but with Eden Hazard also involved. There were over-the-top back heels, indulgent one-twos, chips, mazy dribbles, everything. Musonda looked particularly impressive; lively and assured, comfortable on the ball, yearning to set up a dribble and hurt Forest again. Top marks.

On came Ethan Ampadu – a new signing from Exeter City – and his big hair reminded me of Mike Brolly c. 1973. He looked confident too, although his long-passing did not reach Fabregas levels of efficiency.

To their credit, Forest had a couple of chances.

Their fans were involved again, singing their take on “Mull Of Kintyre.”

Oh mist rolling in from the Trent.

My desire is always to be here.

The Matthew Harding demanded another song from them –

There were a couple of Forest long shots but we were not wholly bothered. Kenedy capped a fine performance down the left with a whipped shot from an angle which smacked the bar, with the ball dropping onto Batshuayi and over the goal.

“He never misses from there.”

The celebrations were rather muted. A hat-trick for Michy but the easiest goal he will ever score.

Spoiling the purity of a clean sheet, Forest scored in what would prove to be the very last kick of the day, with Darikwa slotting home.

We all agreed that it had been a fun night. We had witnessed some great attacking football and the whole game felt a little different, like something from a parallel universe. As we reached the car, we soon learned that we had drawn Everton at home in the next round. Happy with that. No complaints. 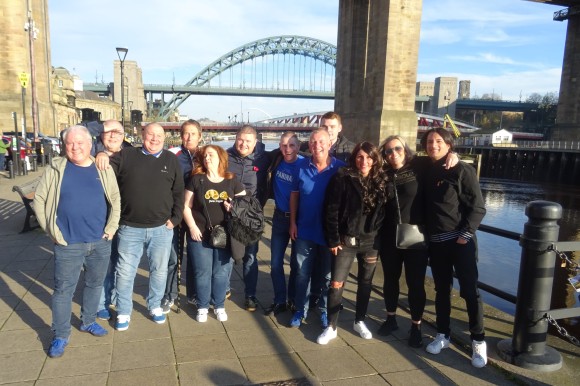 Chelsea supporter, diarist, photographer, traveller, but not necessarily in that order.